Brazil's Guarani suffer at the hands of violent ranchers

For the Guarani, land is the origin of all life. But violent invasions by ranchers have devastated their territory and nearly all of their land has been stolen.

Guarani children starve and their leaders have been assassinated. Hundreds of Guarani men, women and children have committed suicide.

The Guarani were one of the first peoples contacted after Europeans arrived in South America around 500 years ago.

In Brazil, there are today around 51,000 Guarani living in seven states, making them the country’s most numerous tribe. Many others live in neighboring Paraguay, Bolivia and  Argentina.

The Guarani people in Brazil are divided into three groups: Kaiowá, Ñandeva and M’byá, of which the largest is the Kaiowá which means ‘forest people’.

They are a deeply spiritual people. Most communities have a prayer house, and a religious leader, whose authority is based on prestige rather than formal power.

The ‘land without evil’

For as long as they can remember, the Guarani have been searching – searching for a place revealed to them by their ancestors where people live free from pain and suffering, which they call ‘the land without evil’.

Over hundreds of years, the Guarani have travelled vast distances in search of this land.

One 16th century chronicler noted their ‘constant desire to seek new lands, in which they imagine they will find immortality and perpetual ease’.

This permanent quest is indicative of the unique character of the Guarani, a ‘difference’ about them which has often been noted by outsiders.

Today, this manifests itself in a more tragic way: profoundly affected by the loss of almost all their land in the last century, the Guarani suffer a wave of suicide unequalled in South America.

The problems are especially acute in Mato Grosso do Sul where the Guarani once occupied a homeland of forests and plains totaling some 350,000 square kilometers.

A Guarani community describe the threat posed by gunmen, hired by the ranchers who stole their land.

Today they are squeezed onto tiny patches of land surrounded by cattle ranches and vast fields of soya and sugar cane. Some have no land at all, and live camped by roadsides.

In the last 500 years virtually all the Guarani’s land in Mato Grosso do Sul state has been taken from them.

Waves of deforestation have converted the once-fertile Guarani homeland into a vast network of cattle ranches, and sugar cane plantations for Brazil’s biofuels market.

Many of the Guarani were herded into small reservations, which are now chronically overcrowded. In the Dourados reserve, for example, 12,000 people are living on little more than 3,000 hectares.

The destruction of the forest has meant that hunting and fishing are no longer possible, and there is barely enough land even to plant crops. Malnutrition is a serious problem and since 2005 at least 53 Guarani children have died of starvation.

Brazil has one of the most highly-developed biofuels industries in the world. Sugar cane plantations were established in the 1980s and rely heavily on indigenous labour. Workers often work for pitiful wages under terrible conditions. In 2007, police raided a sugar cane alcohol distillery and discovered 800 Indigenous people working and living in subhuman conditions.

As many indigenous men are forced to seek work on the plantations they are absent from their communities for long periods and this has a major impact on Guarani health and society. Sexually transmitted diseases and alcoholism have been introduced by returning workers and internal tensions and violence have increased.

Over 80 new sugar cane plantations and alcohol distilleries are planned for Mato Grosso do Sul, many of which are to be built on ancestral land claimed by the Guarani.

The Guarani in Mato Grosso do Sul suffer from racism and discrimination, and high levels of harassment from the police. It is estimated that there are over 200 Guarani in jail with little or no access to legal advice and interpreters, trapped in a legal system they do not understand. This has resulted in innocent people being condemned. Many are serving disproportionately harsh sentences for minor offences.

The response of this deeply spiritual people to the chronic lack of land has been an epidemic of suicide unique in South America. Since 1986 more than 517 Guarani have committed suicide, the youngest just nine years old.

Crowded onto tiny reservations, with appalling social consequences, many Guarani communities have attempted to recover small parcels of their ancestral land.

These ‘retomadas’ (literally ‘re-takings’) have been violently resisted by the powerful and ruthless farmers who now occupy the region.

The ranchers frequently employ gunmen to defend ‘their’ properties, and countless Guarani have been killed during or soon after the retomadas.

The small community of Ñanderú Marangatú is typical. Despite the fact that the community is entitled by law to live within a 9,000 hectare reserve, they were evicted at gunpoint by ranchers in 2005. With incredible bravery, the community returned.

They now live on a tiny fraction of what is legally theirs, and the area immediately surrounding their settlement is patrolled daily by the rancher’s gunmen, who have also raped two of the Guarani women and fired bullets into the house of one of the community’s leaders.

See Survival’s report to the UN which outlines the Guarani’s shocking situation.

The story of Marcos Veron

‘This here is my life, my soul. If you take me away from this land,  you take my life.’ Marcos Veron

The killing of Guarani leader Marcos Veron in 2003 was a tragic but all too typical example of the violence that his people are subject to.

Mr Veron, aged around 70, was the leader of the Guarani-Kaiowá community  of Takuára. For fifty years his people had been trying to recover a small piece of their ancestral land, after it was seized by a wealthy Brazilian and turned into a vast cattle ranch. Most of the forest that once covered the area had since been cleared.

In April 1997, desperate after years of lobbying the government in vain, Marcos led his community back onto the ranch. They began to rebuild their houses, and could plant their own crops again.

But the rancher who had occupied the area went to court, and a judge ordered the Guarani out.

In October 2001, more than one hundred heavily armed police and soldiers forced them to leave their land once more. They eventually ended up living under plastic sheets by the side of a highway.

While still in Takuára, Marcos said, ‘This here is my life, my soul. If  you take me away from this land, you take my life.’

His words came  prophetically and tragically true early in 2003, when, during another attempt to return peacefully to his land, he was viciously beaten by employees of the rancher. He died a few hours later.

Veron’s killers have not been charged with his murder, but they were charged with lesser crimes related to the attack, following a court hearing in early 2011.

Act now to help the Guarani

Your support is vital for the Guarani’s survival. There are lots of ways you can help.

News from the Guarani 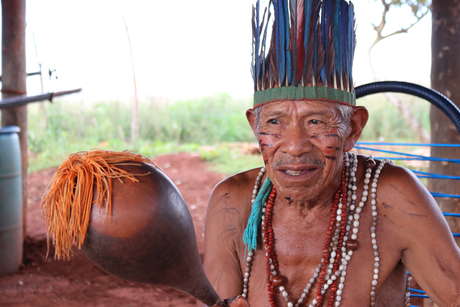 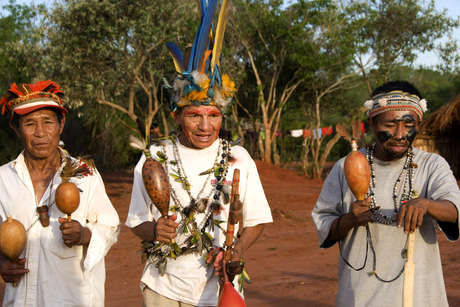 Brazil: the Guarani and a decade of broken promises

The Brazilian authorities’ failure to identify the Guarani's lands continues to have a terrible impact on the tribe. 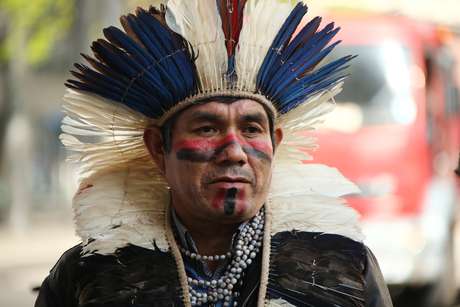 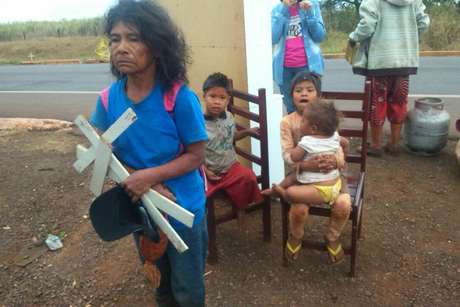 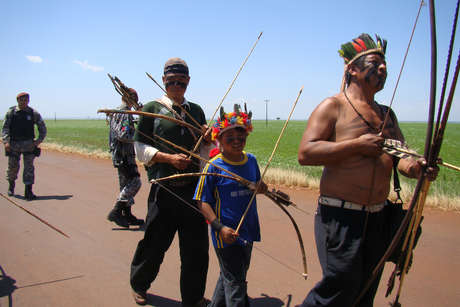