“How could we harm the forest? We’re the ones that save the forest. As long as we are here, the forest will be fine. We are the defenders of the forest. If we leave, who will protect the forest?”

The lives of hundreds of thousands of tribal people (Adivasis) in Indian tiger reserves are being destroyed in the name of conservation. The Indian government is illegally evicting them from the land where they have always lived and that they have always protected (Modi’s government is attacking Adivasi rights in other ways too).

They are accused of harming wildlife. But, far from killing tigers, many tribes worship them as gods and take care of their environment better than anyone else. Where tribal people’s right to stay in a tiger reserve was recognized, tiger numbers soared.

The Forest Department cannot grow good forest like us. For centuries we have protected the forest. Only Adivasis protect the forest. Without Adivasis they cannot do any conservation
Soliga, BRT Hills Tiger Reserve

Mising women have spoken out about the harassment of the forest guards and the threat of eviction from their ancestral land. Kaziranga National Park. © Survival

Indian law specifically protects Adivasis’ (tribal peoples’) right to remain on their ancestral homelands. But these laws are not respected. Many tribal people are living in constant fear of being imprisoned, tortured, beaten or shot just for carrying out their daily activities. Forest Officers subject them to racism, violence, and abuse.

The big conservation organizations are supporting this and claiming the relocations of tribal people are “voluntary.” It’s a con. Evidence proves that, in many cases, these relocations are in fact forced evictions.

But the forest and the tribes cannot survive without each other. Steal the forest from the tribes and their way of life and extraordinary knowledge are annihilated. Remove the tribes from their land and, as they tell us themselves, the forest will also disappear.

Chenchu woman from Pecheru village. The village was evicted in the ’80s. The Chenchu report that of the 750 families that used to live in the village, only 160 families survived after the eviction took place. Many starved to death. Nagarjunsagar Srisailam Tiger Reserve. © Survival

The officials said that if we didn’t leave, they would have to force us out of the area
Baiga, Achanakmar Tiger Reserve

For years Survival has been campaigning against evictions and leading the international fight against these abuses. Now we need your help. Together we can change this damaging model of conservation so that it respects tribal peoples’ rights: for tribes, for nature, for all humanity.

Learn more about the tribes living in Tiger Reserves 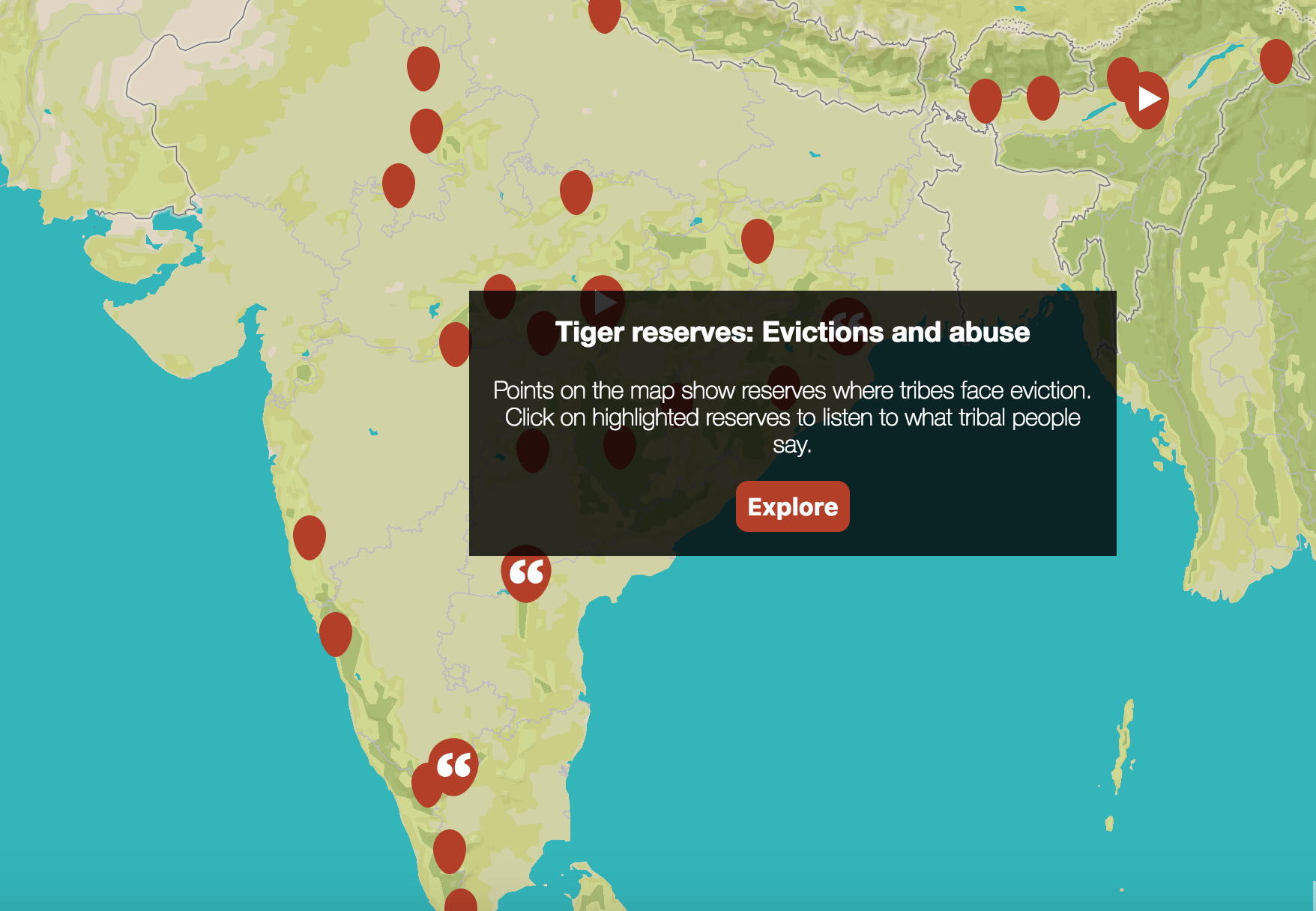 Sierra – The national magazine of the Sierra Club, Michael Benanav, ‘Can Tribes and Tigers Coexist in India’s Nature Reserves?’
Hindustan Times, Danish Raza,‘The Horns of Dilemma’
Down to Earth, Ashish Kothari, ‘In the name of tiger’
Guernica, Mark Dowie, ‘Eviction slip’
BBC News, Justin Rowlatt, ‘The park that shoots people to protect rhinos’
The Hindu, Reeja Radhakrishnan, ‘The Killing fields of Kaziranga’
The Guardian, Michael Connellan, ‘The human cost of India’s tiger conservation policy’
Outside, Rowan Jacobsen, ‘Number One With a Bullet’
The Hindu, Nitin D. Rai and C. Madegowda, ‘BRT forests have changed radically. Is the fire ban to blame?’
The Ecologist, Tom Linton, ’India’s indigenous evictions – the dark side of the Jungle Book’