It is with great sadness that we announce the death of Virginia Luling, Survival volunteer 1969-1989, Africa Case Officer 1989-2004, a ‘great soldier of human rights’.
Obituary by Survival’s Director, Stephen Corry

‘Bourgeois Anglo-American’ was how Virginia described herself in a typically self-effacing manner. It could not be less revealing about a woman whose life was characterised by a deep internationalism, altruism, self-sacrifice, and ego-less humility.

As a PhD student in anthropology, Virginia was one of the very first people to become involved with Survival after its launch in 1969. For ten years, she loyally ran the Surrey Local Group, modestly describing her fundraising as ‘mostly organising jumble sales’. Having already given us many years of voluntary work – six of them editing our newsletter – Virginia gradually moved onto the staff, finally accepting a position as Africa Case Officer towards the end of the 1980s. Until she retired in 2004, her years were peppered with field trips, always carried out with fortitude and gusto, invariably on the thinnest of shoestrings, using the cheapest possible local transport and accommodation (or none!). It was Virginia who undertook the first Survival visit to the Botswana Bushmen, later to define so much of our work in the 1990s and 2000s. Her first night in the Kalahari was spent sleeping soundly under the stars next to the broken vehicle leaving her Bushmen companions huddled inside, out of reach of marauding lions!

Ogiek tribespeople in Kenya say they will forever remember her for her role in building the network of human rights activists that would eventually become the Ogiek Welfare Council. In the words of their tribute to her on her retirement, ‘Your contribution to our success is immeasurable.’

Virginia can also be credited for collecting one of the best quotes about Survival from a tribal person anywhere: a tribesman from Tanzania told her, referring to our new logo, ‘Every time I see those big fingers, I feel happy.’

A trip to Ethiopia in the 1980s to investigate allegations of a large-scale government programme of forced resettlement would have yielded few results for those with less resolve and ingenuity, but Virginia saw through her government monitors and published several damning reports which brought the scandal to the world’s attention.

It is for her work in the Horn of Africa that she is perhaps best known outside Survival. Her fieldwork in Afgooye, Somalia, and Ethiopia’s Oromo region at the beginning of her career sparked a lifelong association with the area, whose peoples and conflicts were always with her. Virginia was secretary of the Anglo-Somali Society, and – as an expert on clan provenance in Southern Somalia and a Somali-speaker – she provided expert testimony and reports for hundreds of asylum cases. She was also heavily involved with the Oromo Relief Association for decades, and supported Oromo refugee children in Kenya to go to school. 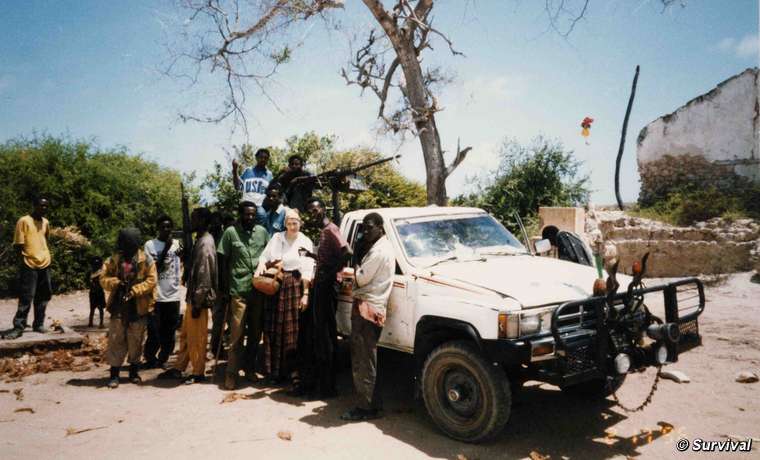 With her typically unshowy courage, Virginia made several trips to Somalia during the country's civil war, on one occasion even being supplied with bodyguards by the local warlord! © Survival

As well as the dedication and commitment Virginia showed towards tribal peoples, she still found time for other interests. Growing up with a novelist mother, Sylvia Luling (née Thompson), and an artist father, Virginia had many literary connections, and was herself an excellent writer. As well as her thesis, ‘Colonial and post-colonial influences on a southern Somali community’, she had many works published, including a series of children’s books (Surviving Peoples) and dozens of papers and essays on Somalia. Her first degree was in English language and literature, and, having studied under JRR Tolkien, she was active in the Tolkien Society. Her paper for the centenary conference, ‘An Anthropologist in Middle-Earth’, analysed his works as a vision of an un-Westernised Europe and was characteristically witty.

Virginia was not always quite as fashionable and ahead of her time as she was in her appreciation of Middle-Earth, as she would be the first to admit. When asked by a Bushman for her opinions on the O.J. Simpson trial she had to enquire as to who he was; and on hearing in a meeting that Survival was using a ‘fulfilment house’ (where catalogue goods are packed and sent to supporters), she exclaimed, ‘I don’t know what a fulfilment house is, but it sounds wonderful!’

Her uncanny ability to appear to nod off in particularly boring meetings, and then suddenly awake and interject immediately and entirely appropriately, was the envy of us all (considerably more so than was her motley pooch ‘Stubbs’ who, having grown so decrepit with age that he couldn’t be left at home, was finally forced to accompany Virginia to the office to, doubtless, his own dismay, and ours as well).

I have long maintained that Virginia is the only person in Survival’s first 44 years to whom the organisation is truly indebted, and I am grateful to have had the chance finally to tell her so, and to say my goodbyes just before she left London for the last time. She was utterly selfless, and unwavering in her commitment to tribal peoples in the face of adversity. Certain Asian traditions define this type of person as ‘bodhisattva’. Needless to say, Virginia would have been astonished at the epithet, and not acknowledged it for one moment. But she was – and it was certainly a privilege and an honour to know her.

A group of Oromo friends drove England’s length in a hired minibus to visit her shortly before she died. Imbued with a quiet grit and determination, Virginia faced her final illness with the same courage, dignity and fortitude that she faced gun-toting Somali warlords, African dictatorships and Kalahari lions.

Survival has given her name to a rolling internship position to encourage young campaigners to follow in her giant footsteps. She will not be forgotten.

Survival staff and committee members send their deepest condolences to her family.

A selection of tributes from the field

It was not an easy task altogether to have fought so bravely to restore confidence to the much oppressed Ogiek in late 90s during the era of dictatorship.

We shall dearly miss her as our mentor … who never left any stone unturned in the pursuit of human rights. May almighty God rest her soul in eternal peace. We shall live forever to remember her.

I wish convey our heartfelt condolences for the great soldier of human rights. Ogiek peoples will always remember her because of her humility and as a fighter for Indigenous peoples.

May the almighty God save her soul.

I’m sorry to hear about Virginia and send condolences from the Bushman of the CKGR. We are in mourning with her family.

We have heard of the passing of Virginia Luling. This is a great loss to African Indigenous peoples, the human rights community, no doubt to all of you who worked with her at Survival, and her family.

Please accept our most profound condolences.

You can donate online to the Virginia Luling Internship