“Listen to Native people. Learn both sides of your celebrated history. Do the hard work of abolition to help heal our nations.” — Richard Archambault (Standing Rock Sioux and Muscogee Creek) 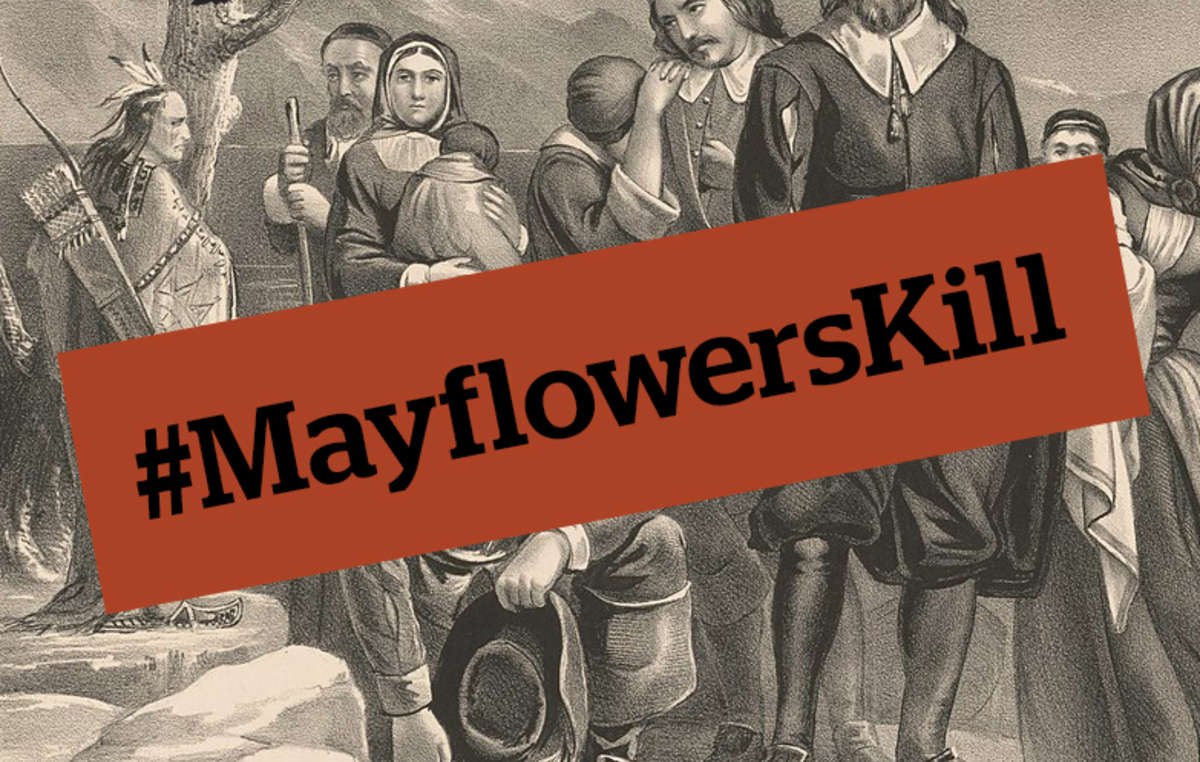 The MayflowersKill campaign is a partnership between tribal members in the U.S. and Survival International to amplify the story of Native American genocide internationally, reveal how it’s now being repeated in other continents, and show how it can and must be stopped. © Survival

Most everyone has heard the story of the Mayflower — how the Pilgrims came to the “New World,” fleeing religious persecution, and planted the seeds that would one day turn into the American Dream. What most people don’t hear about, however, are the centuries of genocide that followed and the wars waged against Native Peoples, that killed up to 90% of the Indigenous population. They don’t hear about the continued colonization still going on in parts of the world or the legacies that history left behind in tribal communities. By continuing to celebrate the Mayflower’s colonial history each Thanksgiving, we ignore the truth of what happened here, the trauma and tragedy that followed and continues today.

“…the story casts indigenous people as willing and helpful assistants, but never equals. This brazen retelling of events lays the groundwork for the massacres and forced relocations of the original inhabitants of this country in order to portray American expansions as magnificent instead of the merciless invasion that it was.” — Lawrence (Northern Paiute — Pyramid Lake)

You may be wondering, “Why can’t we leave the past in the past?” or think to yourself something along the lines of, “Get over it.” My response is this: Those same sentiments that tried to eliminate Tribal Nations not too long ago are still embedded in our laws and policies. In 2005, the Massachusetts legislature repealed a 330-year-old law banning Native Americans from entering Boston. Yes, 2005. Just this year the Trump Administration moved to dissolve the Mashpee Wampanoag reservation altogether in the midst of the COVID-19 global pandemic. Meanwhile, the Aquinnah Wampanoag still fight for their right to game on our ancestral homelands, an opportunity that would provide much needed funding for Tribal services and programs.

“You would do well to remember who helped the Pilgrims survive, to remember our collective obligations to Indigenous treaties and to honor those agreements and celebrate that history, not one that celebrates a lie.” — Anonymous (Lac Courte Oreilles Ojibwe)

Today, Native Nations across the U.S. are still reclaiming what colonialism stole: sovereignty, land, culture, language, and so much more. The Wampanoag and other Native Peoples are still here, and our survival is not by chance. It is a testament to Indigenous resilience and the sacrifices and compromises made by our ancestors. And, while Tribes fight to reclaim parts of our pasts, Americans continue to celebrate the very colonization that stole our futures.

“It means the beginning of the end of tribal sovereignty and land stewardship. Along with many, many other losses.” — Nicole (Standing Rock Hunkpapa Lakota)

Now, I won’t suggest we all stop celebrating Thanksgiving as a time for gratitude, family and food. We can even keep the name if you’d like, but we have to stop acting like it’s based on this romantic origin story about cultural sharing. It’s not, and until we unpack America’s mistreatment of Indigenous Peoples, and the harmful myths that emerged from erasing half of a history, we can’t begin to address the tragedies colonialism left behind or understand why it’s being repeated elsewhere in the world.

“Understand that not everyone in this country is able to celebrate this moment in history with you. We do look forward to a day where an honest look at history and an attempt at understanding and reconciliation will bring healing and peace.” — Brian (Delaware)

We must also recognize the devastation of colonial contact because it is still happening as an equally deadly genocide continues elsewhere. There are over 100 uncontacted Tribes in the world, most living in the Amazon rainforest, but they are under increasing assault. Loggers, miners, and ranchers look to invade their lands, while missionaries seek to force contact and governments aid and abet in their destruction. This is no accident. Brazil’s President Bolsonaro “declared war” on Indigenous Peoples and in the words of Kamutaja, a member of the Ãwa tribe in Brazil: “We cannot die like this. We cannot let the colonizers get rid of us. They came and colonized but the process never ended…” Yet, the reason is as simple as it is familiar: the theft of Native land and resources. While the lives and livelihoods of uncontacted Tribes grow more threatened every day, Americans are celebrating the myth of Thanksgiving, under the misguided presumption that contact is a time for sharing and gratitude rather than violence and mourning.

“It’s virtually a miracle we are still here. We are the descendants of a People who survived attempted genocide- the loss of our Ancestors’ lives, the erasure of our spirituality, culture, lands, and natural resources, all to a distorted perception of western superiority and a self-declared divine right to dominate other people. We are painfully aware that history cannot be allowed to repeat itself.” — Chairwoman Cheryl Andrews-Maltais, Aquinnah Wampanoag

400 years from now, we will not celebrate COVID-19. There won’t be any fireworks or parades or re-enactments of this pandemic. The world will mourn what happened and the lives that were lost. We must invoke this same tone, this same grief, when we reflect on the Mayflower and what it meant and means to so many people. 2020 marks more than just tragedy and the 400th anniversary of the Mayflower’s arrival on Wampanoag land. It can also mark the beginning of a new perspective on what that history really means. It can mark the end of celebrating historical mistruths and instead supporting Indigenous Peoples in their fight to reclaim what was and continues to be stolen.