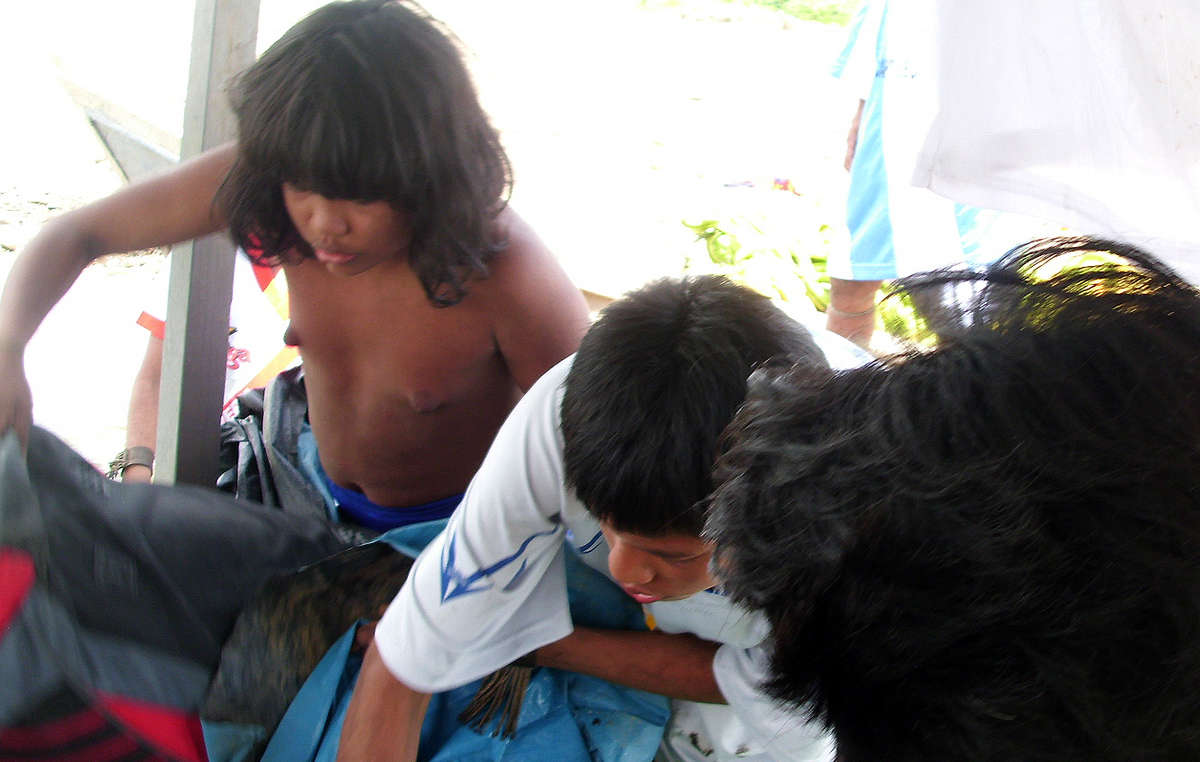 Uncontacted Mashco-Piro have taken clothes and food from outsiders, putting them at extreme risk of contracting fatal diseases to which they have no immunity. © Jaime Corisepa/FENAMAD

A highly vulnerable uncontacted tribe in Peru’s southeastern Amazon has been contacted by a missionary, raising fears that the Indians have contracted fatal diseases which could wipe them out.

According to local reports, an Adventist missionary from a local Indigenous community arrived on a boat – owned by tour company Expediciones Vilca – and left clothes and food for the uncontacted Mashco-Piro Indians on the border with the Manu National Park.

Images of the encounter last Saturday, September 6, have surfaced, which show the Mashco-Piro taking the clothes and food brought by the tour boat.

Only two weeks ago, Survival International, the global movement for tribal peoples’ rights, and local Amazon Indian organization FENAMAD, warned of the dangers of “human safaris” and increasing encounters between outsiders and the uncontacted Indians. 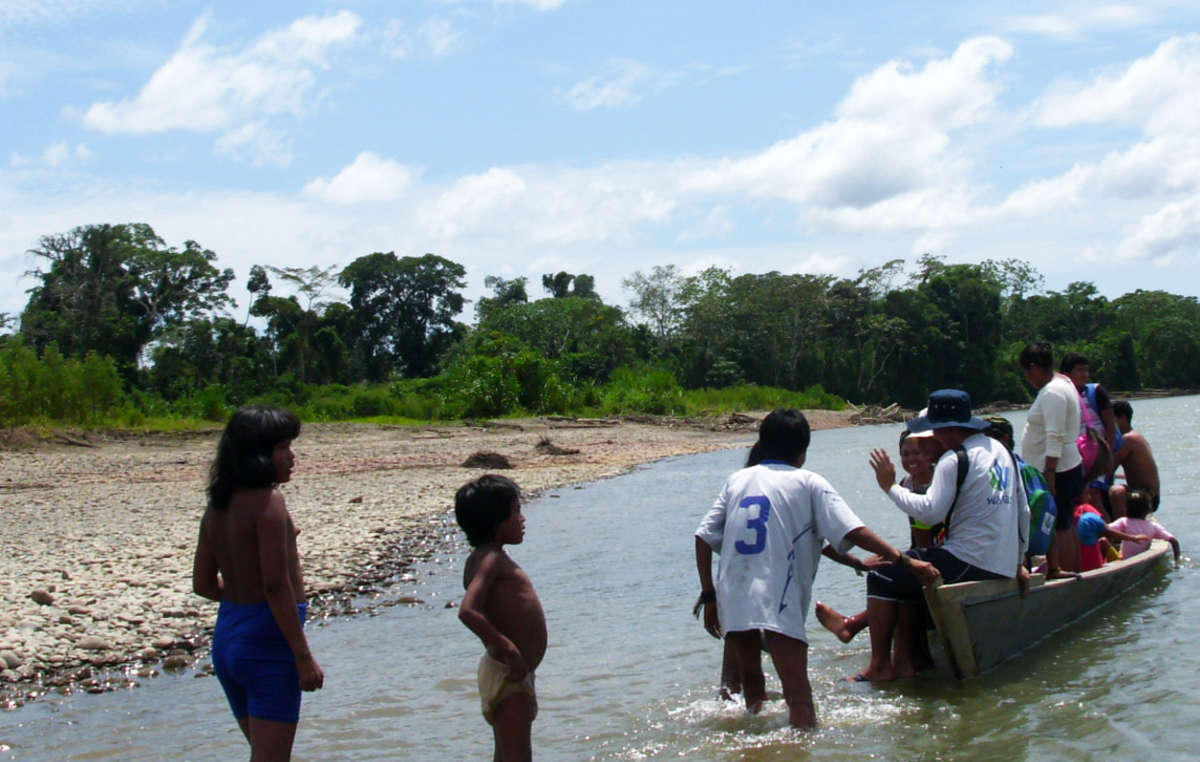 A boat carrying local people stops on the riverbank near the Mashco-Piro. The Mashco-Piro children have put on the clothes they have been given. © Jaime Corisepa/FENAMAD

But the Peruvian government has failed to take action, and an emergency meeting between FENAMAD and Peru’s Ministry of Culture about this issue was cancelled last week by Viceminister Patricia Balbuena.

Tourist boats regularly pass along the Madre de Dios river where the Mashco-Piro have been spotted. Clothes, food, and even fizzy drinks and beer have been left for the Indians.

Uncontacted tribal peoples like the Mashco-Piro are the most vulnerable societies on the planet. Peru’s approximately 15 uncontacted tribes are threatened by violence from outsiders who steal their resources and diseases like flu and measles to which they have no resistance.

Last month, a group of uncontacted Indians thought to have fled from Peru made headlines when they made contact with a settled Indigenous community in Brazil. The Indians immediately contracted an acute respiratory infection for which they were treated. 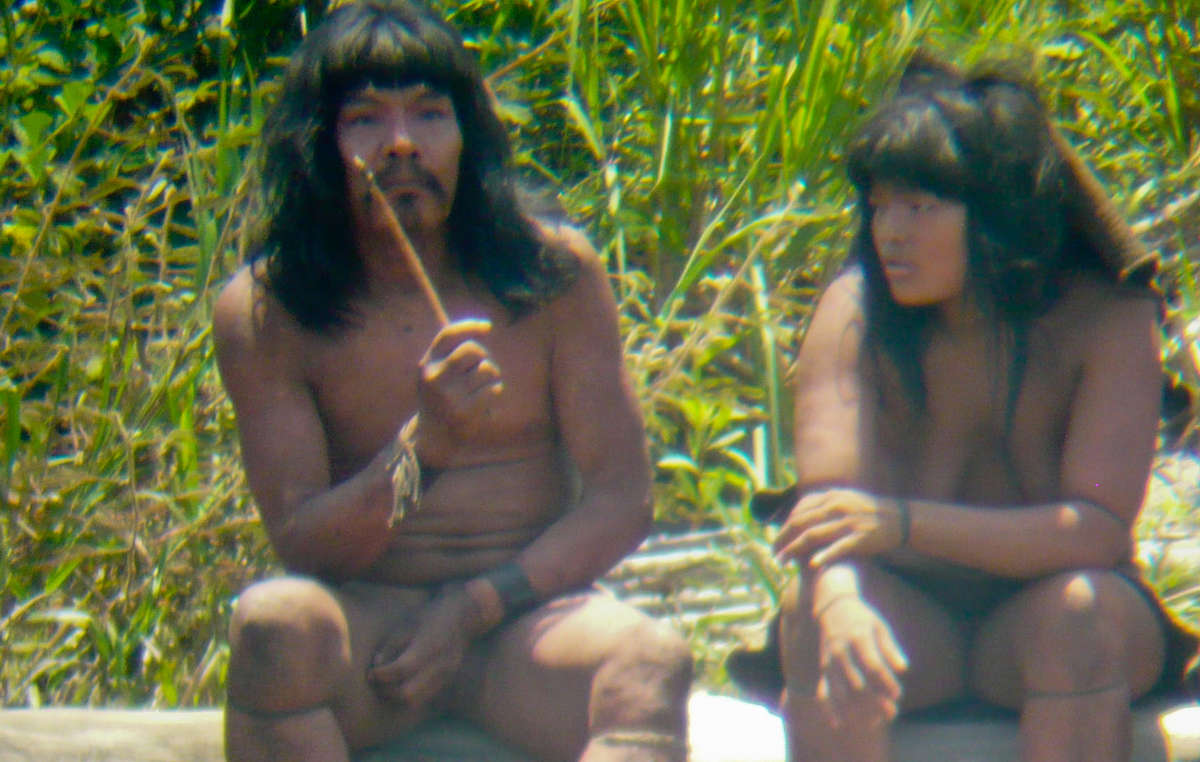 Like all uncontacted tribal peoples, the Mashco-Piro face catastrophe unless their land is protected. © Jean-Paul Van Belle

Survival and FENAMAD are calling on the Peruvian authorities to stop tourists and outsiders from entering this area; to implement an emergency health program to prevent the outbreak of a fatal epidemic among the Mashco-Piro; and to enlarge their protected territory as a matter of urgency.

Survival’s Director Stephen Corry said today, “Missionaries insisting on clothing ‘naked savages’ is the most enduring metaphor for the colonial destruction of tribal peoples. Clothes can not only carry disease, they can make illness worse for people with no tradition of wearing them. Indians too sick to hunt risk sitting around in perpetually damp and unwashed clothes which can exacerbate the infections which have already killed millions of Indians in the Americas. That this is still happening today is a crime which must be stopped. If Peru doesn’t ban tourists and people like this missionary from going anywhere near the uncontacted Indians, its government risks complicity in the annihilation of yet another Indian people.”

- Over 12,000 people have sent an urgent email to authorities in Peru and Brazil urging them to protect the land of uncontacted tribes.