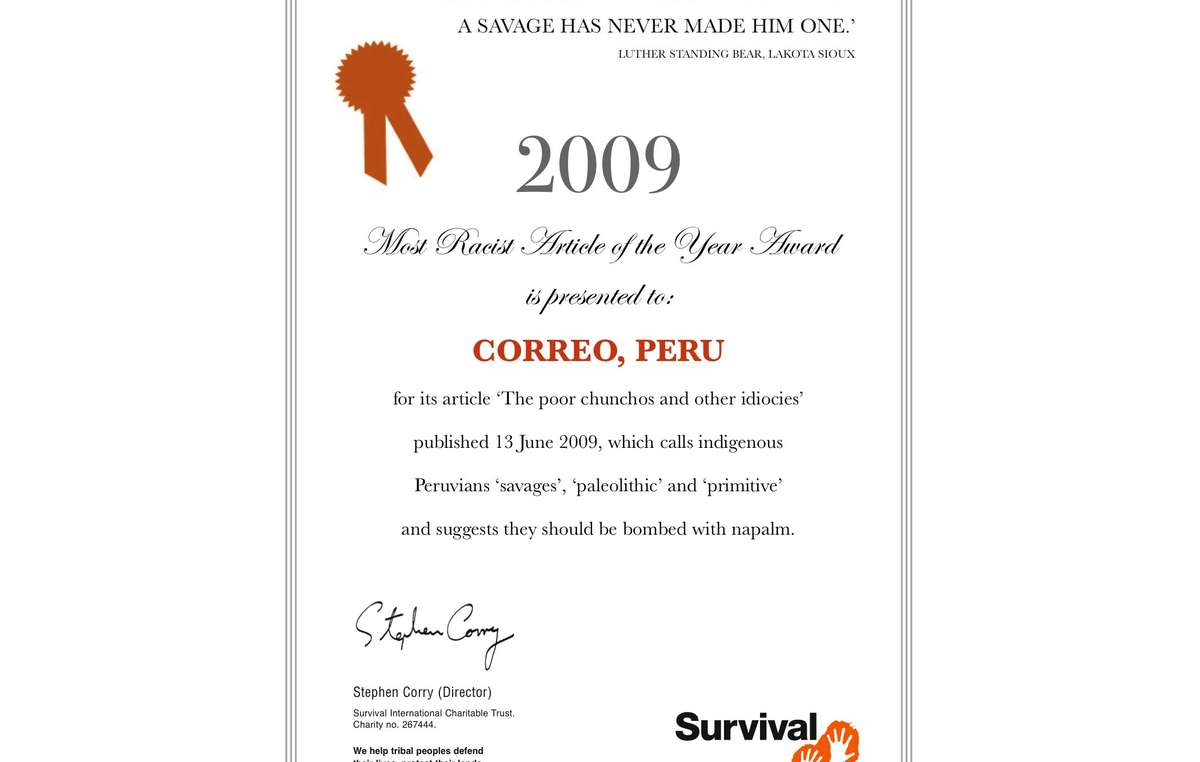 Most Racist Article of the Year Award 2009, presented to Correo newsaper, Peru. © Survival

An article implying Peruvian Indians should be bombed with napalm has been named by human rights organisation Survival International as the ‘most racist article’ published in the last year by the mainstream media.

The article was published in the Peruvian national newspaper Correo. It calls Indigenous people ‘savages’, ‘Palaeolithic’ and ‘primitive’; says that their languages have no more than eighty words; and declares that, in the protests that have recently engulfed much of Peru’s Amazon, they were manipulated by ‘communist excrement’.

‘For those of you who still think of these ‘ethnic groups’ as ‘good’, ‘naïve’ and ‘pure’, I will remind you that it was these same people who perfected the art of shrinking the heads of their enemies and wearing them on the belts holding up their loincloths. If the ‘natives’ didn’t shrink the heads of the policemen they killed (in the recent protests) and eat their remains, it was only because there wasn’t time.’

The article also attacks three Indigenous congresswomen, ridiculing their names and referring to them as the ‘three starlets in the parliamentary sewers’. Its response to the Indigenous protests against the exploitation of natural resources on their land is: ‘Get f****d, loincloths and all’. The penultimate sentence is: ‘I don’t know what keeps the president from providing the air force with all the napalm necessary.’

The ‘most racist article of the year’ award is part of Survival’s ‘Stamp it Out’ campaign which aims to challenge racist descriptions of Indigenous peoples in the world’s media. The winner receives a certificate inscribed with a quotation from Lakota Sioux author Luther Standing Bear: ‘All the years of calling the Indian a savage has never made him one.’

Stamp it Out is supported by eminent journalists such as the BBC’s World Affairs correspondent John Simpson, George Monbiot, John Vidal, and best-selling authors Tim Butcher and Simon Garfield.

Survival’s director, Stephen Corry, said today, ‘This article makes depressing reading for anyone who thinks newspapers should educate and inform their readers. We hope the publicity this award receives will make the paper think twice before printing such offensive rubbish again.'

Read an English translation of the article