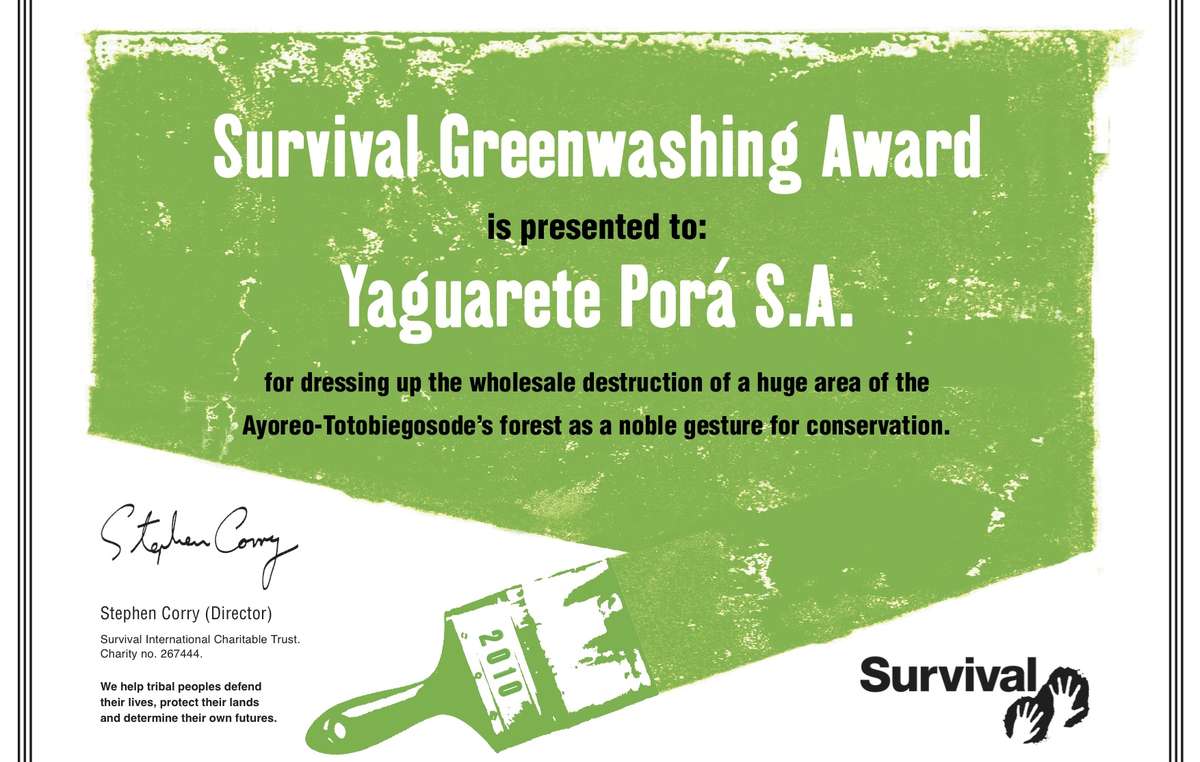 This page was last updated on January 20, 2010 and may contain language which is now outdated.

The company, Yaguarete Porá S.A., has won the award for ‘dressing up the wholesale destruction of a huge area of the Indians’ forest as a noble gesture for conservation’, says Survival’s director Stephen Corry.

Yaguarete owns 78,549 hectares of forest that is part of the Ayoreo-Totobiegosode tribe’s ancestral territory. After satellite photos were published around the world revealing that it has destroyed thousands of hectares of the tribe’s forest, the company issued a press release announcing it intends to create a ‘nature reserve’ on its land.

But plans submitted by Yaguarete to Paraguay’s Environment Ministry reveal that the amount of ‘continuous forest’ in the reserve will be just 16,784 hectares out of the 78,549 hectares total, and the company in fact plans to convert around two thirds of the land to cattle ranching.

Some of the Totobiegosode have already been contacted and vehemently condemned the plans for the ‘reserve’, pointing out that it violates their rights under both Paraguayan and international law. The contacted Totobiegosode have been claiming legal title to this land since 1993, but most of it is still in private hands.

The Totobiegosode are the only uncontacted Indians in the world having their territory destroyed for beef production.

Survival director, Stephen Corry, said today, ‘This is textbook ‘greenwashing’: bulldoze the forest and then ‘preserve’ a bit of it for PR purposes. The public won’t fall for it. Yaguarete should stop playing games and pull out of the Totobiegosode’s territory once and for all.’

550,000
Hectares claimed through the courts by the Totobiegosode

57,000
People around the world who have signed a petition in support of the Totobiegosode

16,784
Hectares of ’continuous forest’ planned by Yaguarete for a ‘private nature reserve’ on Totobiegosode land

3,000
Estimated hectares destroyed by Yaguarete in 2009

0
Public statements by President Lugo about the Totobiegosode