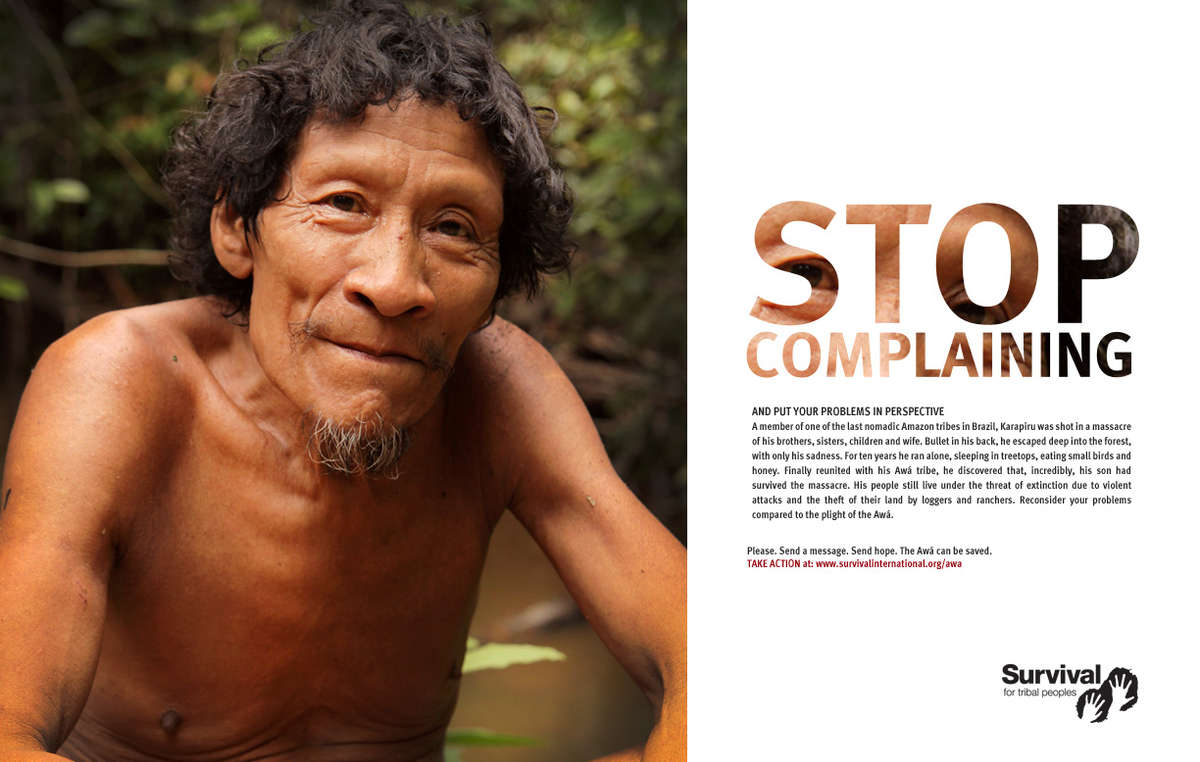 Human rights organization Survival International has launched a worldwide advertising campaign to raise awareness of the plight of the Awá tribe in Brazil, Earth’s most threatened tribe.

The advert, entitled ‘Stop Complaining, and put your problems in perspective’ was designed by Tribe Global. It tells the harrowing story of Karapiru, an Awá man who witnessed the massacre of his brothers, sisters, children and wife at the hands of gunmen. Karapiru fled to the forest, where he lived alone and on the run for ten years.

The ad reads, ‘For ten years he (Karapiru) ran alone, sleeping in treetops, eating small birds and honey. Finally reunited with his Awá tribe, he discovered that, incredibly, his son had survived the massacre. His people still live under the threat of extinction due to violent attacks and the theft of their land by loggers and ranchers. Reconsider your problems compared to the plight of the Awá. Please. Send a message. Send hope. The Awá can be saved.’

The ad supports Survival International’s urgent campaign to save the Awá. Supporters around the world are using the campaign’s awáicon to spread the message, and nearly 50,000 protest letters have been sent to the Brazilian authorities. Yet the government has still done almost nothing to stop the illegal invasion of the Awá’s land.

Ian Wright of Tribe Global, said, ‘When we set up Tribe Global we decided that it was important to give something back to the worldwide community, and we thought the fit with Survival International was perfect. Their work for threatened tribal peoples needs all the support we can give them, and our global offices are all united in helping bring the plight of the Awá tribe to the largest possible audience’.

Stephen Corry, Director of Survival International, said, ’Karapiru’s tragic story is but one of many – most go undocumented. Only the Brazilian government has the power to end these brutal attacks on its tribal citizens. How? By evicting illegal invaders from the Awá’s land before it’s too late.’

- This pro-bono campaign is created especially for Survival by Tribe Global – the world’s first boutique network of advertising and communication agencies. Today there are 21 agencies around the world including agencies from Europe, North America, Latin America, Asia and Australia. Tribe Global is a coming together of like minded people and agencies who share a common culture and way of doing business.

- Survival does not pay for advertising space, but relies on the generosity of magazines and their publishers.

- If you would like to run the advert in your publication to support Survival’s campaign for the Awá, please contact [email protected]