Uncontacted Nanti could be decimated by plans to detonate thousands of explosive charges and allow hundreds of workers to flood onto their land. © Unknown/Survival

Peru has approved the highly controversial expansion of the Camisea gas project onto the land of uncontacted Amazon tribes – despite international outrage, the resignation of three ministers, and condemnation by the United Nations and international human rights organizations.

Peru’s Ministry of Culture, tasked with protecting the country’s Indigenous population, has approved plans by oil and gas giants Pluspetrol (Argentina), Hunt Oil (US) and Repsol (Spain) to detonate thousands of explosive charges, drill exploratory wells and allow hundreds of workers to flood into the Nahua-Nanti Reserve, located just 100km from Machu Picchu.

The expansion could decimate the uncontacted tribes living in the reserve, as any contact between gas workers and the Indians is likely to result in the spread of diseases or epidemics to which the Indians lack immunity.

Pluspetrol itself recognizes the devastating impact the expansion could have. In its ‘Anthropological Contingency Plan’ the company states that any diseases transmitted by workers could cause ‘prolonged periods of illness, massive deaths, and, in the best cases, long periods of recovery.’ 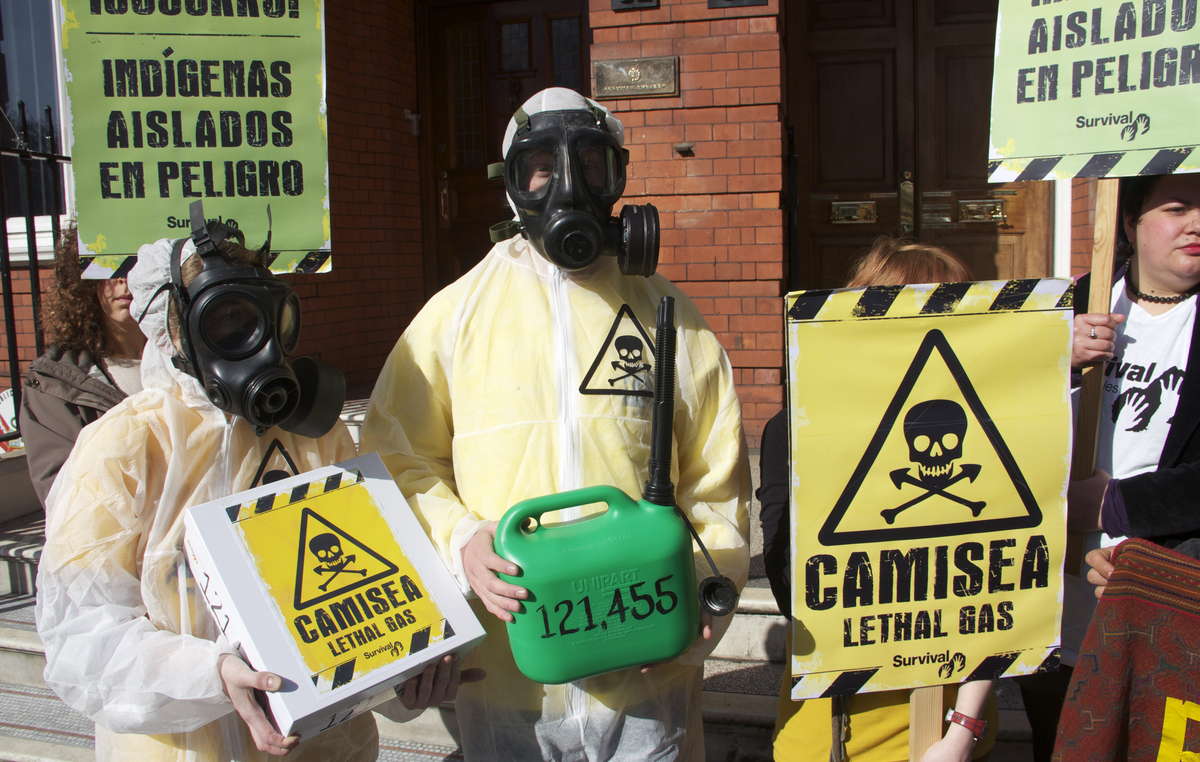 Protests were held around the world against the plans to expand the Camisea gas project in Peru’s Amazon rainforest. © Survival

When oil giant Shell first started explorations in the area, it led to the death of nearly half the Nahua tribe. One Nahua man recounted, ‘Many, many people died. People dying everywhere, like fish after a stream has been poisoned. People left to rot along stream banks, in the woods, in their houses. That terrible illness!’

The project violates Peruvian and international laws which require the consent of any projects carried out on tribal peoples’ land.

Last year, protests were held around the world to stop the expansion of Camisea, and more than 131,000 Survival supporters have sent a message to Peru’s President Humala demanding a halt to the oil and gas work on uncontacted tribes’ land. Today, Survival handed the list of the thousands of petition signatures to the Peruvian embassy in London.

As a result of the high profile campaign by tribal rights organization Survival International, local organizations AIDESEP, FENAMAD, COMARU and ORAU, and others, to stop the expansion, seismic testing has been averted from riverways and the location of one well was moved from the land of an isolated tribe.

Survival’s Director Stephen Corry said today, ‘Thirty years ago workers prospecting for the Camisea deposit penetrated deep into the territory of the Nahua people – and soon after, half the tribe were wiped out by flu and similar diseases. Has the Peruvian government really learnt nothing from history, that it is prepared to risk this happening again for the sake of a few more gas wells?’

- Read more quotes on the devastating impacts of the Camisea expansion