A message from deep inside an Indian forest flashes up on my phone: “I am good! I am in the forest now, I came to climb a tree for network!” It’s from Leela, a member of the Chenchu tribe from India, letting me know that he and his community, who have decided to isolate themselves in their forest to protect themselves from Covid-19, are all OK. 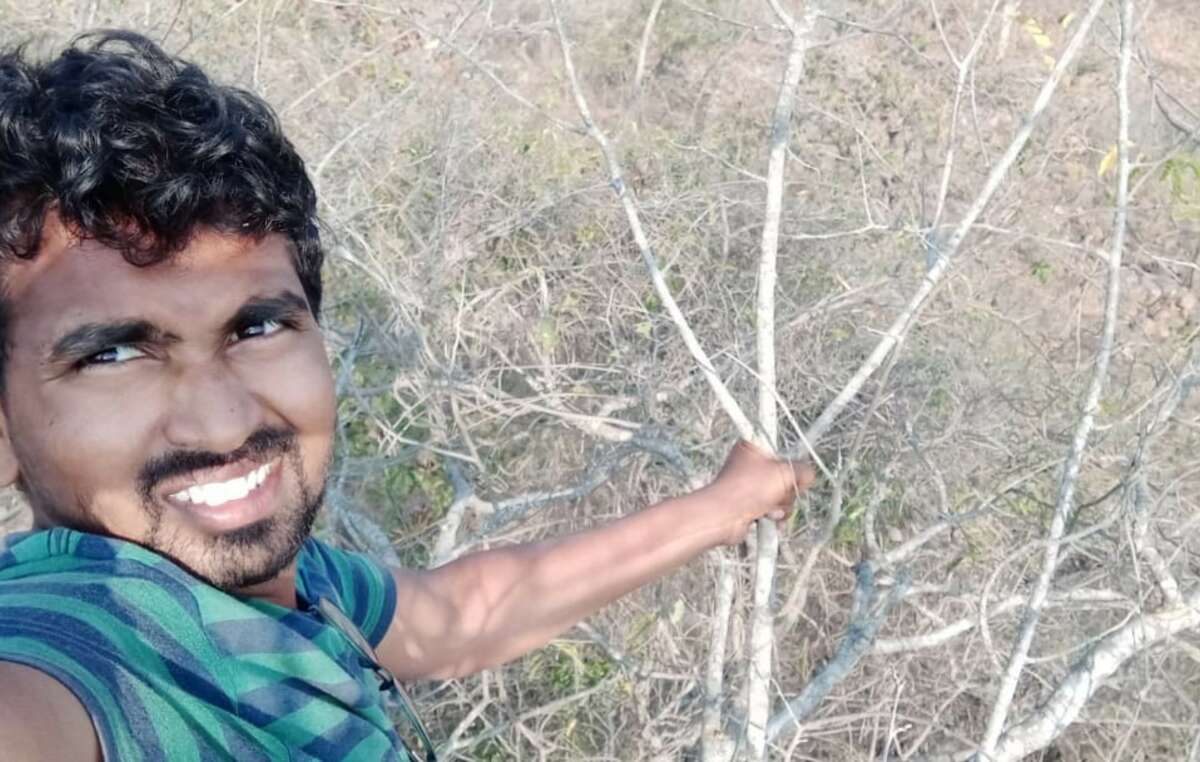 A photo that Leela sent to Sophie when he climbed up a tree to get phone signal. © Leela

I work with tribal and Indigenous peoples across Asia, campaigning for their rights to their land and against the conservation organizations, industries and governments who are stealing it from them. As the Covid-19 crisis spreads across many of their areas, I’ve been worrying about friends and contacts in remote places and how they’re coping, so it’s a huge relief when, like Leela, people are able to send word.

There is much in the news about the dangers of Covid-19 for Indigenous peoples in South America, especially uncontacted tribes in Brazil. However, not much has been written about the situation of Indigenous and tribal peoples in Asia.

Indigenous and tribal peoples are both uniquely able to isolate and defend themselves from the virus and uniquely vulnerable to it. The key difference between the two outcomes comes down, as it so often does, to land. Tribal peoples who have control over their lands, or who are still living on their lands, are able to go into lock down and live self-sufficiently. Rubi, a Meratusian Dayak from South Kalimantan in Indonesia said: “We have plenty of food provided by our forest. We can survive until next year,” and Leela, whose ancestral forest in India’s Telangana state has been made into a tiger reserve, laughed and said, “Of course!” when I asked if they had enough food to last a prolonged lock down.

However, for tribal peoples who have lost their land or been evicted, the coronavirus exposes all that they’ve lost. People like the countless Orang Rimba in Sumatra, Indonesia, whose forests have been turned into palm oil plantations; the Jenu Kuruba families from India who have been evicted from their land to make way for tiger reserves; or the Penan from Malaysia’s Borneo living in grim resettlement sites after their land was submerged to make way for dams. 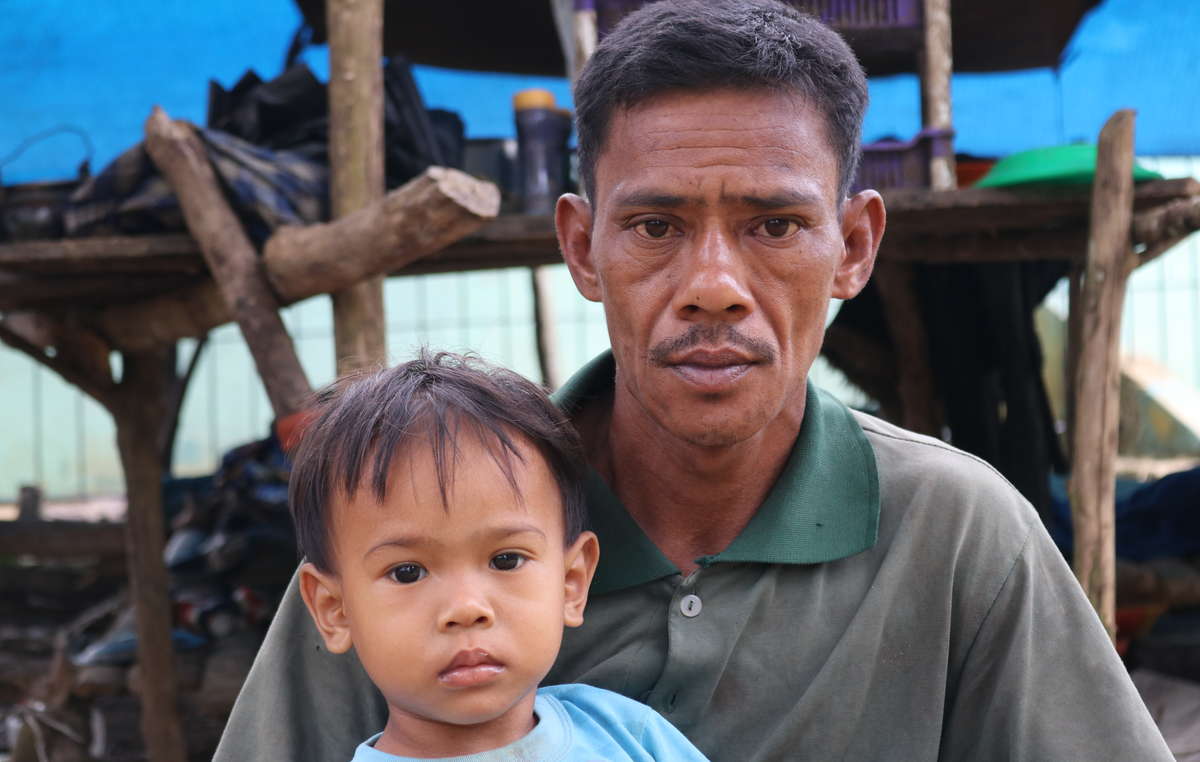 Selora with his son Rapa. Their forest has been destroyed and turned into an oil palm plantation. © Survival

Cramped into poor quality housing, deprived of the forests that they’ve protected and managed for millennia, with no land from which to gather or grow food, tribal peoples who have had their lands stolen from them are often the poorest of the poor. In contrast to their self-sufficient relatives in the forests, they are often forced to rely on daily wage jobs in mines or plantations, jobs that disappear during coronavirus lock downs.

Jenu Kuruba people evicted from Nagarhole National Park in the name of tiger conservation have told Survival how before eviction their lives in the forest were really good, but now in the resettlement village they live “miserable lives” in “awful conditions…riddled with problems and difficulties.” The contrast between the ability to survive in the forest and in grim resettlement sites is stark. 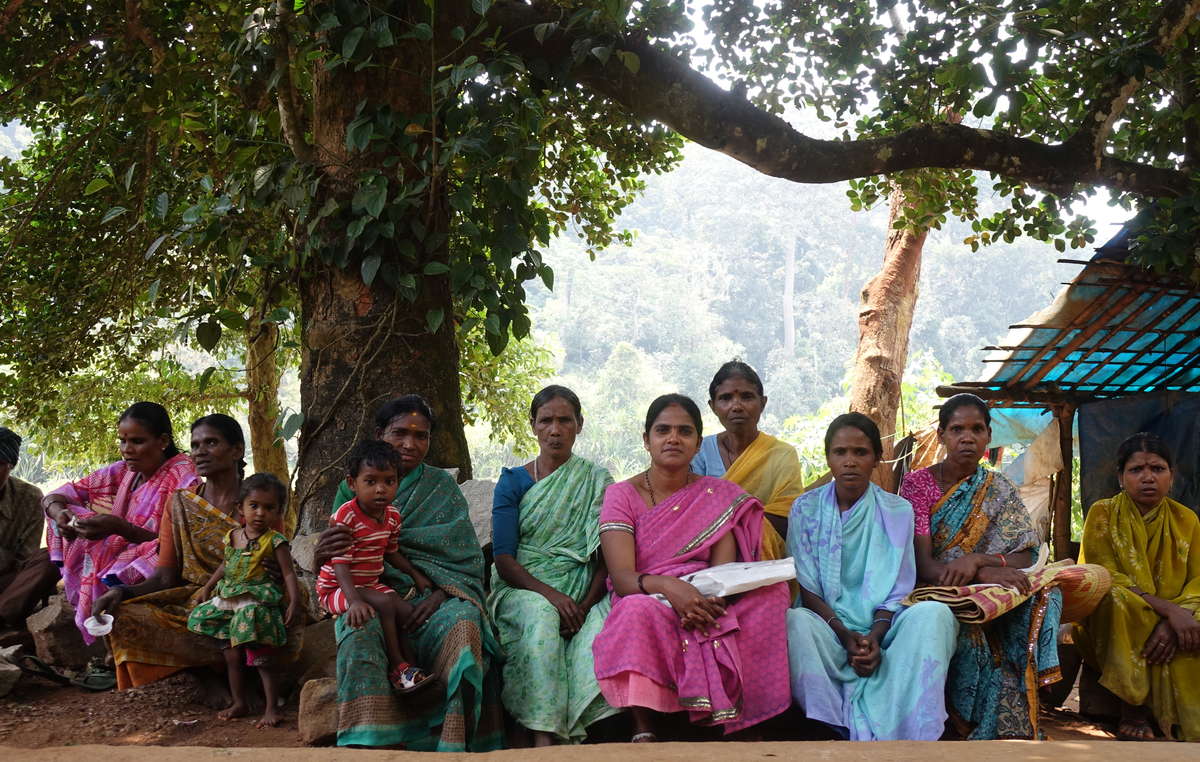 Jenu Kuruba have lived with and nurtured the unique flora and fauna of Nagarhole Tiger Reserve. “For centuries we all have been living together as one: the forest, the animals and the tribes”. © Survival

The same dichotomy of best- to worst-able to survive can be seen with uncontacted and recently contacted tribes. If their lands are protected, uncontacted tribes, such as the Sentinelese from India’s Andaman Islands are already in a state of perpetual self-isolation, defending their lands from invaders who may bring in diseases to which they have no immunity.

Conversely, recently contacted tribes have already borne the brunt of diseases, such as influenza and measles to which they had no resistance, something that, at the moment, many people can identify with. The Jarawa, of India’s Andaman Islands, who only began having friendly contact with settlers who border their territory since the late 1990s, have already faced two measles epidemics, in which well over a third of the population were infected. Complications of the disease left many facing respiratory problems, including pneumonia, possibly making them even more vulnerable if they contract Covid-19.

Although efforts have been made to restrict contact between the Jarawa and outsiders — by reducing all but essential travel on the road that cuts through their territory, and by encouraging the Jarawa to remain deep in the forest — their future is uncertain. Lockdown may encourage more outsiders to venture illegally into their forests in search of food, and welfare workers could easily introduce the disease to the tribe.

Elsewhere in Asia and the Pacific there are a number of numerically small and isolated tribes at great risk. The Indigenous Peoples Alliance of the Archipelago (AMAN) lists seven Indigenous peoples in Indonesia that it believes are threatened with extinction, even without Covid-19. In West Papua and in Indonesia’s North Maluku and Gorontalo there are communities who have little or no contact with mainstream society who will be unaware of the global health crisis. Unlike the Sentinelese, who live on their own island, these peoples have neighbours and land invaders who may bring in the disease. 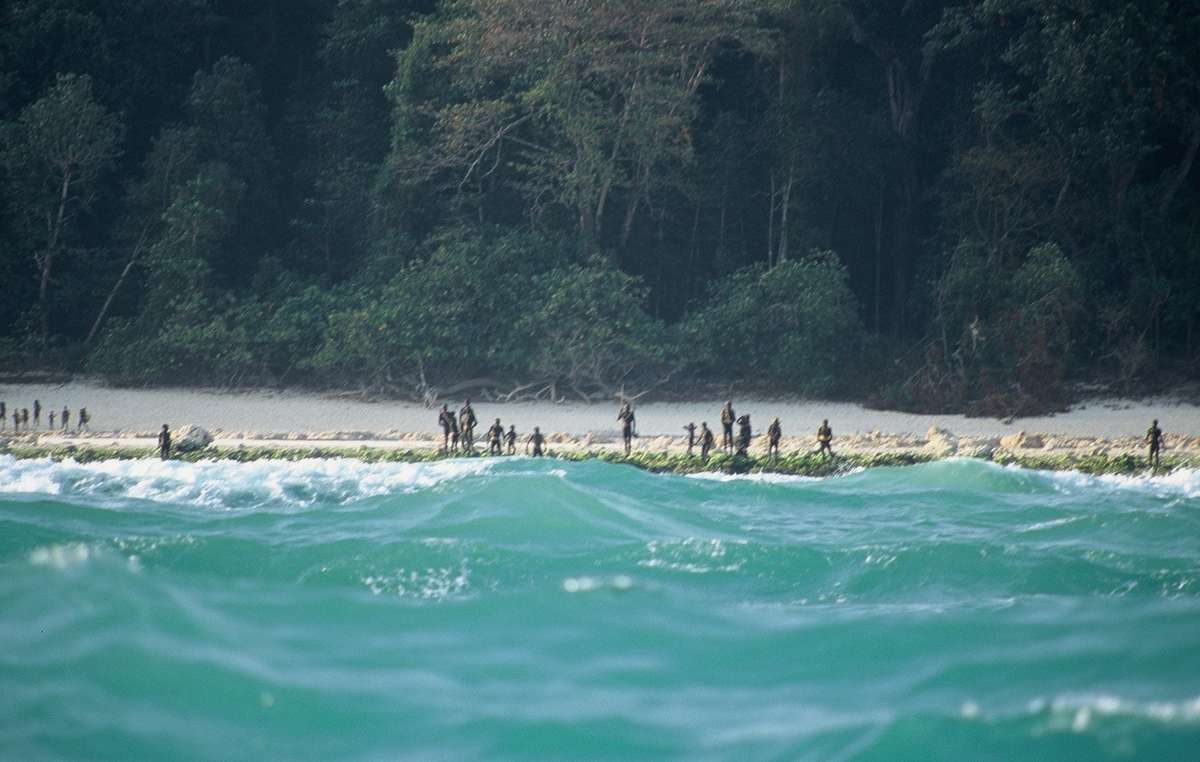 Although tribal communities all have their own means of treating familiar diseases, they are often particularly poorly served by public health facilities needed to treat diseases introduced by outsiders, including Covid-19. Under-funded, under-staffed and difficult to access from remote areas, tribal peoples across Asia are rarely able to access good quality and affordable healthcare, making them particularly vulnerable in the face of a global pandemic. Loss of land and access to the resources they’ve traditionally relied upon also leads to poor nutrition and under-nourishment, making tribal communities more at risk from coronavirus.

For example, in West Papua, where land theft and political repression have been rampant for decades, Papuans have an HIV infection rate 15 times the Indonesian national average and struggle to get the necessary treatment. This underlying health condition will make many vulnerable to complications from Covid-19, yet there are reported to be only 7 lung specialists and around 60 ventilators in West Papua for a population of just over 4 million people.

Across Asia, tribal communities are instituting their own lockdowns, stopping anyone from going in or out of their villages, keeping themselves safe, often before governments have issued such orders. For some this is a new development, but one that their peerless knowledge of their forests and environments ably equips them for.

There is much we can learn from tribal people too. The Orang Rimba, who live in the Bukit Duabelas National Park in Sumatra, are using their traditional quarantining method of besesandingon to help protect themselves. Under these rules, now being applied again, the Orang Rimba, or anyone else who has come from outside, can’t mix directly with those in the forest until they’ve served a period of quarantine. They have to isolate themselves from the group they want to visit (constructing temporary houses at a safe distance) until enough time has elapsed for it to be safe. 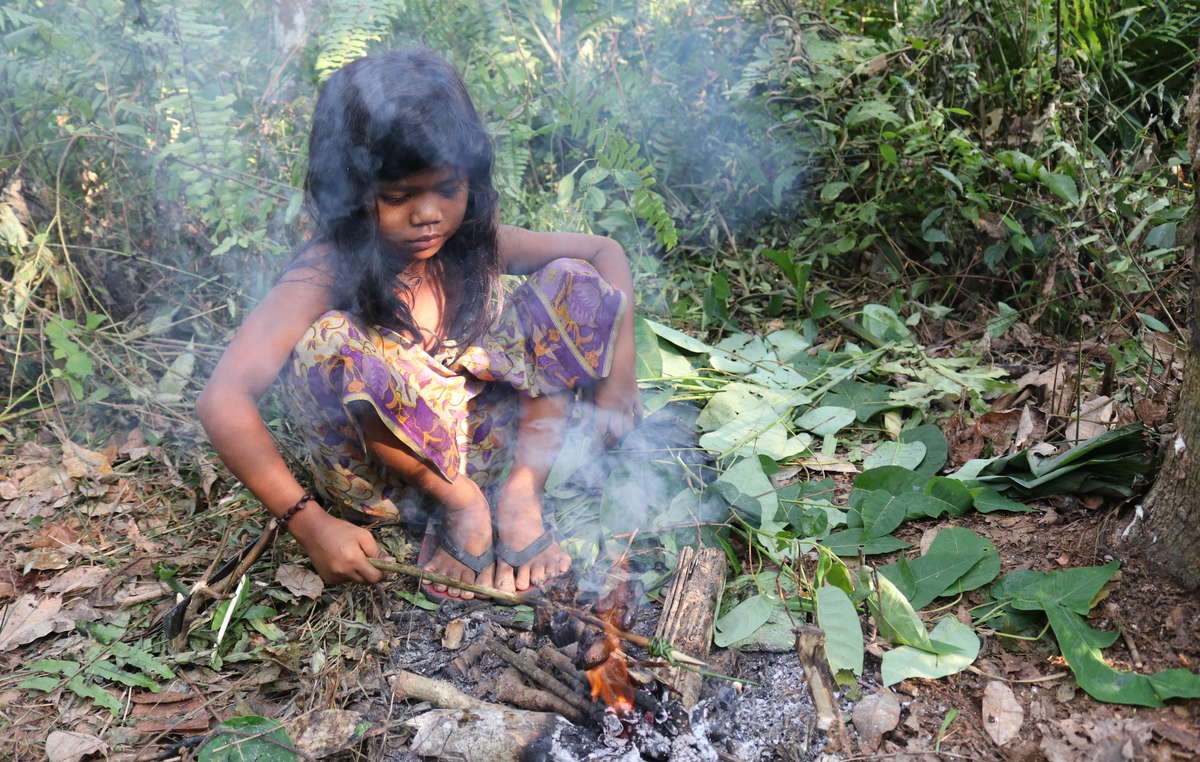 Tribal people are experts in their environments, with incredible knowledge of the plants and wildlife they live among. Those still living on their land and able to access their resources are the best equipped peoples on the planet to self-isolate and be able to live self-sufficient and sustainable lives. For those of us struggling to find pasta or toilet paper this is a level of independence and freedom that we can only dream of. But those whose lands have been stolen to make way for plantations or industry, or who’ve been evicted in the name of conservation and thrown into overcrowded resettlement camps, are some of the most vulnerable people in the world in the face of Covid-19.

The huge difference between Indigenous peoples who have their land and those who have had it taken from them in this global pandemic should be a wake-up call for the future. When the world re-emerges from the other side of this virus, many people will be looking for new ways of doing things — not simply a return to business as usual. A recognition of Indigenous land rights; a respect for Indigenous knowledge, and placing Indigenous and tribal peoples, the best guardians of the natural world, at the forefront of the environmental movement would be a very good place to start.

For 50 years, Survival International has been fighting alongside tribal peoples to defend their lives and lands.