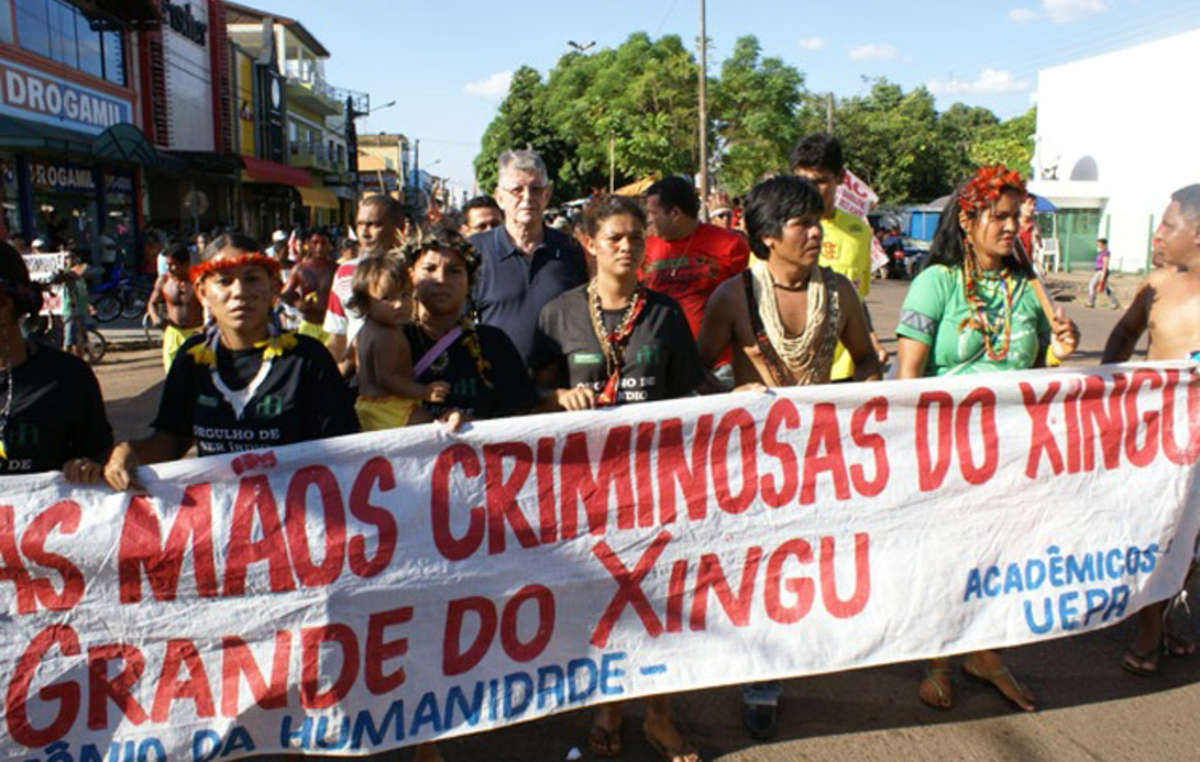 Bishop Erwin Kräutler marches against the Belo Monte dam, Brazil. Catholic Bishop Erwin Kräutler won the 2010 Right Livelihood Award (known as the ‘Alternative Nobel Prize’) for his work defending the rights of Brazilian tribes, and particularly in defending the rights of tribes living along the Xingu region in the Brazilian Amazon, who are now threatened by the construction of the Belo Monte mega-dam. © Prelazia do Xingu

Three Amazon Indians have begun a journey through Europe to protest against dams which threaten to destroy the lands and lives of thousands of tribal people.

Ruth Buendia Mestoquiari, an Ashaninka Indian from Peru, Sheyla Juruna, a Juruna Indian from the Xingu region and Almir Surui of the Surui tribe in Brazil, are calling for three controversial dam projects in the Amazon to be halted.

Download biographies of the delegates and information about the dams (in English, 60KB, PDF).

Several European companies are involved in building the dams, including GDF Suez, Alstom of France, Voith of Germany and Andritz of Austria.

The delegation will be in Paris on Friday, February 25 and Saturday 26. They will hold a conference in the Latin America Institute (Maison de l’Amérique latine) on Friday at 7pm, after meeting Senator Marie-Christine Blandin. They will then organize a protest at midday in Human Rights Square in Paris on Saturday.

The Indigenous delegation will then travel to London, where on March 2 they will protest, with Survival supporters, outside the office of the Brazilian state development bank BNDES, which is providing much of the funding for the dams.

The delegation will also meet with British parliamentarians at the Houses of Parliament in London.

The Pakitzapango dam project in Peru threatens to flood a vast area of the Ene River Valley, home to thousands of Ashaninka Indians who will lose their lands and livelihoods.

The Madeira dams in Brazil could attract large scale immigration to and deforestation of the area, where several tribes, including groups of uncontacted Indians, live and depend on the forest for their survival. Any contact between the uncontacted Indians and outsiders could prove fatal for the Indians.

The Belo Monte mega-dam planned for Brazil’s Xingu river would be the world’s third largest dam. If constructed it will devastate a huge area of forest and reduce fish stocks on which Indigenous peoples depend. There are reports of uncontacted Indians near the dam site.