This page was last updated on August 30, 2022 and may contain language which is now outdated.

The Akuntsu are a tiny Amazonian tribe of just three individuals. They are the last known survivors of their people and live in Rondônia state, western Brazil.

In a few decades the Akuntsu will become extinct, and our planet will have lost a unique people, language and culture.

Today the Akuntsu  occupy a small patch of forest. It has been  legally recognised and demarcated by the Brazilian government, but is surrounded by huge cattle ranches and soya  plantations. These have replaced the once extensive rainforests of Rondônia which were home to many tribes.

They live in one community, in two small malocas (communal houses) made of straw. They are keen hunters—wild pig,  agoutis and tapir are all prized—and cultivate small gardens where  they grow manioc and corn. They also gather forest fruits and sometimes  catch small fish in the creeks.

The Akuntsu make wooden flutes which  are used in dances and rituals. They wear arm bands and anklets made of  palm fibre. Shell necklaces have been replaced by necklaces of bright  plastic which the Akuntsu cut from the  pesticide containers left as litter by the ranchers.  They paint their bodies with urucum (annatto dye) for ceremonies.

In a small patch of rainforest in Brazil, the last six survivors of a genocide dance.

Konibu was the elder of the two Akuntsu men and a shaman. He used to make snuff from tobacco leaves and inhale this to communicate with the spirit world, and blow it over his family and visitors to ward off bad spirits and cleanse the body.

In 1995, field workers  employed by FUNAI, the government’s Indian affairs department, made contact with a group of five Kanoê Indians, a group who live in the same area as the Akuntsu. The Kanoê told FUNAI that they had seen the gardens and houses of another isolated group nearby whom they  called the Akuntsu.

A few months  later in 1995, contact was finally made with the Akuntsu. Alarmingly, they numbered just seven people. One of Konibu’s daughters died, when a tree fell on the house during a storm in 2000, and Ururu, the oldest Akuntsu, died in October 2009. They now number just three.

From the 1970s FUNAI was aware of the existence of uncontacted Indians in Rondônia. The construction of a major highway, known as the BR-364, resulted in waves of cattle ranchers, loggers, land speculators and colonists occupying the state.

As more and more forest was destroyed, the uncontacted groups were forced to flee the bulldozers and seek refuge in the dwindling pockets of forest. We will never know just how many died from disease and violence.

In the 1980s, despite the ranchers claiming there were no uncontacted groups left, a group of determined FUNAI field workers continued to search for isolated groups which they knew were under serious threat.

Signs of the Indians’ presence were uncovered. In 1984 a tractor belonging to loggers was hit with arrows. Abandoned communal houses and gardens were found demonstrating that the Indians had fled in a hurry.

Rumours in the Corumbiara region told of the massacre of uncontacted Indians at the hands of gunmen employed by cattle ranchers.

In 1985, FUNAI found evidence of the massacre – an entire Indian maloca had been bulldozed and covered with earth by ranchers in an attempt to hide the attack.

Pieces of broken pottery and arrows were unearthed which Konibu later confirmed were Akuntsu. He named many relatives who were killed by the gunmen.

Pupak, the other Akuntsu man, was shot in the back as he fled the gunmen and still bears the scars. The trauma the group has been through is evident in their fear of the ranch hands who still occupy part of their land, and of the noise of chainsaws operating nearby.

Although their land has been legally recognised and FUNAI maintains a permanent presence in the area, the Akuntsu are surrounded by  hostile ranchers. Some still have buildings, employees and herds of cattle in the Akuntsu territory. FUNAI is trying to expel the ranchers, and the case is now in the courts.

Having  witnessed the genocide of their people, and suffered extreme violence  from gunmen employed by the ranchers, the Akuntsu are fearful and mistrustful  of most outsiders, particularly the ranch hands.

Linguists are now working with the Akuntsu to record and understand their language. It is hoped that one day the Akuntsu will be able to tell their full story to the world.

As a very isolated people, the Akuntsu are extremely  susceptible to diseases transmitted by outsiders. Unless they  decide to marry in to other indigenous groups, which looks unlikely, this tiny tribe will  disappear from the face of the earth forever, and the genocide of the Akuntsu people will be complete.

Act now to help the Akuntsu

The Akuntsu continue to live in fear of the threats that surround them. Please act to have their lands secured. 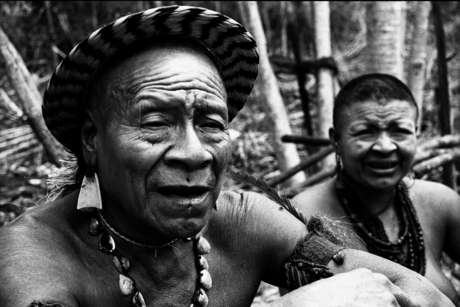 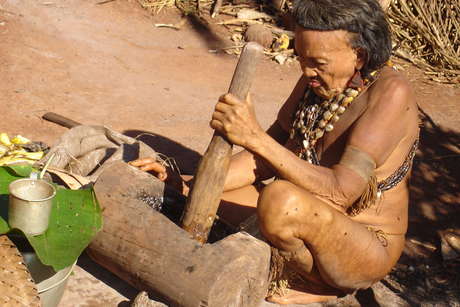 Amazon tribe down to five as oldest member dies

The Akuntsu tribe in the Brazilian Amazon has lost its oldest member, Ururu, leaving the tribe with only five surviving members.