The proposed railway through the Amazon rainforest is likely to devastate the lands of uncontacted tribes through industrial exploitation, illegal logging and mining. © G. Miranda/FUNAI/Survival, 2008

A controversial mega-project to build a transcontinental railway from the Atlantic to the Pacific has caused outrage among Indigenous people and Survival International, the global movement for tribal peoples’ rights.

The railway, which is backed by the Chinese government, would cross through many Indigenous territories and areas of high biodiversity across the Amazon rainforest in Peru and Brazil. If realized, it would wreak havoc on Indigenous peoples’ lands and lives by opening up the area to industrial exploitation, illegal mining and logging, and encourage colonization.

Ninawá Kaxinawá, an Indigenous leader whose community lives near the proposed railway line, told Survival, “This railway is evil and it threatens our people. For us Indians and our uncontacted relatives this project represents a deadly danger which would put an end to our forest and our lives!”

Uncontacted tribes, the most vulnerable societies on the planet, would face devastation from invasions into their lands. Whole populations could be wiped out by violence from outsiders and by diseases like flu and measles to which they have no resistance.

Similar projects set a chilling precedent. In the 1980s, the 900 km Carajás railway line in Brazil’s north-eastern Amazon opened up the land of many tribes such as the isolated Awá, Earth’s most threatened tribe, to illegal loggers, cattle ranchers and settlers. Countless families were massacred and others succumbed to diseases brought in by outsiders, and rampant logging resulted in over 30% deforestation in the Awá’s central territory.

Decades later, illegal loggers still threaten the lives of uncontacted Awá. In December 2014, a group of three Awá were forced out of their forest home by loggers. Two of them are now critically ill. 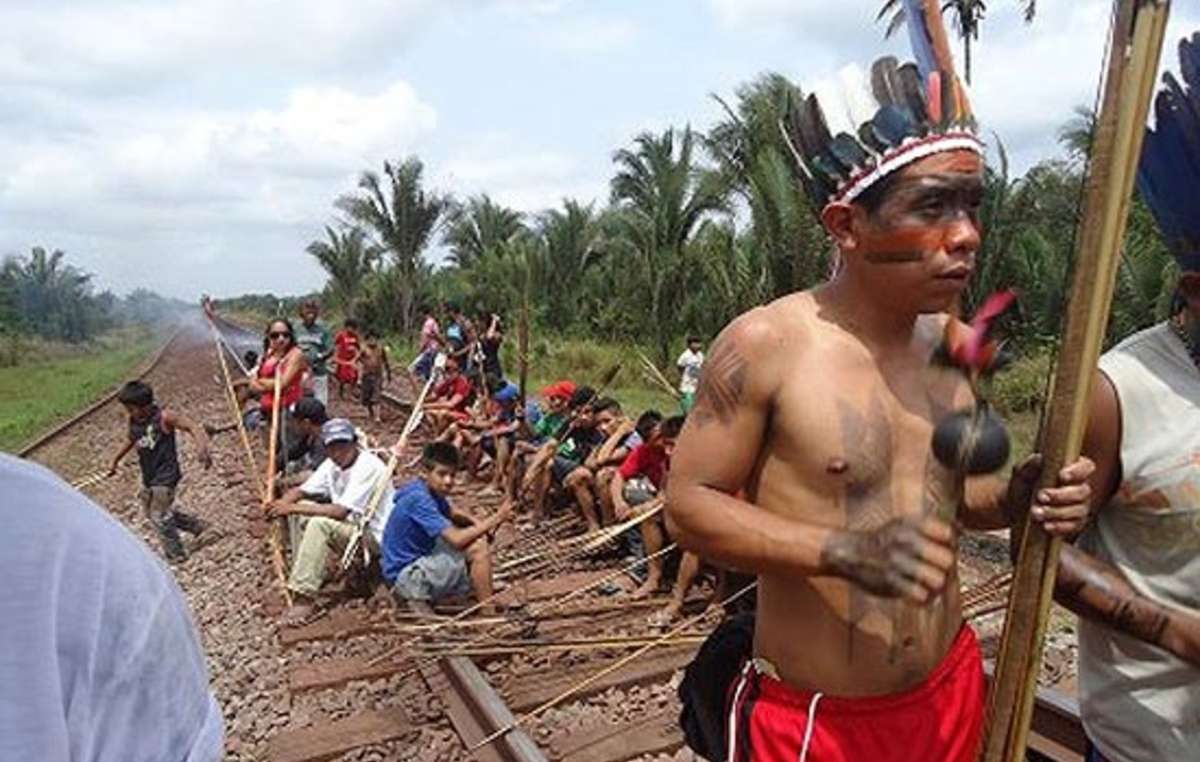 The massive Carajás railway line bordering the land of the Awá tribe brought illegal settlers into their land. © CIMI/Survival

The trans-Amazon railway will run over thousands of kilometers and is likely to cause even more devastation of the Amazon rainforest and its peoples. While studies show that tribal peoples are the best conservationists, their lands are facing an onslaught of development projects.

Survival International is calling on the Brazilian and Peruvian governments to uphold national and international laws, which require that Indigenous peoples must be properly consulted and give their consent before projects that will affect them can go ahead. Because consultation with uncontacted tribes is impossible, their land must be protected to avoid catastrophe.

Stephen Corry, Director of Survival, said, “Projects like this amount to nothing more than the theft of tribal lands and – as always – they’re carried out in the name of ‘progress’ and ‘development.’ For centuries, the Indians of the Americas have been sacrificed at the altar of profit. Many don’t survive the onslaught against their lives and lands. Make no mistake – for uncontacted tribes this railroad is genocidal.”