The protesters – holding blank placards and banners and spelling out the word ‘invisible’ – were drawing attention to the Indian government’s decision to permit British company Vedanta Resources to mine land sacred to the Dongria Kondh tribe. The government has treated the Dongria as invisible, ignoring their views.

The Dongria are vehemenently opposed to the mine on their sacred mountain and today submitted an appeal to the government in Delhi. In London, the protestors echoed their pleas to be heard by the government.

Photos of the protest are available below.

The Dongria Kondh have won the backing of British actress and campaigner Joanna Lumley. In narrating Survival’s film ‘Mine: story of a sacred mountain’, Lumley said, ‘It’s only because the Dongria have known their lands so intimately and for so long that this extraordinary forest survives. The Dongria know that [the mine] will ruin their homes, pollute their lands and destroy their lives. We cannot let their fate be decided in a corporate boardroom.’ 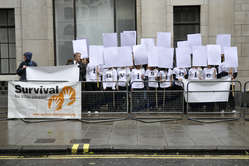 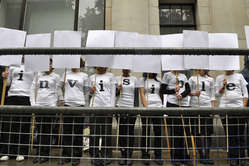 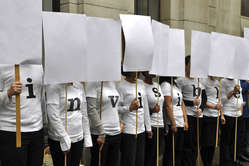