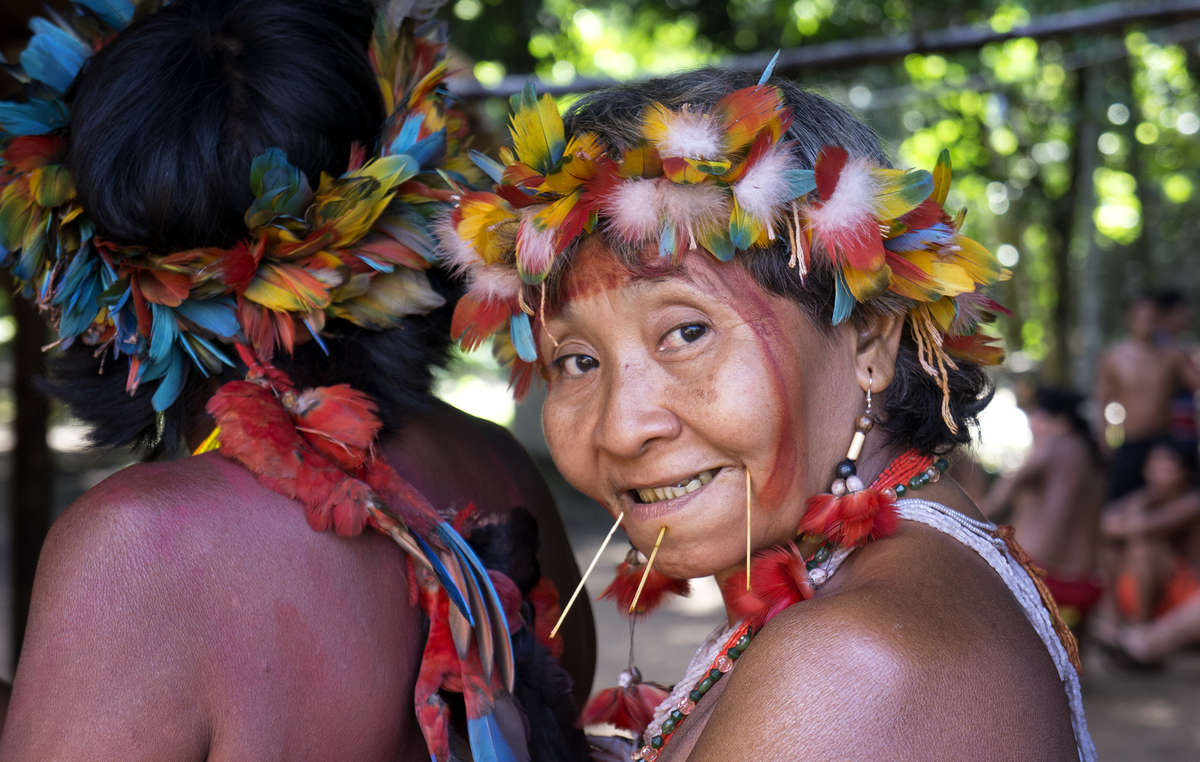 Brazil’s Yanomami Park is among the largest areas of protected rainforest in the world; it’s also the best reply to critics who say that efforts to protect tribal peoples are futile.

The park saved the Yanomami and was secured with modest resources: a handful of people with conviction and public support more than made up for their lack of big bucks. Similar victories can, indeed must, be grasped elsewhere with equally modest ingredients.

The Yanomami, who straddle the Brazil/Venezuela border, are a relatively typical Amazon people except in one respect – their numerical size. Their many ‘sub-groups’ go by a variety of names (‘Yanomami’ is simply the most widely recognized by outsiders) and constitute about 19,000 individuals in Brazil and 13,000 in Venezuela. This is some fifty times bigger than most Amazon Indian tribes, and the Yanomami are amongst the largest of all South American peoples who live comparatively isolated from mainstream society.

The story of their ‘park’ starts in 1968 when an anthropologist couple, Alcida Ramos and Kenneth I. Taylor, began developing a succession of proposals for the government to protect Yanomami land. These proposals were supported by Survival International’s Robin Hanbury-Tenison, in Brazil in 1971, and by more Survival founders, John Hemming and Francis Huxley, in an Aborigines Protection Society mission the following year.

Ten years later, photographer Claudia Andujar, together with missionary Carlo Zacquini, and others, including anthropologist Bruce Albert, formed the Brazilian Committee for the Creation of the Yanomami Park (CCPY), whilst Survival International began linking with organizations in the USA and Europe to ensure the campaign grew as international as possible.

The tipping point came in 1989. That year, when Survival won the Right Livelihood Award, we asked the Yanomami to stand with us as representatives at the award ceremonies. The idea was not without risk. No Yanomami spokesperson had ever left the country, though there was one who had been articulating Indian demands internally for years: Davi Kopenawa, who was 33, had learned Portuguese from missionaries and was well-travelled in Brazil. But how would he react to London’s December and freezing Stockholm with its six hours of low, pale sun, and nights which fell at lunchtime? He would have hours of press, TV and radio interviews. With no experience outside Brazil, would he see the point? Indeed, how certain were we it would have an impact? We certainly knew it would not be easy.

The idea was unthinkable without Claudia Andujar. An in-depth photographer of Yanomami life, she knew Davi well and had lived in Yanomami communities over many years. She could easily translate into English, and was no stranger to problems and risk: having escaped Nazi-occupied Hungary as a teenager (her father was killed in Dachau), her anti-Nazi background was a driving force behind her involvement in the Indigenous support movement.

On landing in Heathrow, I drove them first to the west of England for a few days acclimatization. Davi seemed relaxed, though his thoughts were racing. As he wiped his finger along the frosted top of the car, he announced that he now understood why white people were that color: it was the cold and lack of sun. This was the first of a stream of observations as he enfolded each new experience into his shaman’s perception. They have continued for years, through visits which have since taken in Stonehenge and Avebury (particularly important), Iron Age longbarrows (chilling), the Giotto frescoes in Padua (uninteresting), and the spectacular roof of Milan’s Gothic cathedral (attractive, as opposed to the city in general). Like most Amazon Indians, Davi generally finds our cities savage and hostile.

There is no doubt that the excitement resulting from Davi’s first international trip propelled the campaign onto a different level. Within a few months, the Brazilian government opened the Yanomami area to once-banned support organizations, and CCPY teams formally took over part of its official medical program. As a new Brazilian president embarked on a world tour, he was repeatedly met by Survival’s orchestrated letter deliveries and petitions. His environment minister declared that the country was ‘being crucified’ on the international stage. Demonstrations and vigils grew. Prince Charles abandoned protocol, much to the British government’s consternation, and caught the mood in a 1990 Kew Gardens speech, when he called the Yanomami situation a ‘pattern of collective genocide’.

Two years later, the government finally capitulated and designated the Yanomami territory almost entirely as an Indian ‘park’. It was an astonishing victory which few of those involved had ever dared to believe in.

Of course, the story will continue as long as there are Yanomami. During the 1980s, illegal gold miners began to invade their land, bringing in deadly cerebral malaria. One in every five Yanomami died in just seven years, some violently. The year after the park’s creation, miners attacked an Indian community at Haximu, killing men, women and children. Fortunately, the Brazilian network, and Survival’s international one, responded loudly to each new atrocity. In any previous era, the killers would have gone on to kill again. Now, the government successfully convicted them of genocide, and evicted most of the miners.
The Yanomami will always need to remain vigilant and alert to protect their territory, and will always need effective outside voices to help. But, contrary to most predictions made in the 1970s and 80s, the Indians are still there today. Davi believes that without Survival International there would be no Yanomami left.

As I said, the idea that tribal peoples have no future is one of the principal obstacles they face. It’s high time the doomsayers looked at evidence from the great victories for human rights of the past, such as the end of the slave trade and apartheid: the future for tribal peoples also depends on public opinion insisting that the fundamental human right – to life, itself – must no longer be sacrificed on the altar of money.

This fight is not about ‘cultural preservation’ or ‘modernity’. The Yanomami will continue to change as time passes, as all peoples do. The fight is about whether or not we really believe in the rule of law and the right to life, or whether they are just lip-service to ease our acceptance of the widespread injustices and cruel divisions which increasingly characterize the twenty-first century.

Those who endlessly extol the benefits of ‘our civilization’ brush off the fact that good healthcare, education, jobs, and justice etc, are really only accessible by particular, often minority, sectors of the population, even in the richest countries. There is far more misery, violence, and early death in Brazilian slums and Mexican drug wars, and amongst dispossessed US Indians and Australian Aboriginals, than there is in Indigenous Amazonia.

The view that tribal peoples cannot be saved may be wrong, but it’s certainly self-fulfilling. They won’t be saved unless enough people believe it’s possible, and are willing to lend their voices to the networks and campaigns which exist to help them. It’s a genocide that can be stopped.

_Stephen Corry has worked with Survival International since 1972. His introductory book ‘Tribal peoples for tomorrow’s world’ was published last year.