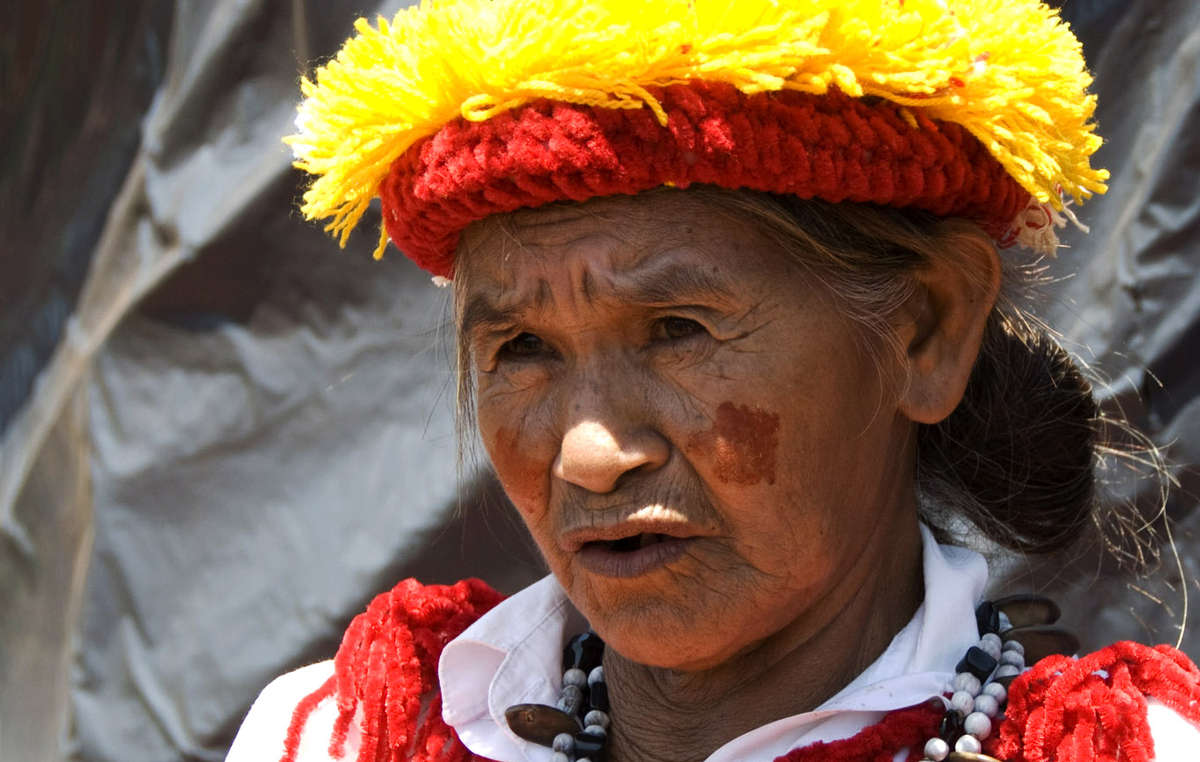 Nearly all Guarani, such as this woman’s community, have seen their land stolen and opened up for ranching or sugar cane production. © Fiona Watson/Survival

Breaking news: It is reported that a new ruling has been issued, obliging the rancher to allow the authorities to deliver food and medical supplies to the Indians.

A beleaguered Indian community in Brazil which has been cut off from the outside world by the rancher who has taken over their lands is still imprisoned, despite winning a recent court ruling.

The Guarani community of Ypo’i returned to their ancestral land in 2009, which had been taken over by a rancher called Firmino Escobar. Mr Escobar then blocked the road leading to the Indians’ community, and gunmen surrounded their houses, cutting off their access to water, food and healthcare.

In November, a court ruled that the Guarani could remain on a small piece of their land while the authorities map out their territory. Mr Escobar, however, continues to block access to the Indians.

A federal prosecutor has since ordered Mr Escobar to open the road leading to the Indians’ community, and has warned that if he does not do so, he will have to pay a fine of 100,000 Reais (US $ 58,000).

An undercover Survival campaigner who went to Mr Escobar’s ranch and asked to be let in to meet the Guarani was told, ‘This is my land – there are no Indians here’, and ‘You can’t come in. I won’t allow you in.’

Describing the community’s feelings at their court victory, Anastácio Peralta, a Guarani spokesman, said, ‘This decision is a huge spiritual relief for the Guarani. However, this is just the first step; there are many struggles ahead’.

A Guarani man from Ypo’i said, ‘On the one hand we are happy we can stay on our land. On the other hand, we are sad and worried that we do not have enough food and are not receiving health assistance. I feel a pain in my heart’.

The ruling follows interventions by the Brazilian government’s Indians Affairs Department, Survival, Brazilian NGO CIMI, and other organizations, emphasizing the desperate situation of the Guarani

Following a previous attempt to take back their land, two Guarani men from Ypo’i disappeared and are thought to have been assassinated. The body of one of the men was found dead and badly bruised in a river in the area.

The Guarani of Ypo’i decided to carry out these reoccupations following the government’s severe delay in mapping out their ancestral territory, which it is required to do by an agreement signed with the Guarani in 2007.

Survival’s Director, Stephen Corry, said today, ‘The Judge’s ruling to allow the Indians to live on this patch of their forest is undoubtedly a step in the right direction for the Guarani of Ypo’í. In order for the Indians not to suffer similar violence and threats again, it must be followed by the speedy recognition and protection of all the Guarani’s land.’

Earlier this year, Survival sent a report to the United Nations, highlighting the violence, malnutrition and suicide the Guarani face as a result of their lack of land.