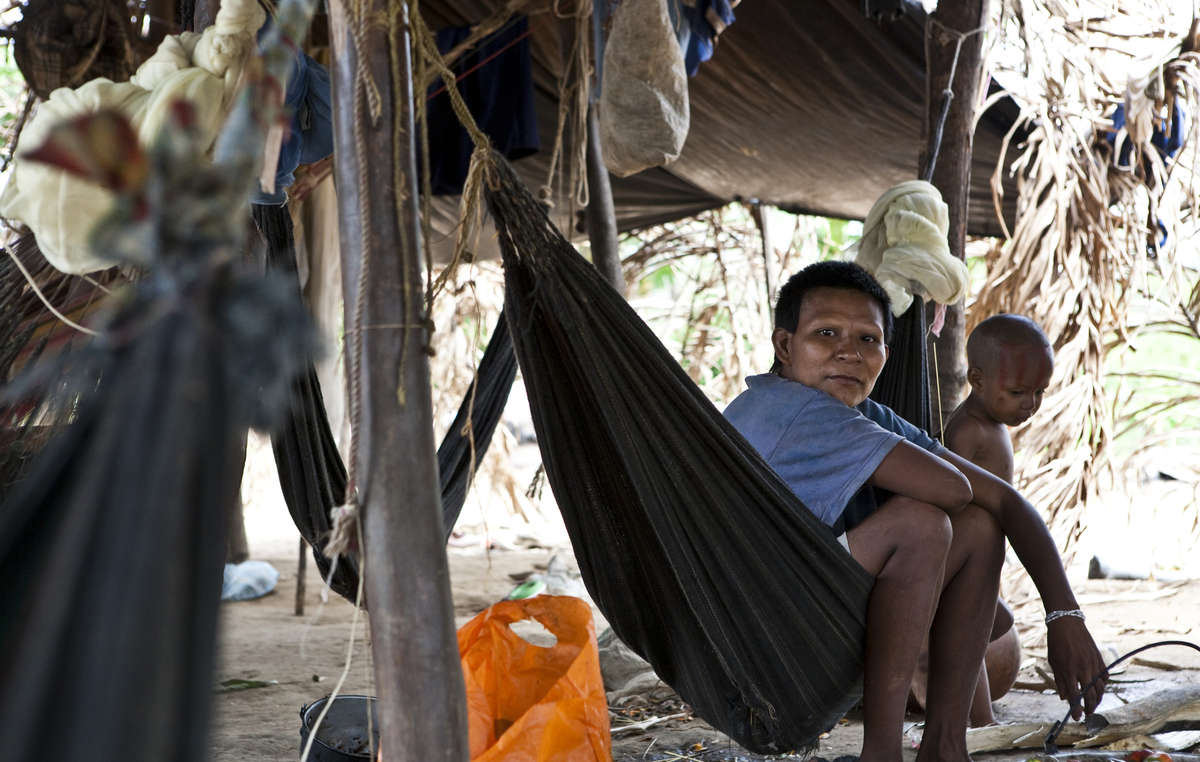 Many Nukak have been forced to flee their forest homes, and now live in refugee camps outside the forest. © Arnau Blanch/Survival

This page was last updated on December 21, 2010 and may contain language which is now outdated.

A leader of the Nukak tribe from the Colombian Amazon has made a desperate appeal for his people’s survival before the country’s top human rights committee.

’We want to return to our forest,’ said Joaquín Nuká, ‘from where the FARC guerrillas forced us out – why, we don’t know.’

The Nukak are a nomadic hunter-gatherer people from the Guaviare region of south-east Colombia. They have been forced to flee from their lands by the FARC, a left-wing rebel army that claims the Nukak pose a security risk to their illegal operations in the area.

Since first emerging from the forest in 1988, more than half of the Nukak have been wiped out, mostly by common diseases caused by contact with outsiders. The Indians are now struggling to adapt to a new sedentary way of life, living on the outskirts of towns and relying on government handouts to survive.

‘[In the forest] we lived amongst all the food of the jungle,’ Joaquín told national radio station, Caracol. ‘The food that they give us here in San José is good, it is white people’s food, but it badly affects the children, we miss our forest foods.’

Despite government efforts and an ongoing ‘War on Drugs’ that has received considerable funding from the United States, coca cultivation for cocaine continues to ravage the region.

One of the most controversial methods employed to eradicate coca involves spraying deadly pesticides on the crops from planes. This has only served to push the farmers into ever-remote regions in the jungle, provoking violence against the Indigenous communities who live there.

Vice-president of the committee, Senator Alexander López, said, ‘The forced displacement … especially of Indigenous communities such as the Jiw and Nukak, poses a severe threat to their survival as peoples… The Indians should return to their territories immediately and their way of life should be protected with dignity.’

The Nukak are one of more than 30 Indigenous peoples who face extinction in Colombia according to national Indigenous organization, ONIC, and the UN High Commissioner for Refugees. Survival is campaigning for the Nukak’s right to return to their reserve, on condition that it is made secure and that they receive proper health care.

Survival’s Director, Stephen Corry, said today, ‘This desperately depressing predicament has gone on for far too long. The Nukak and other Indigenous peoples have been left to bear the brunt of the government’s failed anti-drugs policies.’