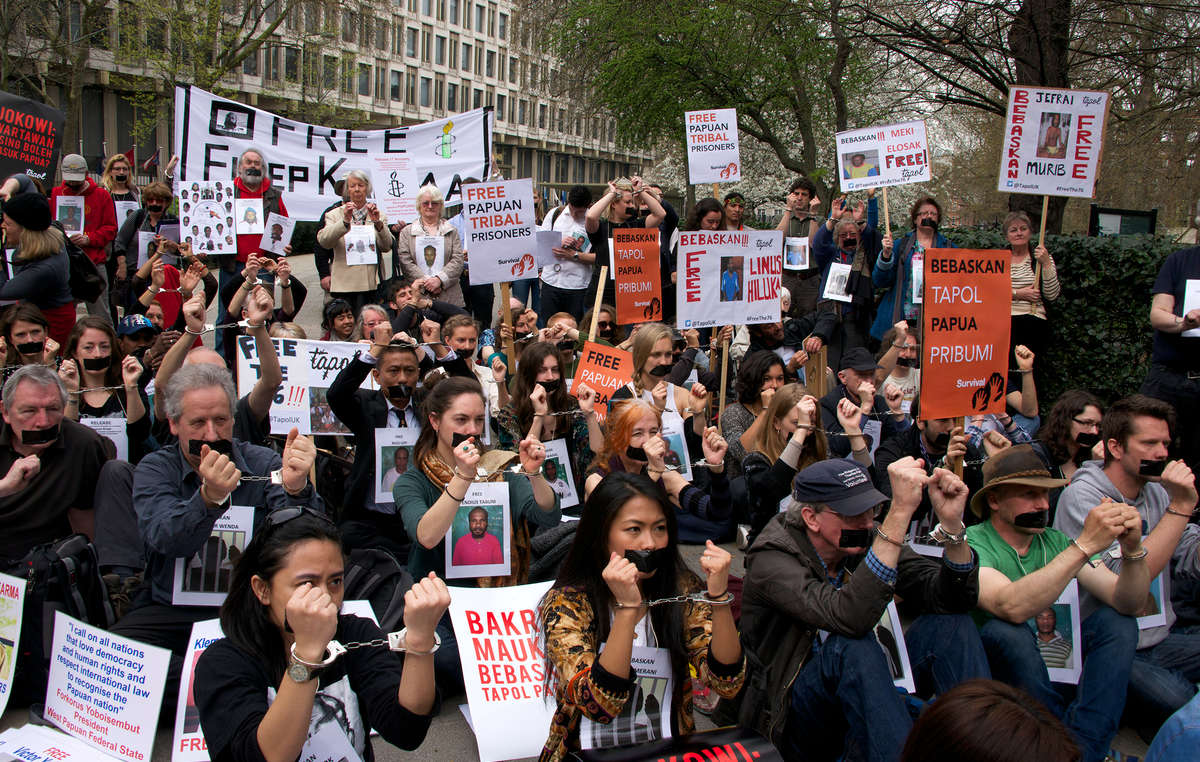 UPDATE April 3, 2014: The two Papuan students who were arrested yesterday have now been released. Both were severely beaten and remain in pain; one required stitches for his injuries.

Around 100 protestors demonstrated today outside the Indonesian embassy in London to call for the unconditional and immediate release of all Papuan political prisoners.

76 of the protestors were handcuffed and had their mouths taped shut to represent the 76 political prisoners currently being held in Indonesian prisons.

The protest was organized by Tapol, Survival International, Amnesty International and the Free West Papua Campaign.

According to data from Papuans Behind Bars, the number of political arrests more than doubled in 2013 compared to the previous year, and reports of torture and ill treatment of political detainees have increased. West Papua’s tribal people continue to be arrested for peaceful activities and are often charged with treason or incitement, which can carry lengthy prison sentences.

A demo today in West Papua about political prisoners was dispersed by the police who fired warning shots. Two students have been arrested.

Wiki Meaga was arrested in November 2010 while he was on the way to the funeral of a relative who had become ill after being tortured by the police. Meaga and eight other Papuans were accused of raising the banned Morning Star flag before they left their village in the Papuan highlands. It is believed that they were tortured after their arrest. Six of the men were found guilty of ‘treason’ and sentenced to eight years imprisonment. The fate of the other three men is unknown. 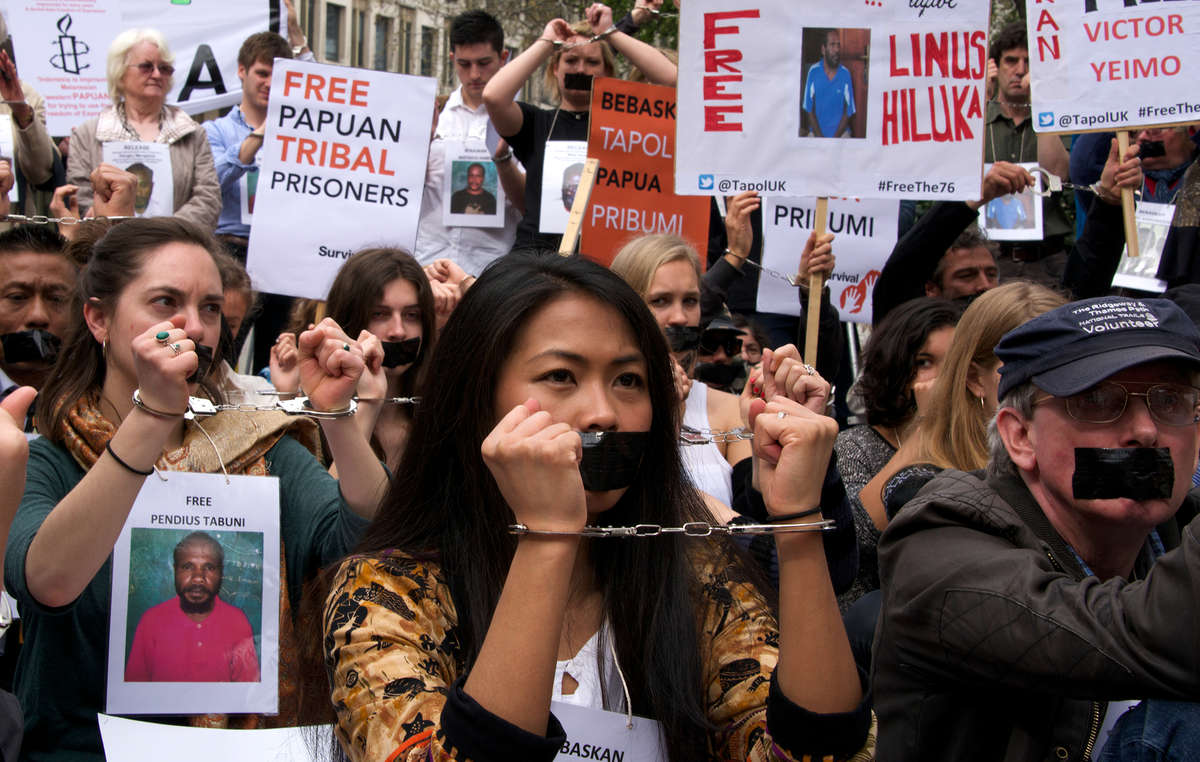 The protestors outside the Indonesian embassy were handcuffed and had their mouths taped shut. © Helen Saunders/Survival

Dominikus Surabut, a Papuan activist, writer and documentary film maker who was arrested in 2011 sent a message to the protestors in London, saying ‘I can’t be with you in person today because I am in jail, but my soul and my spirit are with you. United and strong we will overcome.’

Nixiwaka Yawanawá, a Yawanawá Indian from the Brazilian Amazon, who joined Survival International to speak out for Indigenous rights also participated in the protest. He said, ‘As an Amazon Indian I can understand the Papuans’ fight for freedom and justice. The Papuan tribes have suffered racism and violence at the hands of the Indonesian government for over 50 years; this inhumane action has to stop immediately.’ 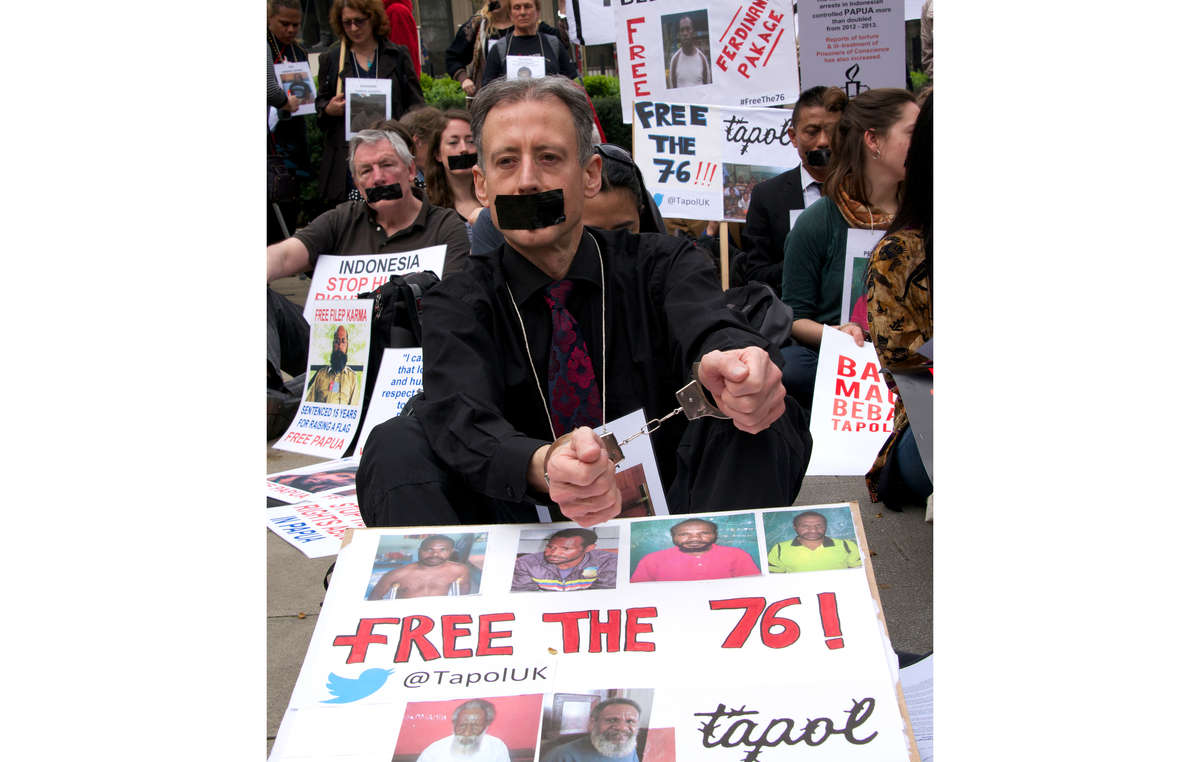 Indonesia has occupied Papua (the western half of the island of New Guinea) since 1963, and more than 100,000 Papuans are believed to have been killed since then.

Survival’s Director Stephen Corry said today, ‘This is an excellent example of why the current vogue amongst some American ‘popular science’ writers for claiming that the ‘peaceful’ state pacifies ‘violent’ tribes is nonsense. Indonesia’s occupation of West Papua has only been secured through the killing and torture of tens of thousands of tribespeople, who object to their new colonizers. It is one of the world’s longest-standing, and under-reported, gross violations of human rights.’

Protest outside the Indonesian embassy in London to call for the release of all Papuan political prisoners. © Helen Saunders/Survival

Protestors outside the Indonesian embassy were handcuffed and had their mouths taped shut. © Helen Saunders/Survival 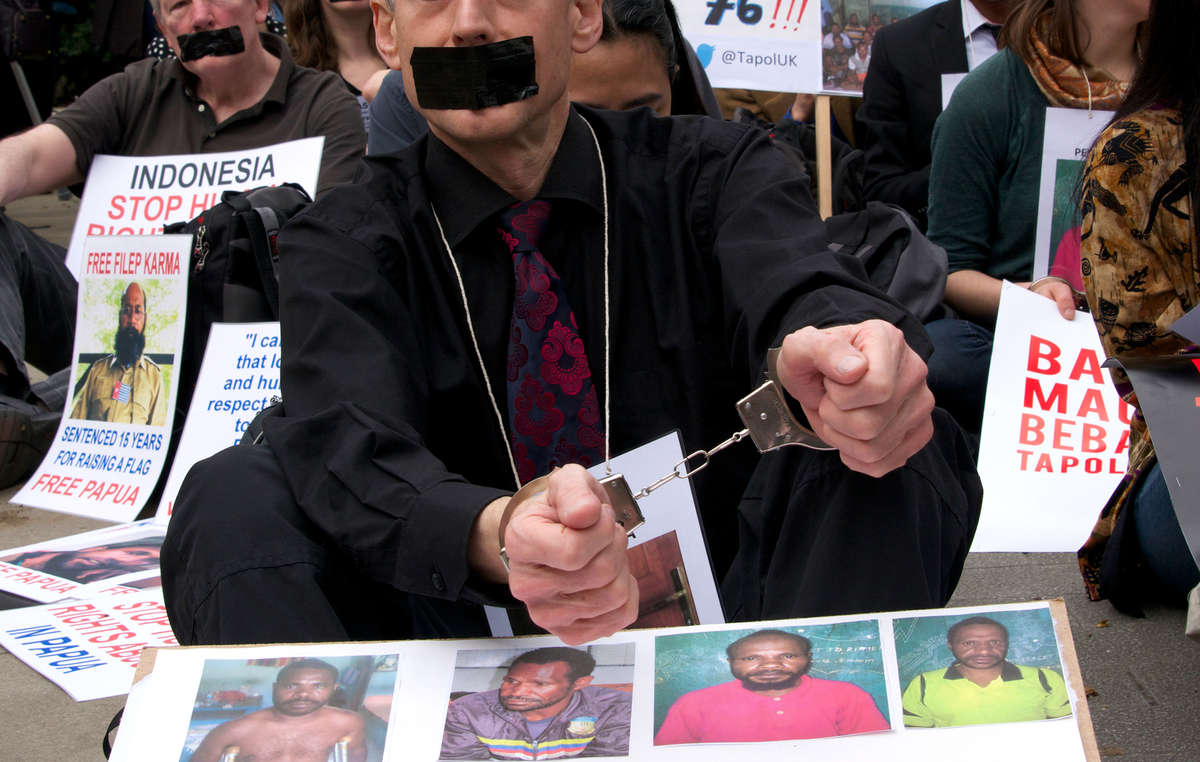