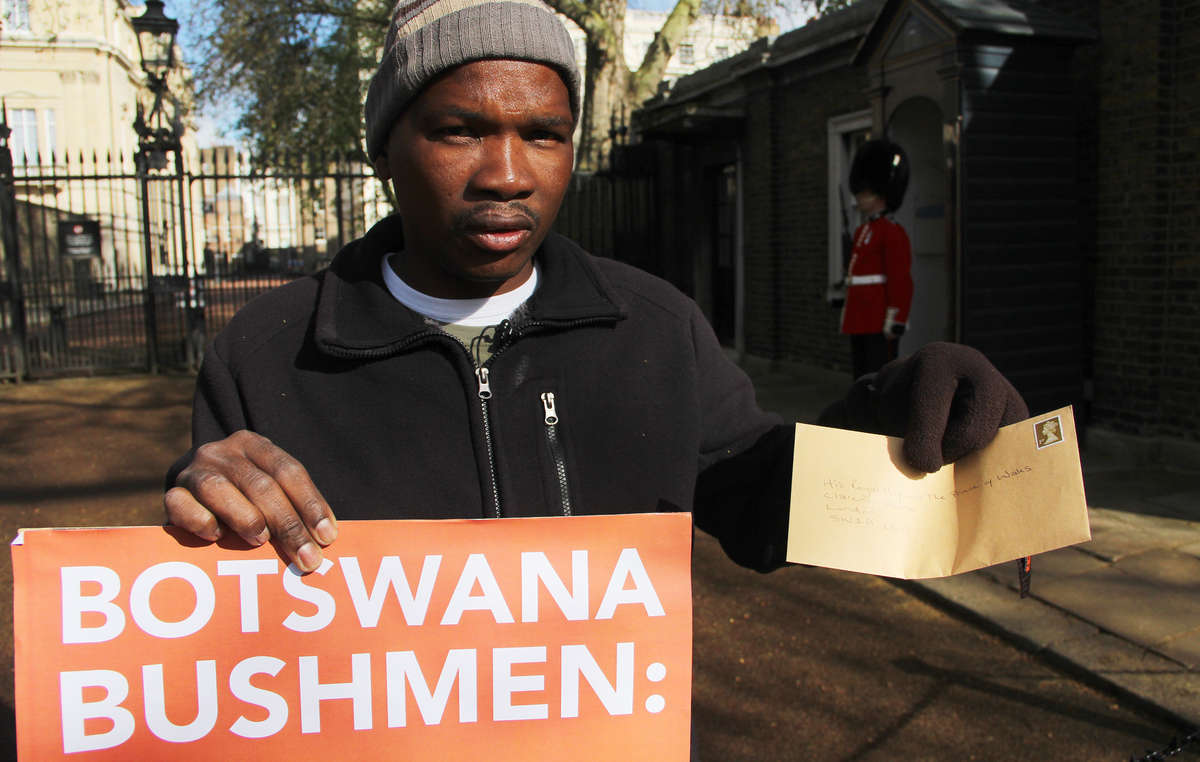 Jumanda Gakelebone, a Bushman from Botswana, sent a letter from the Bushman organization First People of the Kalahari to Prince Charles today, telling him that the Bushmen are not poachers, they hunt to survive. © Survival International

A Bushman from the Central Kalahari travelled 5,000 miles from his home in Botswana today to tell the Prince of Wales, ‘We’re not poachers – we hunt to survive.’

In February Botswana’s President Khama was an honoured guest at a global anti-poaching conference in London, alongside Prince Charles and Prince William. The initiative resulted in the launch of Prince William’s United for Wildlife, drawing together seven big conservation organizations, including US-based Conservation International (CI). President Khama is a CI board member.

But President Khama has banned all hunting nationwide, even for Bushmen who hunt to feed their families, under the pretext of clamping down on poaching. However, it has emerged that trophy hunters who pay up to $8,000 to hunt giraffes and zebras are still being allowed to hunt.

Jumanda Gakelebone, 40, arrived at Prince Charles’s residence this morning with a letter appealing to the Prince to help stop Botswana’s violent regime against the country’s Indigenous Bushmen. 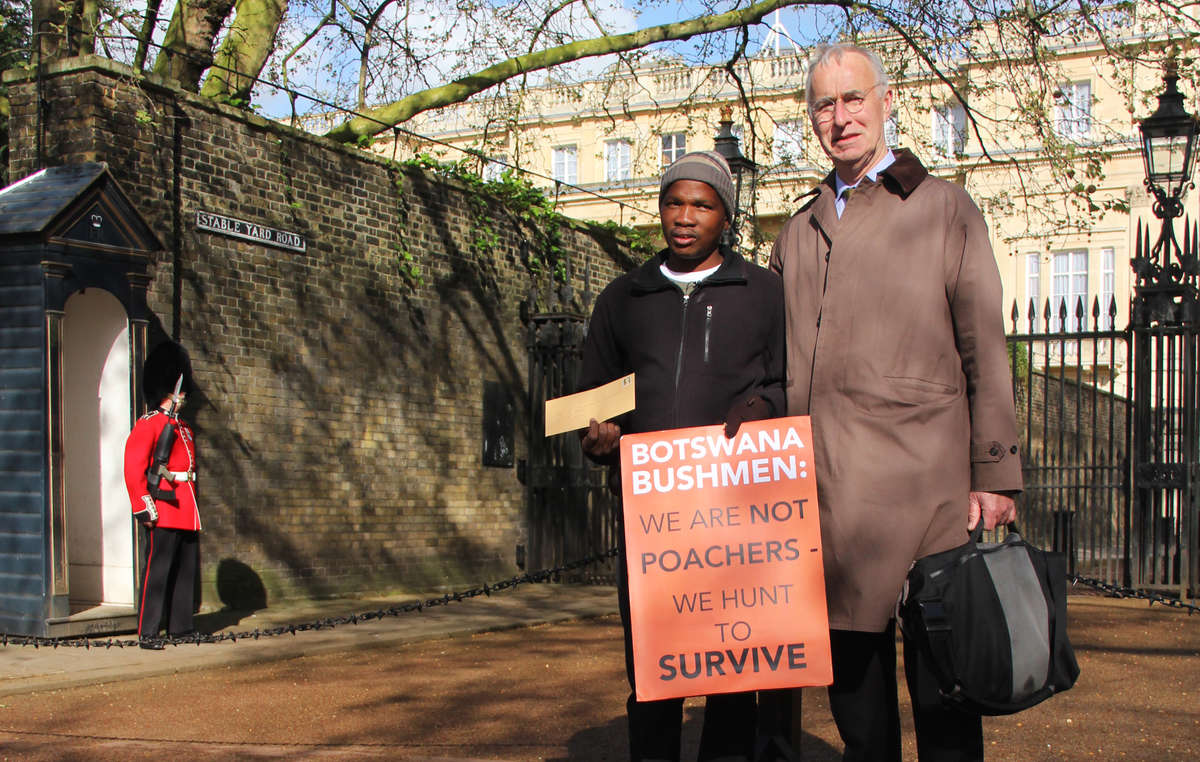 Gakelebone had to travel 5,000 miles to meet the Bushmen’s lawyer Gordon Bennett, who has been banned from Botswana. © Survival International

British barrister Gordon Bennett joined Gakelebone at Clarence House, in his first meeting with his Bushman clients since being banned from Botswana in 2013. Bennett was barred after he and the Bushmen won three court cases against the Botswana government’s persecution of the tribe.

Prince Charles first met with the Kalahari Bushmen during a trip to Botswana with his friend and mentor Sir Laurens van der Post in 1987. Sir Laurens was Prince William’s godfather.

He later wrote, ‘What I discovered was the profound and intuitive ties that bind the Bushmen to their land; their awareness of the workings of the natural world and of the delicate balance between life, physical surroundings and inner spirituality that they had maintained for so long in the harshest of environments… The Bushman is an innocent victim of what, far too glibly, too many of us would call ‘progress’… We all lose if the Bushman disappears.’ (*)

The Bushmen’s letter to Prince Charles states, ‘We have survived alongside the animals of the Central Kalahari Game Reserve since the beginning of time. We know how to look after them and we hunt them for our survival, not for entertainment like many tourists from your country do. We know that you walked with Mr Laurens van der Post and Bushmen a long time ago. You know who we are. We are begging you to talk with President Khama, and ask him to stop persecuting us the Bushmen. Let us live and hunt on our ancestral land in the Central Kalahari Game Reserve like our fathers and their fathers before them. We want our children to live off the fat of this land, in peace’.

- Download the Bushmen’s letter to His Royal Highness The Prince of Wales (PDF, 700 KB)

Gakelebone sent a letter from the Bushman organization First People of the Kalahari to Prince Charles today. © Survival International

Gakelebone had to travel 5,000 miles to meet the Bushmen’s lawyer Gordon Bennett, who has been banned from Botswana. © Survival International