Mr Bennett with Bushmen clients after their historic 2006 legal victory. Botswana’s government is now preventing him from entering the country. © Survival International

In an unprecedented move branded ‘vindictive and repressive’, Botswana’s government has prevented British attorney Gordon Bennett from entering Botswana, where he was due to represent Kalahari Bushmen at an important High Court hearing about the tribe’s access to their ancestral land.

Mr Bennett was put on a ‘visa list’ after he represented Bushmen clients at a successful hearing in June 2013 to prevent the eviction of the Bushman community of Ranyane. It was the third time Mr Bennett had won a victory for Bushmen clients: in the first, in 2006, the Bushmen won the right to return to their ancestral land; in the second, in 2011, they won the right to drill their own water boreholes after the government attempted to stop them doing so.

British citizens do not normally need a visa to enter Botswana, but six days after the Ranyane victory Mr Bennett was put on a ‘visa list’. No-one on this list appears ever to have actually been granted a visa. Mr Bennett applied for a visa, but has faced a series of delaying tactics by the authorities in Gaborone, apparently in an attempt to ensure that they do not have to consider his application until after the case has been heard. By then the application will have become academic.

Mr Bennett said today, ‘The right to a fair trial normally includes the right to be represented by counsel of your choice. Not in Botswana, apparently – or at least not if you sue the Government. Most of us would struggle to understand why one party to a legal action should ever be allowed to deprive the other of the counsel he has chosen, but the Government sees no problem. It does not even think it necessary to explain itself. Not a good day for the rule of law in Botswana.’

The Bushmen are returning to court for the third time on Monday, July 29 2013, over the Botswana government’s refusal to allow all Bushmen evicted in 2002 free access to their ancestral land in the Central Kalahari Game Reserve (CKGR). 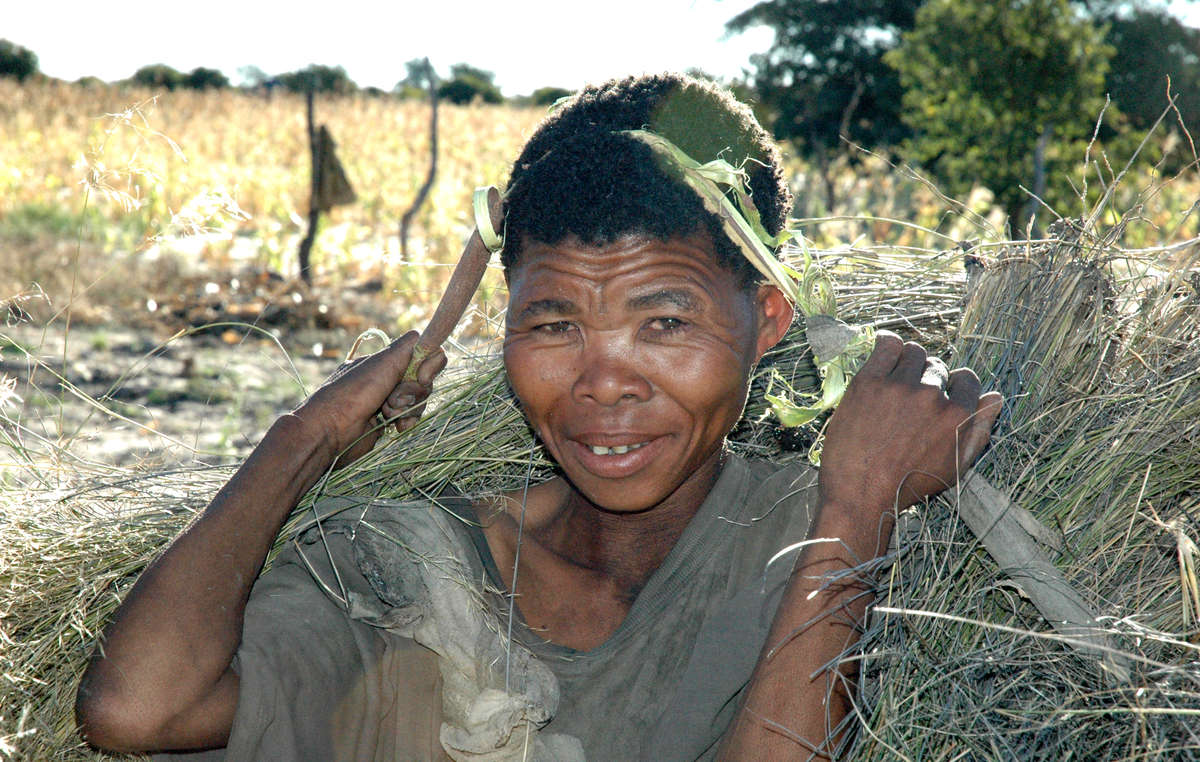 The Bushmen are returning to court again in their struggle to live in peace on their land. © Survival International

Most Bushmen are currently required to apply for permits to enter the CKGR – in blatant violation of a 2006 High Court order – and are facing ceaseless harassment and intimidation by the government.

Bushman Jumanda Gakelebone told Survival, ‘It has never been our will to go to court, but the repression, evictions, harassment, and torture carried out by the Botswana government have forced us to talk to them in court.’

In a landmark ruling in 2006, at which Mr Bennett was the lead counsel, Botswana’s High Court confirmed the Bushmen’s right to enter the CKGR without a permit. The historic case was the first to establish the principle of native land title in Africa.

But the government now claims that only the 189 people formally listed as applicants in that case, and their children up to the age of 18, are allowed free passage into the reserve – and that everyone else must apply for a one-month access permit. However, at the start of the case in 2002 the government had acknowledged that the ruling would apply to around 700 Bushmen, including children.

The Bushmen live in constant fear of overstaying their permits, amidst a spate of arrests and violence towards the tribe by paramilitary police and wildlife scouts.

Survival’s Director Stephen Corry said, ‘This is yet another calculated move by President Khama to thwart the Bushmen’s access to justice. It’s ironic that Botswana is still thought to be ‘transparent’ and ‘democratic’ when its government has spent years trying to destroy its original peoples. Now, after their successes in court, Bushmen are not even allowed their lawyer. This is a vindictive and repressive step.’

- Images and background to the 2006 court case are available here