But the natural wealth of their land is attracting damaging “development” projects.

The Sierra Nevada de Santa Marta is a unique pyramid-shaped mountain on the northern tip of the Andes in northern Colombia. On its slopes live four separate but related peoples: the Arhuaco (or Ika), Wiwa, Kogi, and Kankuamo. Together they number more than 30,000.

The mountain’s peak is over 5,000m high. Rising from the shores of the Caribbean, the lower plains are clad in tropical forest, turning to open savannah and cloud forest higher up.

To the Indians, the Sierra Nevada is the heart of the world. It is surrounded by an invisible ‘black-line’ that encompasses the sacred sites of their ancestors and demarcates their territory.

The Sierra Indians call themselves ‘the older brothers’, and believe that they have a mystical wisdom and understanding which surpasses that of others. They refer to outsiders as ‘the younger brothers.’ 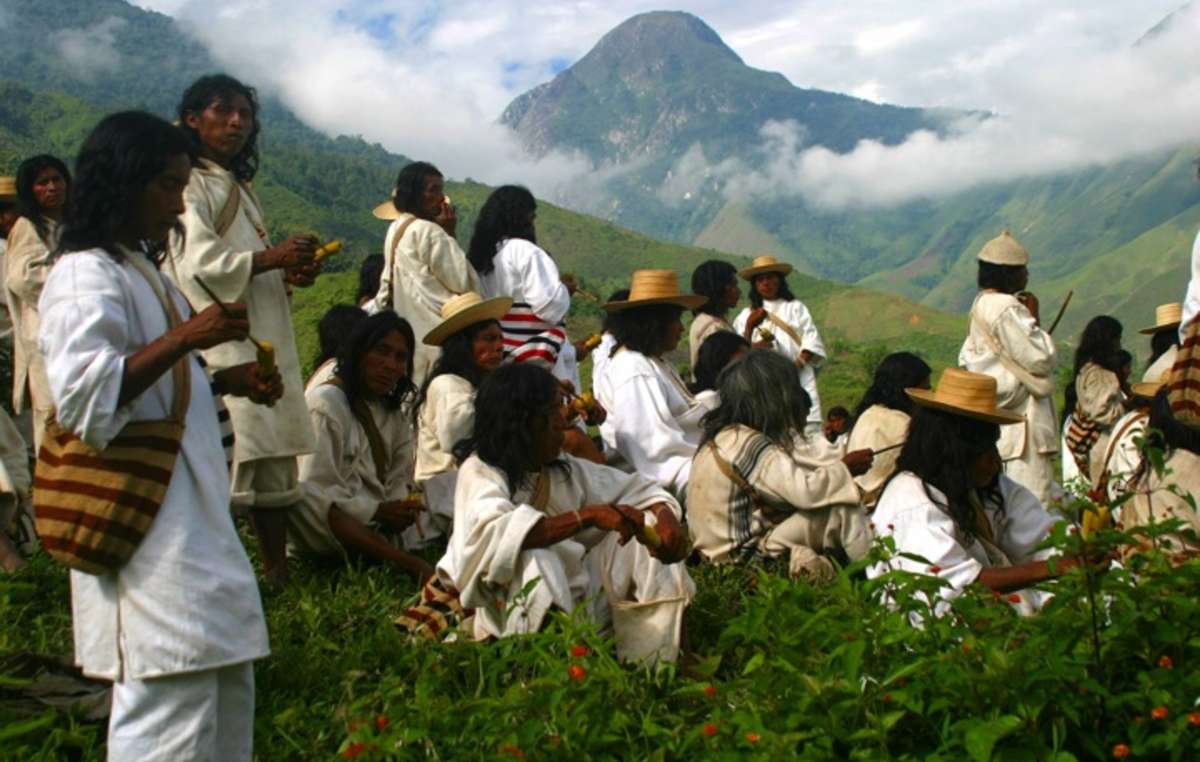 The older brothers believe it is their responsibility to maintain the balance of the universe. When there are hurricanes, droughts, or famines around the world it is said that they are the cause of human failure to keep the world in harmony.

Balance is achieved by making offerings to the sacred sites to give back to the earth what is taken out of it. 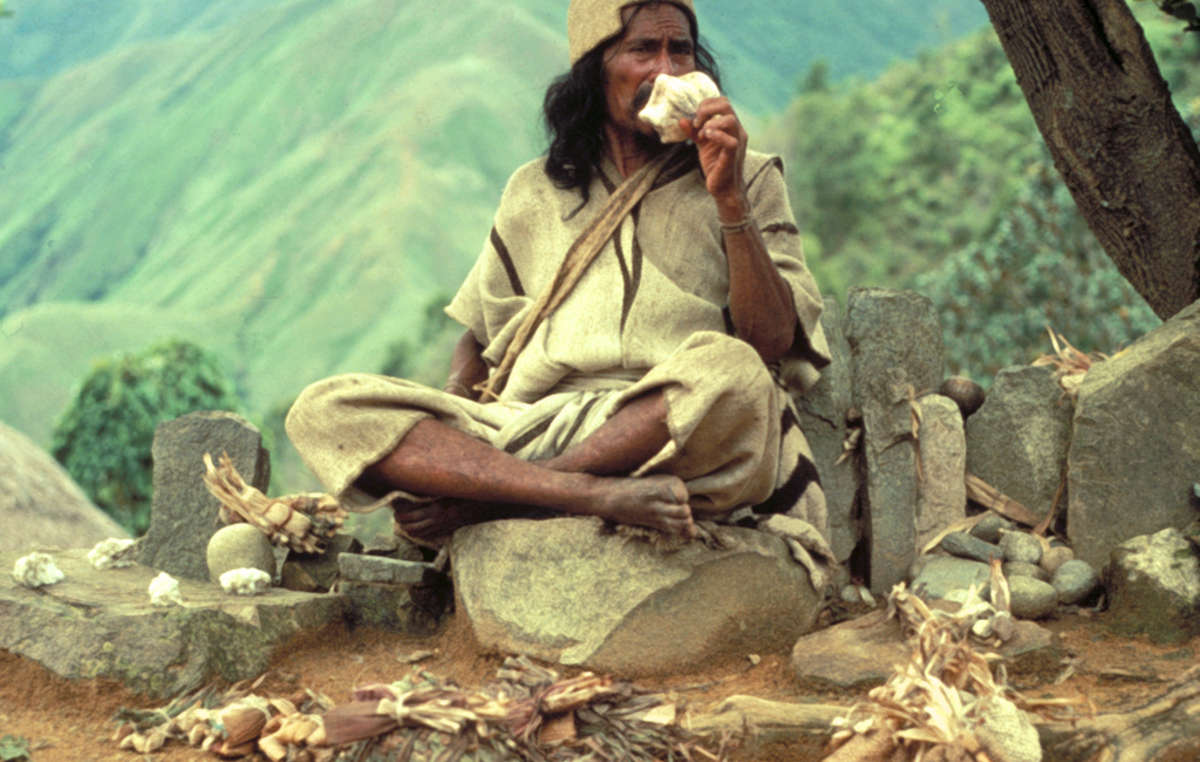 Spiritual leaders are called Mamos. The Mamo is charged with maintaining the natural order of the world through songs, meditations and ritual offerings.

Mamo training begins at a young age and continues for around 18 years. The young male is taken high into the mountains where he is taught to meditate on the natural and spirit world.

In Western culture, the Mamo could be seen as the priest, teacher and doctor, all rolled into one.

The coca leaf plays a central role in daily life and is used in offerings and ceremonies.

Each man carries a bag of the leaves, which are chewed to create a mildly stimulating effect. When two men meet, a handful of leaves is exchanged as a sign of mutual respect.

A hollowed-out gourd called a ‘poporo’ contains crushed seashells. A stick is used to transfer the powder to the wad of coca in the mouth – the highly alkaline shells react with the coca to stimulate its active ingredients. Surplus powder is rubbed on the neck of the poporo – over time, this becomes a thick collar. 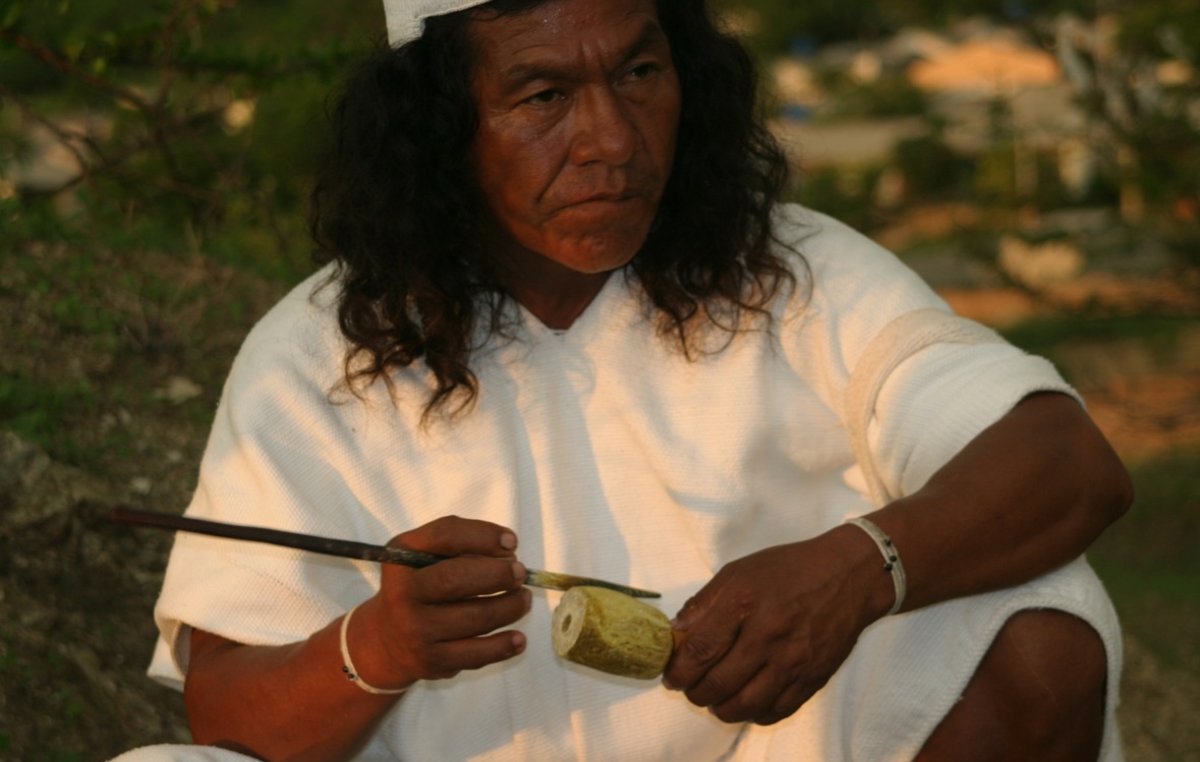 The poporo is a symbol of manhood and a mark of civilization amongst the people. © Danilo Villafañe

Coca is also grown by non-Indian settlers as the raw material for cocaine. Colombia has long been dubbed the cocaine capital of the world, and its production has had devastating consequences for the indigenous population.

The lower slopes of the Sierra have been occupied by colonists growing coca for the drug trade that funds much of the armed conflict between guerrilla groups and paramilitaries in the country’s long-running civil war.

Despite the Indians’ peaceful nature, they have frequently been caught in the crossfire between the army and illegal armed groups, and many have been killed or forced to flee from the quasi-civil war raging on their land.

Keep off our land! 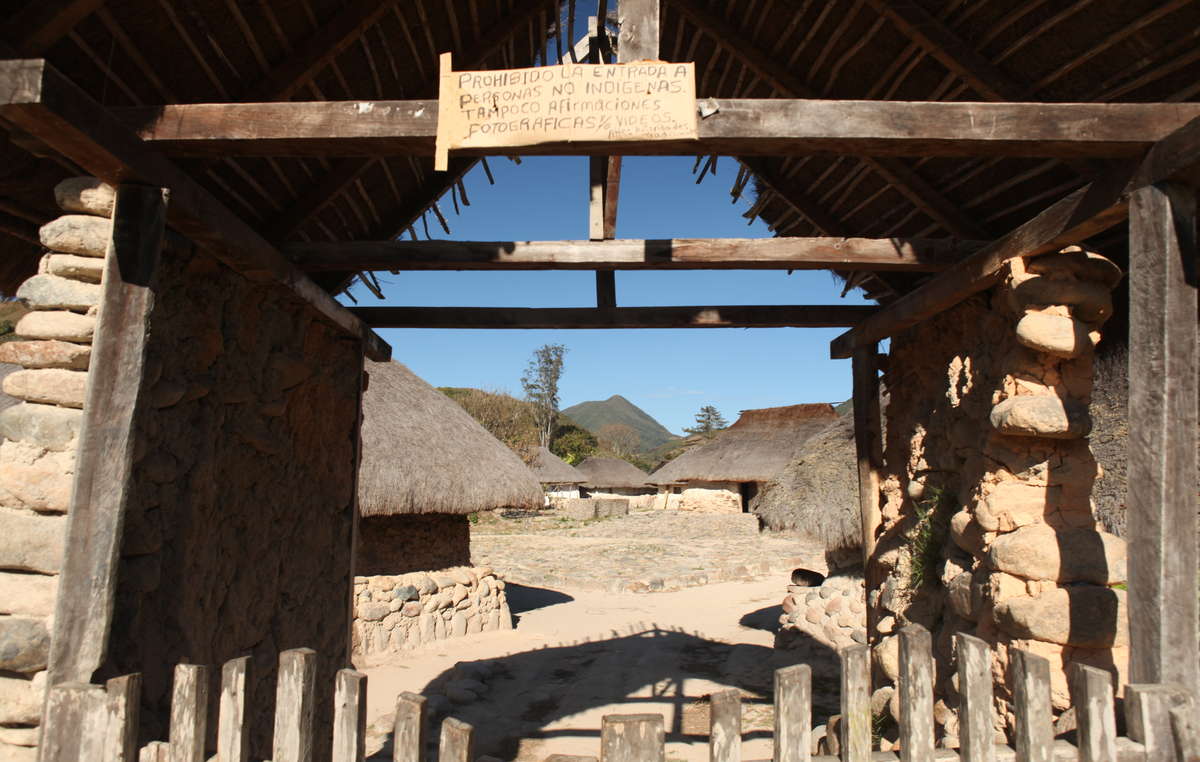 The entrance of non-Indigenous peopel is prohibited’, sign at an Arhuaco village © Kelly Loudenberg/Arianna Lapenne

‘
For us, grave robbing is the same as taking a mother and removing her guts, taking out her teeth and replacing them with dentures, removing an eye and replacing it with glass.Mamo Ramon Gil
’

The Sierra Indians are descendants of the Tairona, a great civilization whose masterful gold work and architecture draw tourists and grave robbers alike to the region.

Each tribe has adapted to the invasion of their lands in its own ways: the Kogi shunned outside invasion by fleeing higher up the Sierra. They have remained particularly averse to visits from camera-toting tourists.

The Arhuaco, whose men are distinguished by their white conical hats, organized a strong political movement to defend their rights, while the Kankuamo living on the lower foothills were almost entirely integrated into mainstream society.

Water is highly revered by the Indians and there is strong opposition to existing and planned hydroelectric dams in the region. Dams interfere with the natural water cycle of the Sierra and threaten the tribes’ crops and livestock.

Privately owned land and development projects are making it increasingly difficult for the Indians to move within their ancestral territory and make offerings to keep the world in balance.

To act now on behalf of the Sierra Nevada Indians, you can:

News from the Sierra Nevada Indians 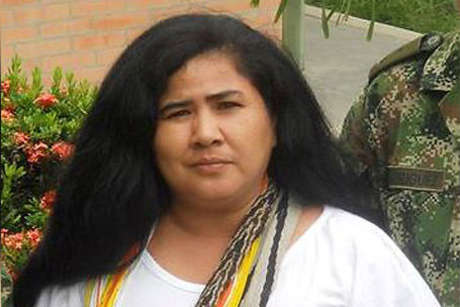 A leader of the Wiwa tribe and a campaigner for both Indigenous and women’s rights has been killed. 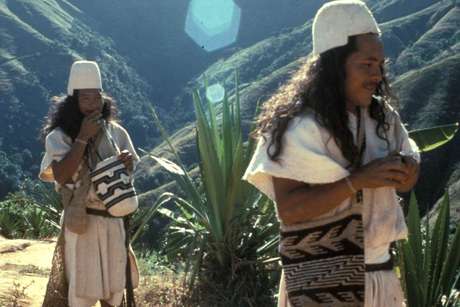 In a tragic week, Kogi, Wiwa and Arhuaco Indians have been killed in three separate incidents. 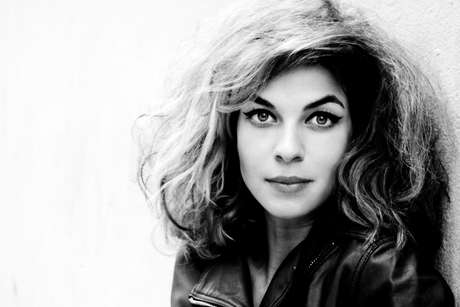 Game of Thrones star speaks out over Colombian killing

Game of Thrones star Natalia Tena has lent her support to bring the killers of Colombian Indian leaders to justice. 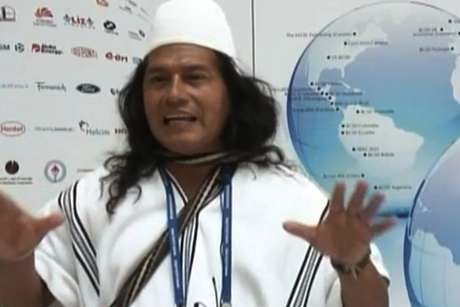 Two Arhuaco children have been killed after playing with unexploded shells left by the Colombian army.

Two Arhuaco Indians from northern Colombia have been found beheaded after being seized by right-wing paramilitaries.