A series of mega dams is being built as a central part of Brazil’s Accelerated Growth Programme, which aims to stimulate the country’s economic growth by building a huge infrastructure of roads and dams, mainly in the Amazon region.

The size of these projects threatens to harm or destroy vast areas of land, upon which numerous tribal peoples, including several groups of highly vulnerable uncontacted Indians, depend for their survival.

The Belo Monte project is a prime example.

The Brazilian government is constructing the Belo Monte mega-dam on the Xingu River in the Amazon. 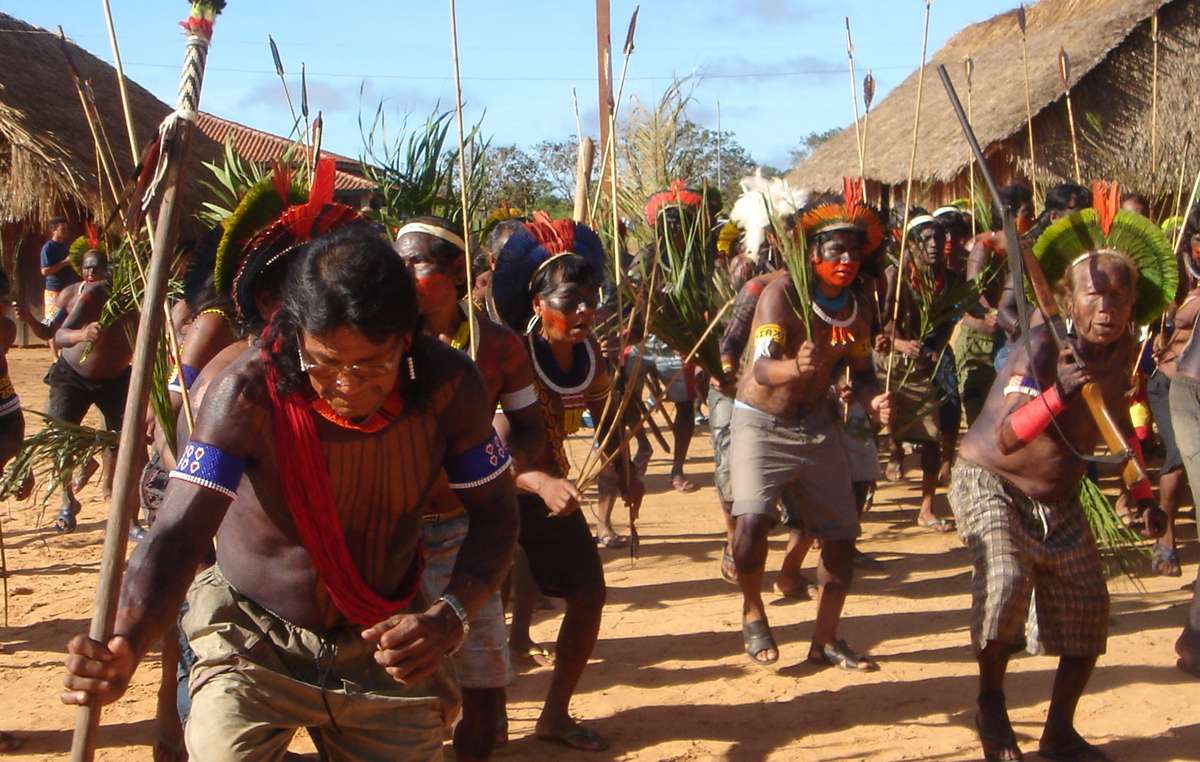 Kayapó dance at an anti-dam protest, Piaraçu, Mato Grosso, Brazil, 2006. Two hundred representatives of the Mebegokre Kayapó people met for five days to discuss the Belo Monte dam and four other dams which will devastate their lands. © Terence Turner/Survival 2006

The dam, if completed, will be the third largest in the world and it will flood a large area of land, dry up certain parts of the Xingu river, cause huge devastation to the rainforest and reduce fish stocks upon which Indians in the area, including Kayapó, Arara, Juruna, Araweté, Xikrin, Asurini and Parakanã Indians, depend for their survival.

The livelihoods of thousands of tribal people who depend on the forest and river for food and water could be destroyed.

The influx of immigrants to the area during the construction of the dam threatens to introduce violence to the area and bring diseases to these Indians, putting their lives at risk. 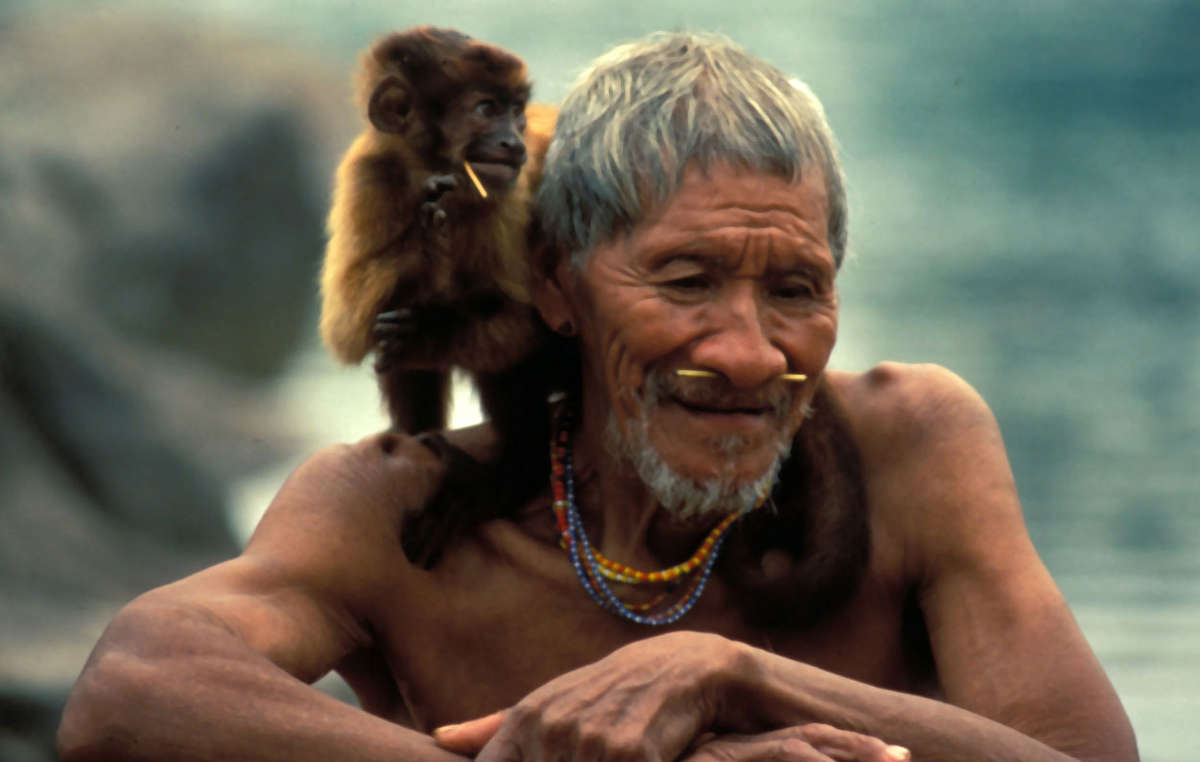 Kayapó Indians and other tribes of the area have been protesting against the dam since it was initially proposed in the 1980s.

In a letter to President Lula, the Kayapó said ‘We don’t want this dam to destroy the ecosystems and the biodiversity that we have taken care of for millenia and which we can still preserve’. 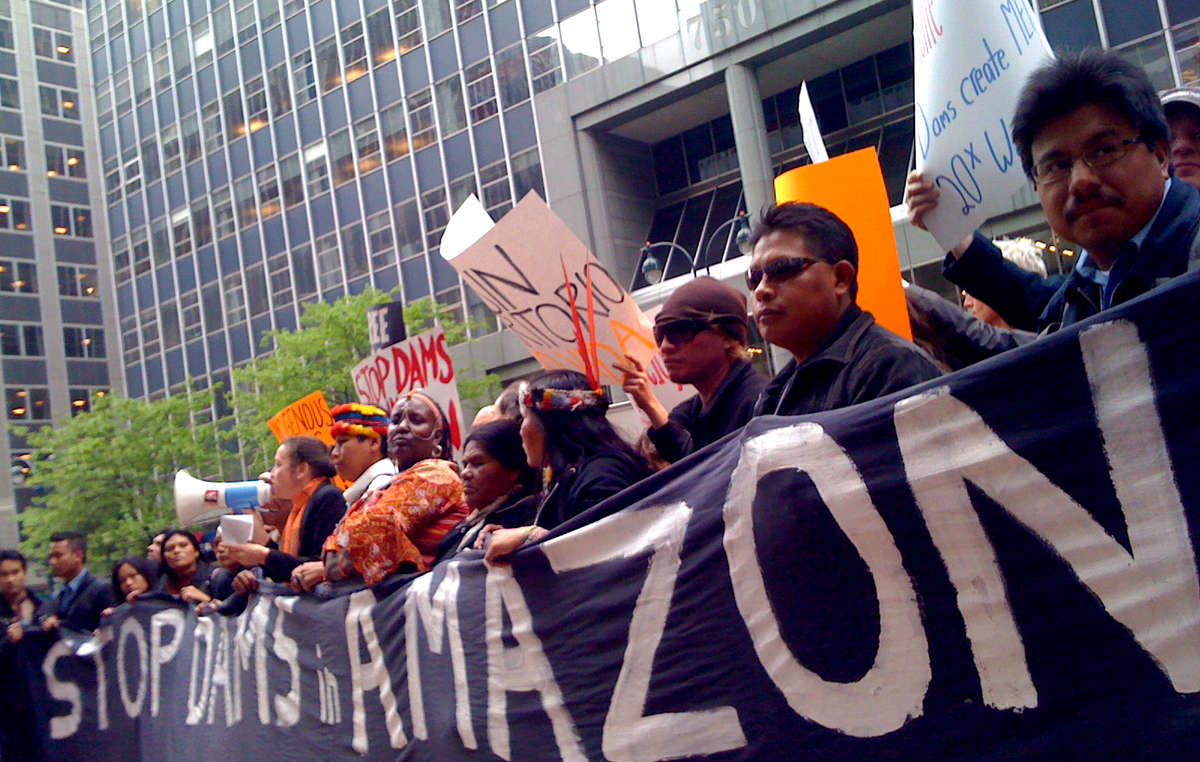 American actress Sigourney Weaver demonstrates with indigenous people from around the world against Brazil's Belo Monte Dam as part of the Brazilian Permanent Mission to the UN, New York, USA. © Amazon Watch

The Indians say that they will oppose the dam at all costs, and that if construction proceeds, the Xingu river will become a river of blood.

Brazil’s Public Prosecutor’s Office, alongside numerous local and international organisations, have called for the license to be suspended, stating that the environmental impact studies were incomplete, and that the Indians and other people who will be affected were not properly consulted.

If the construction of this dam continues, thousands of people will lose their homes, their livelihoods, and their lives. Indigenous peoples need their land in order to survive and, having lived there for centuries, they have a deep, spiritual link to it.

No amount of compensation or mitigation measures can replace their ancestral land.

Write a letter in support of the Indians. From Survival’s website

Serious Damage, Survival’s report about the impacts of dams on tribal people

Battle for the Xingu film