Tribal peoples and their rights must be at the heart of the environmental and climate movement. 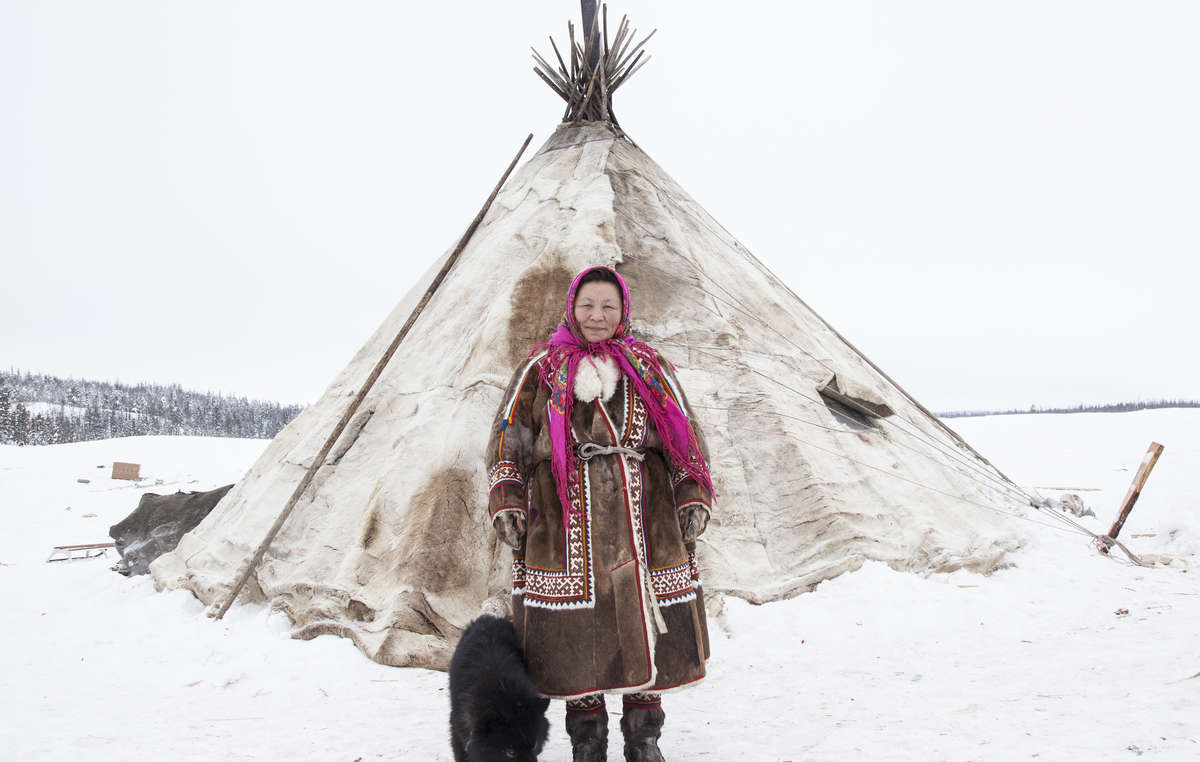 Indigenous people in the Arctic are among those most affected by climate change already. © C. Sarmik/ Survival 2014

Tribal and Indigenous peoples are on the frontline of climate change. They are already suffering but their voices are silenced or marginalized.
They live where the impacts of climate change are likely to be greatest and they depend largely on the natural environment for their livelihoods and way of life.

They are more vulnerable to climate change than others but are the people who contribute the least to it.

Many of the drivers of climate change—including oil, gas, mining and deforestation— have already destroyed Indigenous lands.

Some of the “solutions” proposed to stop climate change also threaten the lands and lives of tribal peoples. “Mitigation measures”, such as so-called “natural climate solutions”, threaten to violate their rights and make it easier for governments, companies, big conservation organizations and others to steal, exploit and destroy their land.

Tribal peoples must be key partners in the fight against climate change and their land rights must be recognized. They are the best guardians of the natural world and evidence shows that their territories are the best barrier to deforestation. They have unique knowledge about their environments.

"Climate change has started in our country. The rich countries have burned and destroyed many kilometers of Amazon forest. If you cut down big trees and set fire to the forest, the Earth dries up. The world needs to listen to the cry of the Earth, which is asking for help."
Yanomami, Brazil.

What is climate change?

Climate change refers to the average rise in the earth’s temperature that results from human-induced greenhouse gas emissions. It is mostly produced by the burning of fossil fuels but deforestation also causes about 10 percent of greenhouse emissions, as forests act as “sinks” that absorb and store carbon, which is released if they are burned.

Even though it’s caused by industrialized societies, many of the solutions proposed to mitigate climate change expect tribal peoples to pay the price of the destruction “we” are causing. These supposed solutions are decided and imposed without the consent of tribal peoples. And they won’t work. One scheme called “Reducing Emissions from Deforestation and Degradation” (REDD+) has already caused problems for many communities but has done nothing to prevent climate change. Many conservation organizations now want to greatly increase the amount of land under strict wildlife protection. This will push out the original inhabitants, but won’t stop biodiversity degradation or climate change. 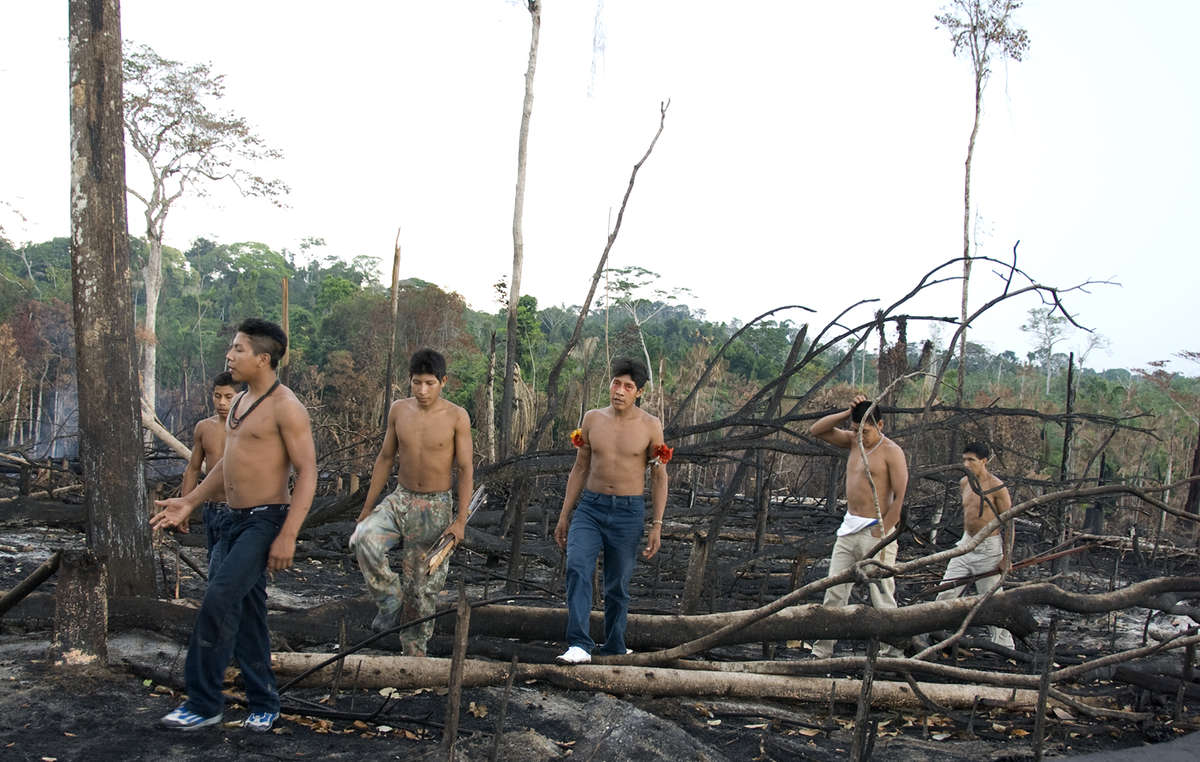 A group of Awá men survey an area of their forest that's been burnt by ranchers. ©Survival © Fiona Watson/Survival

What are we fighting against?

Evidence proves Indigenous peoples understand and manage their environment better than anyone else. 80% of Earth’s biodiversity is in Indigenous territories and when tribal peoples have secure rights over their land, they achieve at least equal or better conservation results at a fraction of the cost of alternatives.

But tribal peoples are being illegally evicted from their ancestral lands in the name of “conservation”, to create national parks and other protected areas that are supposed to mitigate climate change.  Local people are accused of “poaching” when they only hunt for food. And they face arrest, beatings, torture and death in their own territories, while fee-paying big game hunters are encouraged. They’re blamed for wildlife decline that they didn’t cause.

Big conservation NGOs, like WWF, are now pushing to double the world’s protected areas so that they cover thirty percent of the globe’s lands and oceans. The same NGOs partner with logging companies and corporations responsible for enormous carbon emissions.

This idea, now called “New Deal for Nature”, will have terrible consequences for our environment and tribal peoples. It will steal the lands from those best placed to protect it and will divert the attention from the roots of the environmental destruction. Many protected areas invite mass tourism, and are often home to trophy hunting, logging, and mining operations.

The idea of projects based on “offsetting” is that corporations and governments responsible for an amount of carbon dioxide emissions, can fund projects elsewhere that “capture” the same amount of carbon. This allows the real polluters to greenwash their image, while not reducing their emissions.

There are two key ways of doing this. Both are ineffective and dangerous for Indigenous peoples. And they also divert money away from efforts to reduce fossil fuel emissions.

REDD+ projects which supposedly protect forests from being deforested, generate carbon “credits” that corporations and governments can buy to “offset” their carbon emissions. Indigenous people have repeatedly voiced concerns about REDD. It puts a price on their lands and forests which is likely to result in even more land grabs. A large proportion of the world’s forests in REDD schemes, are territories of Indigenous peoples or other local people. These projects undermine their ways of life.

Another way to “capture” significant amounts of carbon is “natural climate solutions” such as planting more trees. But many offset projects sow fast-growing tree crops like eucalyptus and acacia, to make money. This can actually increase rather than reduce carbon: existing vegetation has to be cleared and the new plantations are more liable to fires. Most such plantations are harvested in a few years to make things like paper and charcoal which quickly return all the captured carbon back to the atmosphere. Many plantations would need to grow for decades before they start absorbing much carbon. Large scale tree plantations destroy biodiversity and Indigenous peoples’ lands.

Tribal peoples are being illegally evicted from their ancestral lands in the name of “conservation:” these Khadia families were thrown out of Similipal Tiger Reserve and forced to live for months under plastic sheets. ©Survival

"We have seen the experiences of other Indigenous people, who accepted REDD and its carbon credits and conservation projects. They can no longer hunt, grow crops or use materials they need for celebrations and rituals. We know how to take care of nature because she is our mother and we don't want another carbon credit agreement, because it is just another way of removing us from our sacred lands."
Kayapo, Brazil

What are we fighting for?

We need to decolonize the environmental movement and give space to the experiences, voices, and views of the most marginalized and vulnerable peoples in the world. Tribal peoples have been living from and managing the most biodiverse places on earth for generations.

We must bring human diversity into the center of climate action because those who live most differently to us are those who have some of the best answers about how to live at all.

We must stop land grabs in the name of conservation or climate change.

It’s a matter of urgency. For tribes, for nature, for all humanity.

"The gift of biodiversity is ours at the moment, but if we lose it, it won't be just that we lose the animals and the plants; us humans will suffer as well. I can tell you that there are rivers here whose beds are drying up, and this has never happened before. Nowadays we can't eat wild mangoes as we used to in the dry season, because they don't grow like they used to. These are just some of the changes happening due to the destruction of the forest."
'Baka, Cameroon'
It's time to listen
Only together can we fight climate change
Climate change isn’t a thing of the future
We are always fighting to save our planet
Find out more
Diversity Rules Environment, OK?
New Deal for Nature: Paying the Emperor to Fence the Wind
30% by 2030 and Nature-Based Solutions: the new green colonial rule