Mogetse Kaboikanyo was a Kgalagadi man who lived alongside the Gana and Gwi Bushmen in the Central Kalahari Game Reserve, Botswana. In February 2002 he was forcibly relocated to a camp outside the reserve. He died just four months later. He was probably in his fifties; his friends said his heart stopped beating. After years of struggling to remain on his land, Mogetse was buried in the desolate relocation camp, far from his ancestors’ graves.

Mogetse spoke to Survival International before he was thrown off his land. Those who met him believe that he would have been pleased to know that his words would be ‘shouted around the world’. This is his testimony. Survival will ensure that his words become a permanent memorial to the Bushmen’s fight for justice. 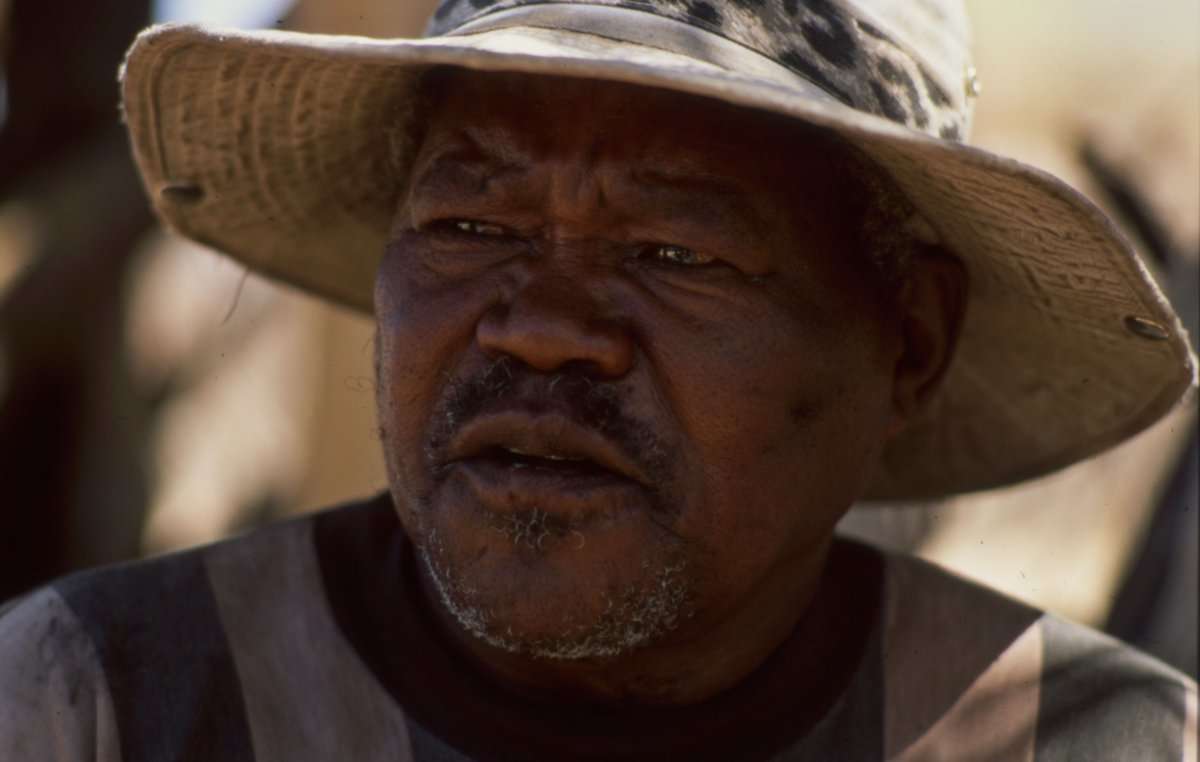 "Gugama, the creator, made us. That was a long time ago – so long ago that I can’t know when it happened. That is the past, but our future comes from the lives of our children, our future is rooted in the hunt, and in the fruits which grow in this place. When we hunt, we are dancing. And when the rain comes it fills us with joy. This is our place, and here everything gives us life.

God made us, and He made the animals for us. Why does the government think they are more important than the people? The government just wants to take all our good things. The government is like a poor fellow who sees a rich man and is jealous and wants to take what he has. Now we must live in the shadow of being thrown off our land. There can no longer be any rest.

I was born in this place and I have been here for a very long time. Now this relocation thing has come, but I don’t have the full truth about it. They come and say that I have to move, that this place is for animals. But why must I move and leave the animals? I was born with them and I must stay with them. I have that right.

I was born in this place, with the eland. And we have to stay together. My strength is the force in the animals which my father once hunted and my mother cooked. They gave me everything you see here. This is my birthright: here where my father’s body lies in the sand. Who are they who want to chase me from my life which was given to me by God? My father’s spirit warned me this would come.

They have already taken my relatives. My brother has been taken and I am here alone. But I am not going to leave. If they want to kill me why don’t they just do it? They will kill me for my land. When they come I say, ‘I don’t want you to come here, but if you must, then leave your guns behind. If you come with your guns – ready for war – you will have to kill me. I won’t do what you want.’

Now I am pleased because Survival is noting my words and I think that you will shout them out so that many people will learn my story. I am harassed by the government of Botswana. We are chased off our birthright, our place. I think that God cannot accept that: Gugama created the things here so that we can use them for our survival.

The officials bully people and move them without even asking them. They say, ‘Tear down your houses, and we’ll load them on the trucks, and we’ll load you as well.’ When they went to the community at Gope there was an old woman who was very, very sick. They put her on the truck anyway, and so she died there, on the way to the relocation camp. Another woman died as well, but the officials don’t even respect that a person has to be buried.

These things are done to us because we are Bushman people. This is not the way for anyone to behave. You should ask people what it is they want, and then wait and listen to them. The officials who come here never even try to respect me. I have to explain that I am a human being, and then they stare at me, up and down!

The government of Botswana calls itself a democracy. But it isn’t so here. We are oppressed until we die, and soon there will be no one left. It seems that there is a great distance between me and the government; when we went to try and meet a minister, he didn’t even recognise us. That was very rude.

We are just like pieces of rubbish flying off when the wind comes, or like insects running in the sand. They sweep us off our land and dump us on the rubbish pile, far from our animals and plants and spirits of the ancestors . That is what you do to rubbish, but not to people.

Once the officials came and said someone had hunted an eland, so they killed one of us and castrated another. That is not what you do to human beings. They say we cannot hunt, but I have children and women to feed. I used to give them meat, now it’s just roots and fruits. Life is harder and harder.

The government talks about development. Let it help us with water, then leave us to our own place. We can think for ourselves; we can think about what we need. Our future comes from the lives of our children. Development can only come in their own place. “They have to have their ancestral land.”