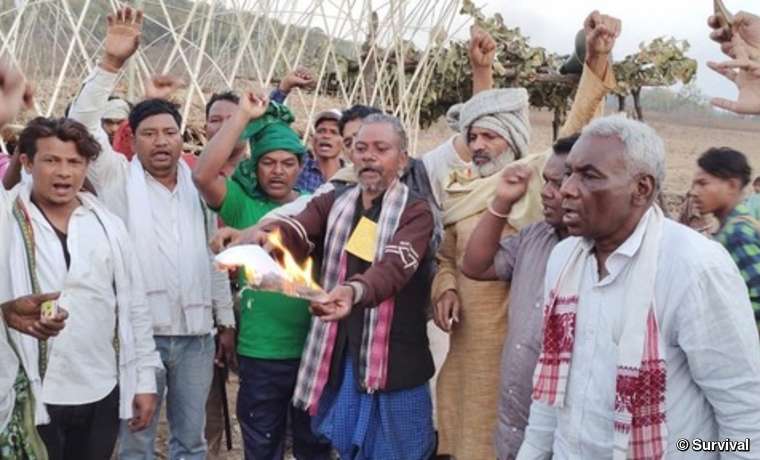 Adivasis burning copies of the farm laws in India.
© Survival

India is being rocked by the farmers’ protests which have gripped the country. Although the focal point of the protests is Delhi, there have been protests nationwide by farmers and those supporting them against the “pro corporate” farm laws introduced by PM Narendra Modi. Less visible among the protesters are the many Adivasi (tribal and indigenous) farmers who will be devastatingly affected by the new laws.

The Adivasi Adhikar Rashtriya Manch [National Forum for Adivasi Rights] says: “Adivasis of the country would be the worst victim of the situation” and has demanded that Modi’s government “refrain from repressive measures” against protestors and repeal the laws.

For Adivasi farmers protesting in Maharashtra, the farm laws are inextricably tied up with the failure of the government to recognise and respect their rights under the Forest Rights Act (FRA). This vital piece of legislation was designed to right the “historic injustice” of exploitation and eviction that Adivasis have faced. For Adivasis protesting in Jharkhand, there is fear that the new laws will add to the alienation of families from their lands, as their debts to the corporates would rise, as would food prices. At stake is the autonomy of the Adivasi communities and their connection to their lands and — with that — their indigenous knowledge and livelihoods.

Indebtedness among farmers is already a vast problem in India and is a major contributor to the horrendous rate of suicides amongst them. Where Adivasi farmers have resisted the onslaught of pressure to buy corporate seeds, high inputs of agrochemicals and the mortgaging of their lands to pay for these ‘goods’, their mental and physical health is far stronger, as are their communities.

Adivasi farmers tend to have small plots, which are under real threat from the new laws, which aim to ‘pool’ small farms into larger ones. If this goes ahead it could seriously diminish Adivasis’ self-determination, livelihoods and food security. The fear is that these pools will not be healthy co-operatives of Adivasi farmers working together, but could become controlled by a few powerful individuals or agribusinesses.

Profound inequalities leave Adivasi farmers without sufficient bargaining power to demand fair prices, especially as these laws open the agriculture markets up to big corporations. Minimum support prices are also under threat from these laws. In the state of Bihar, where similar laws have already been enacted, minimum prices for crops have dropped drastically — with terrible consequences for small farmers — including Adivasi ones.

There are concerns too that powerful corporations will control the markets, especially the mandis (wholesale markets) where the majority of farmers sell most of their goods. Ram Lal Kariyam is an Adivasi leader from Chhattisgarh. To him, the risks are serious:

Millions of Adivasis are not just land-poor, but land-less. Despite determined resistance movements, there have been wave upon wave of brutal evictions of Adivasis as their lands have been taken for mines, dams, plantations, and conservation areas. Some are accused by the government of ‘encroachment’ for farming land that they have farmed for generations, but to which they have yet to have their rights formally recognised under the FRA. Others are evicted for conservation or extractive projects. This has left hundreds of thousands of Adivasis landless, and reliant on agricultural laboring. The corporatisation and mechanization of farming that the new laws could bring, would severely impact farm labourers. Their numbers at the protests are fewer, however, as they typically have to work every day in order to keep their families fed.

Calling for Adivasi, women and Dalit farmers to be consulted and for the FRA to be taken into account, the veteran journalist, P Sainath asked:

“Why weren’t there any consultations with farmers, why was there no discussion in Parliament, why no joint meeting of the political parties, why was it not brought to the parliamentary Standing Committee? …The farm laws were brought by consulting the corporates.”

The role of the corporates in influencing policy in India at this time cannot be overstated. An effigy with three heads — Narendra Modi, Mukesh Ambani and Gautam Adani — was burned at the farmers’ protests in October 2020 as farmers denounced the new farm laws and wider policies of Modi’s government which, they say, aids powerful corporations at their expense. Ambani and Adani are both billionaires who head corporations which are closely tied to Modi personally, and have benefitted greatly under his reign. As the protests raged, corporates like Vedanta tweeted their support for the laws. However, President of the Congress Party, Rahul Gandhi, tweeted: “The ‘Adani-Ambani Farm Laws’ have to be revoked.”

In parallel with the corporatization of agriculture, Modi has thrown open mining in India to private corporations too, especially in the tribal heartland forests of central India. Modi is claiming that this will make India more “self-reliant”. But the most self-reliant communities in the country have the most to lose and are determinedly resisting the felling of forests, mining of lands and polluting of waters. With the loss of their lands, indigenous people lose everything: as Guarani-Kaiowá Indigenous leader Marcos Verón said:

“Our land is our life, our soul. Without it we die.”

Those who resist are frequently and falsely labelled as ‘Maoists’ or ‘Naxalites’ — sympathisers of the armed resistance fighting India’s underreported civil war. They are accused of terrorism, sedition and other serious offences for simply trying to defend their lands and lives. The draconian ‘Unlawful Activities Prevention Act’ (UAPA) has been a weapon hurled by the Modi government at anyone who stands against state injustice. In a statement, the International Solidarity for Academic Freedom in India pointed out: “Terms like ultra-leftists and urban Naxals are ill-defined and serve as excuses to imprison anyone who speaks up and points to injustices. It is not the case that “Maoists” are infiltrating the farmer movements. It is rather the case that the corporate state is infiltrating into people’s lands, plundering the mountains and forests and rivers.”

Journalists are increasingly being persecuted too. In the wake of the dramatic protests on Republic Day, journalists and editors have been accused of sedition for simply reporting on a protestor’s death. According to a recent study, in 2020 alone, 67 journalists were arrested and almost 200 were attacked. The mainstream press is increasingly cowed and outwardly supportive of Modi — at great danger to what remains of India’s democracy.

To try to crush the farmers’ protests, in addition to the journalistic repression, huge barricades have been erected, mobile internet for more than 50 million people was shut down, and police have been increasingly weaponised. Modi should know that once he needs to impose his laws with tear gas and police batons, and by shutting down freedom of speech, he is beginning to preside over the death of the world’s largest democracy. But the repressions continue. A young Fridays for Future activist, Disha Ravi, was arrested for sharing information on how to use social media to support the farmers’ protests. She was accused of sedition, leading the judge involved to state: “The offence of sedition cannot be invoked to minister to the wounded vanity of the governments.”

Now the world is watching Modi’s treatment of the protestors. But it is vital that the least visible, most at-risk people are also seen: the nation’s 104 million Adivasis. Survival International is working to amplify their voices and resistance to the trampling of their land, forest and indigenous rights by this increasingly authoritarian regime.