This page was last updated on August 31, 2009 and may contain language which is now outdated.

"This is the only place where the land is clean in this region, we must keep this territory clean because if an oil company comes then we won't be able to hunt and keep reindeer, it will be the end." Khanty hunter

In Siberia, Russia's tribal peoples are being pushed off their land by oil, gas and mining developments. They have no right to own their land under Russian Federal law. The Khanty people are one of Siberia's 30 tribes and their experience is typical: they have been driven from their land, exploited and tricked by oil and gas companies – many have been reduced to alcoholism and suicide.

Like all Russia's tribal peoples, the Khanty suffered greatly under the Soviets – they were forced into communal farms, their religion banned and their shamans killed. Despite these atrocities, they fought back. After the collective farm system was abandoned, many returned to their land and continued to live by hunting, fishing and herding. This way of life was again threatened in the 1960s when the oil and gas industries descended on their land.

When the companies arrived they built towns, polluted the forests and sacred lakes, killed the reindeer and scared off the game. Many Khanty were forced off their land and into 'native villages'. In 1994 the Khanty Mansiisk administration gave land documents to people still living by hunting and fishing, but gave nothing to the many who had already been driven from their land.

Under local legislation those Khanty who have documents for their land can refuse to let oil companies enter their territories, or can permit the companies to work on their land in return for compensation. In reality, the oil companies often don't approach the Khanty until they have already drilled for oil or built a road. They deceive the Khanty by claiming the Khanty cannot stop them developing their land. Even if the Khanty sign an agreement for compensation, the companies invariably fail to give what they promise – a skidoo or boat engine and some rations in exchange for the destruction of their land.

In many areas the forests have been destroyed by the oil industry – they will take 100 years to recover enough to sustain reindeer, which are central to the Khanty way of life. The Khanty have been marginalised, ignored and pushed aside in the hunt for oil and gas.

Life expectancy for Siberia's tribal peoples is significantly lower than for Russians. 37 year old reindeer herder, Demitri, had 27 in his class at school. Only six or seven are alive now. Two hanged themselves and many others died in drink related incidents. Khanty who lose their land and can no longer herd reindeer, hunt or fish are often driven to vodka – brought in by oil workers.

Khanty wish that the oil companies had never come to their land, but many are no longer able to survive without the little compensation the companies pay. There isn't enough game for them to hunt and they have to travel long distances to reach rivers clean enough to fish in – they need skidoos to make these journeys. The Khanty need proper compensation from the oil companies. In the areas where the extractive industries have not yet struck, the people need to have the right to deny oil workers if they choose.

The Russian federal law needs to be changed to recognise the rights of Siberia's tribal peoples, including the Khanty, to the ownership of their land and its resources. These rights should be inalienable so that the companies are not able to bully or bribe their way into taking the land from its true owners. Russia's Indigenous peoples have been asking for many years for the government to ratify ILO Convention 169 for the rights of tribal and Indigenous peoples, which includes such land ownership rights. 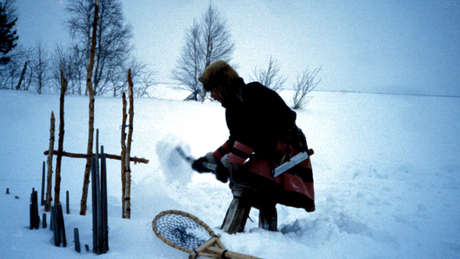