Gold miners have been spotted close to Moxihatatea (uncontacted Yanomami). Above, one of the Moxihatatea communal houses, seen from the air. © Guilherme Gnipper Trevisan/FUNAI/Hutukara

This page was last updated on March 26, 2020 and may contain language which is now outdated.

Davi Kopenawa, a Yanomami leader and shaman has made an urgent statement warning that a group of uncontacted Yanomami “could soon be exterminated” if the Brazilian authorities do not act now to remove goldminers working illegally on the tribe’s land.

He says the group, known as the Moxihatatea, are in grave danger: “They have fled many times. But now, they can no longer run away and are surrounded by violent miners who wanted to take revenge by shooting at them with shotguns.

“I am very concerned. Perhaps they will soon be exterminated… The miners will undoubtedly destroy them all by killing them with their shotguns and their illnesses, their malaria, their pneumonia.”

The statement was delivered before the coronavirus pandemic hit the headlines; the virus hugely adds to the danger posed by thousands of outsiders inside the Yanomami territory.

Davi highlights the risks posed to other uncontacted Yanomami communities who are also at great risk from the miners: “We are very worried about what might happen to them. They are the ones who truly care for the forest. It is the Moxihatetea and all the other uncontacted peoples of the Amazon who still look after the last forest.”

He made the appeal during the recent UN Human Rights Council session in Geneva. Asking the UN to put pressure on the Brazilian government, he declared: “My people must be able to live in peace and in good health, because they live in their own home. We are in our home in the forest! The outsiders cannot destroy our home, otherwise it will not end well for the world. We take care of the forest for everyone, not just for the Yanomami and uncontacted peoples. We work with our shamans, who know these things well and have wisdom that comes from contact with the Earth. The UN needs to speak to the authorities in Brazil so that they remove – immediately – the prospectors from our forest who are encircling the uncontacted peoples and everyone else."

The Yanomami territory, the largest Indigenous reserve in Brazil, was recognised by the Brazilian government in 1992. However it has been frequently targeted by goldminers since the 1980s. They have introduced diseases such as flu, measles, pneumonia and malaria against which the tribe has little or no immunity. Many Indians have died as a result.

Hutukara, the Yanomami association estimates there are some 20,000 goldminers working illegally in the territory today, despite recent efforts by the authorities to destroy mining camps and close off the rivers to dredges and river traffic.

The miners continue to spread fatal diseases and destroy the forest, streams and river beds. They use mercury to separate gold which leaches into the aquatic system poisoning the fish and rivers on which the Yanomami rely.

This catastrophic situation was highlighted in two recent scientific studies which showed that in some communities located near the mining camps up to 90% of Yanomami have dangerously high levels of mercury in their bodies. The effects of mercury poisoning will have devastating consequences for their survival and quality of life.

Health care in the territory is at best precarious and in some regions almost non-existent since the Bolsonaro government terminated the agreement with Cuban doctors who were delivering vital health care to remote regions in Brazil.

In 2017 FUNAI, the government’s Indigenous affairs agency, closed down five of its 17 protection posts which monitored and protected uncontacted tribes’ land, including the base near the Moxihatatea.

This act of criminal irresponsibility exposes these highly vulnerable peoples to even more violence and disease. FUNAI is reportedly rebuilding its base near the Moxihatatea, but there are fears this will take a long time.

If the authorities do not act now to expel all goldminers and protect the Yanomami territory the consequences will be disastrous for all the Yanomami, and especially the Moxihatatea and other uncontacted communities.

The Right Livelihood Foundation, Survival International and 36 Right Livelihood laureates recently sent a letter to Brazil’s minister of justice urging him take urgent measure to protect the Yanomami people and their land. 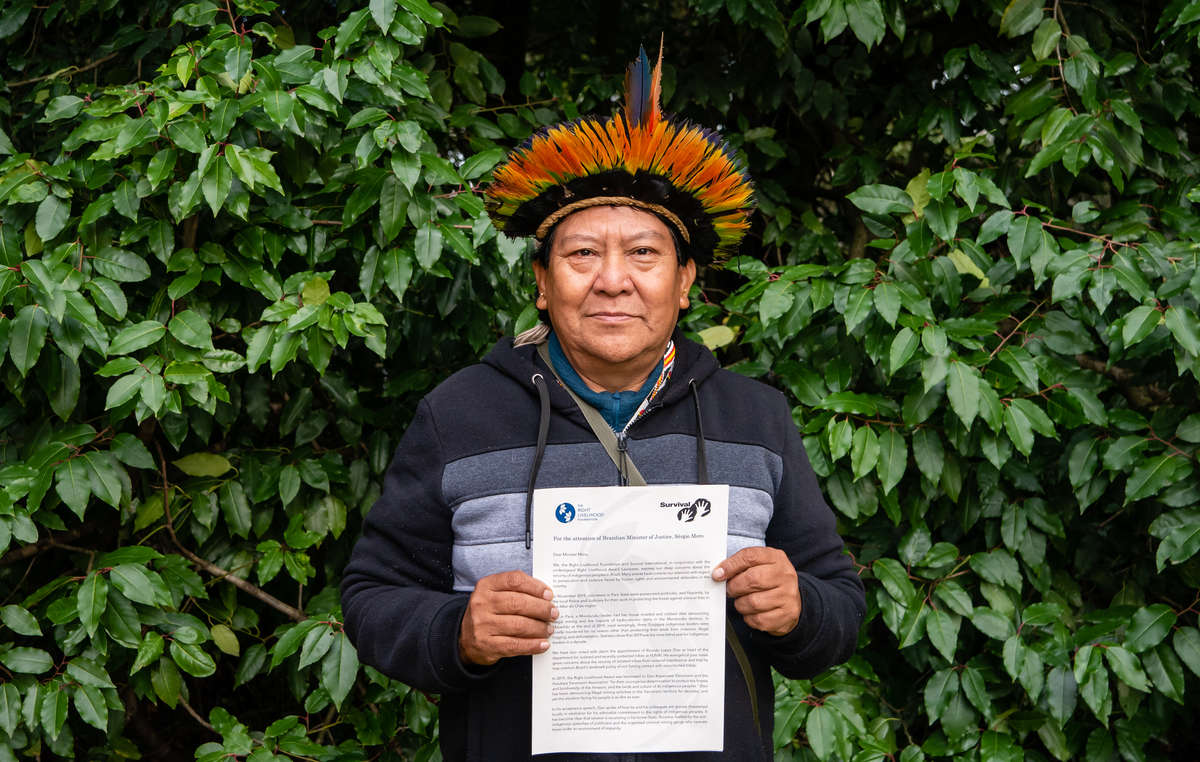 Davi delivered his statement at a side event on the serious situation of uncontacted tribes in Brazil with the Arns Commission and the Socio-environmental Institute – ISA on 3 March in Geneva: Read the full statement here.