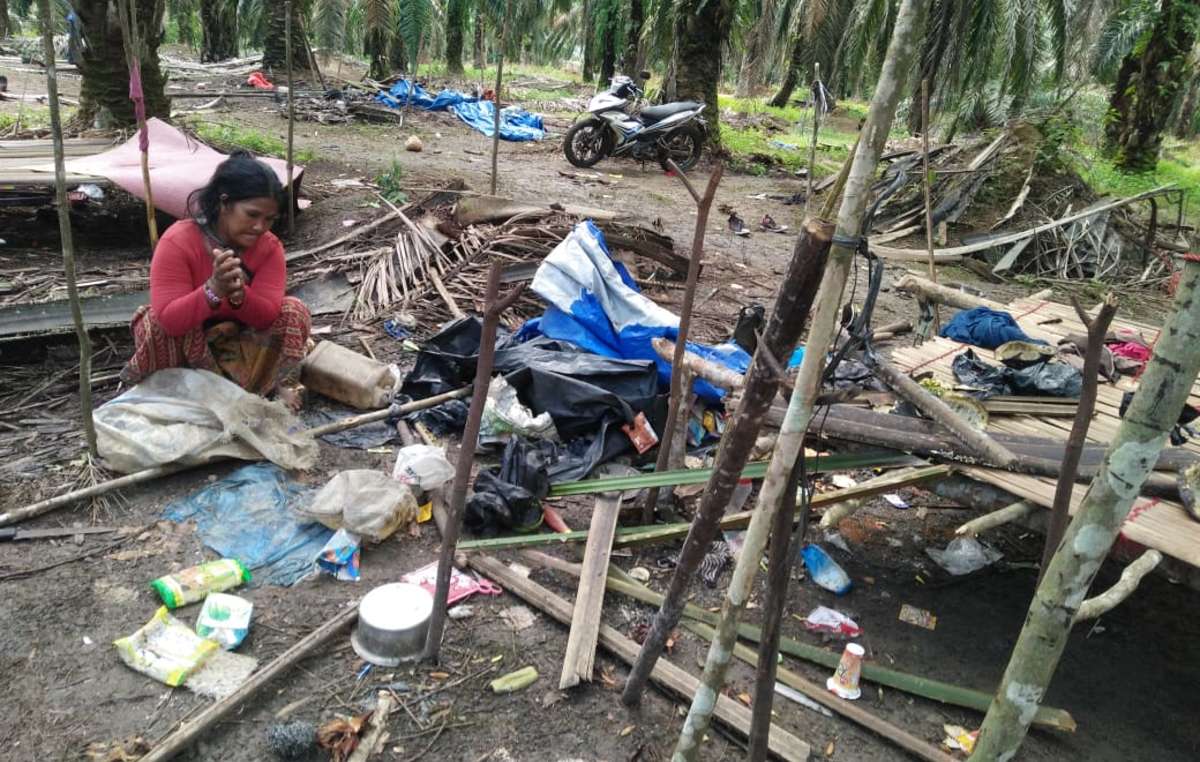 An Orang Rimba woman surveys the remains of her house and possessions which have been destroyed by an angry mob. The attack happened after Orang Rimba tried to collect fallen oil palm fruits on their ancestral lands, so they could feed their families during the pandemic. © Warsi

Eight members of the Orang Rimba tribe have reportedly been attacked after attempting to collect fallen oil palm fruits from a plantation on their ancestral lands in Indonesia’s Sumatra province. Orang Rimba who have had their land stolen by oil palm companies are struggling to find food during the pandemic.

A member* of the Orang Rimba group whose members were attacked, told Survival: “The people are always angry with the Orang Rimba here because we collect the oil palm fruits, but we say this is our land, not yours.”

Reports state that company guards attacked the Orang Rimba as they tried to collect oil palm fruit, throwing stones at them. After the Orang Rimba fled, one guard is believed to have rounded up a mob of local villagers, who destroyed eleven Orang Rimba houses and all of their possessions.

Many Orang Rimba have had their forests destroyed by oil palm and timber companies and are now forced to live in plantations. Robbed of their forests, which were rich in food for the nomadic tribe to hunt and gather, they now survive by selling wild boar that they hunt in the plantations and by collecting rubbish from the side of the road. Due to local concerns about the link between Covid-19 and wild meat they are now unable to sell it at local markets, forcing them to rely on selling fruit collected from the plantations in order to survive.

The guards involved in the incident with the Orang Rimba are employed by the PT Sari Aditya Loka plantation from the Astra Group. The group is part of Jardine Matheson, the British conglomerate, owners of the luxury Mandarin Oriental hotel chain. When Survival visited the same Orang Rimba group last year, we were told: "The money to build that big building [Mandarin Oriental hotel in London] has come from our land. I am angry with the company because I’m just here, but they have a huge hotel in another country. My message to people who stay at the hotel is “Give us back our land.”

The destruction of their forest to make way for plantations has been devastating for the Orang Rimba. Trees are at the core of some of the tribe’s most important rituals. When an Orang Rimba child is born, their umbilical cord is buried in the rich soil of the forest, and a Sentubung tree is planted to grow on top. Each individual maintains a sacred bond with that tree for the rest of their life, charting their age as it grows and jealously guarding it from being attacked or felled. As far as the Orang Rimba are concerned, cutting down a birth tree is equivalent to murder.