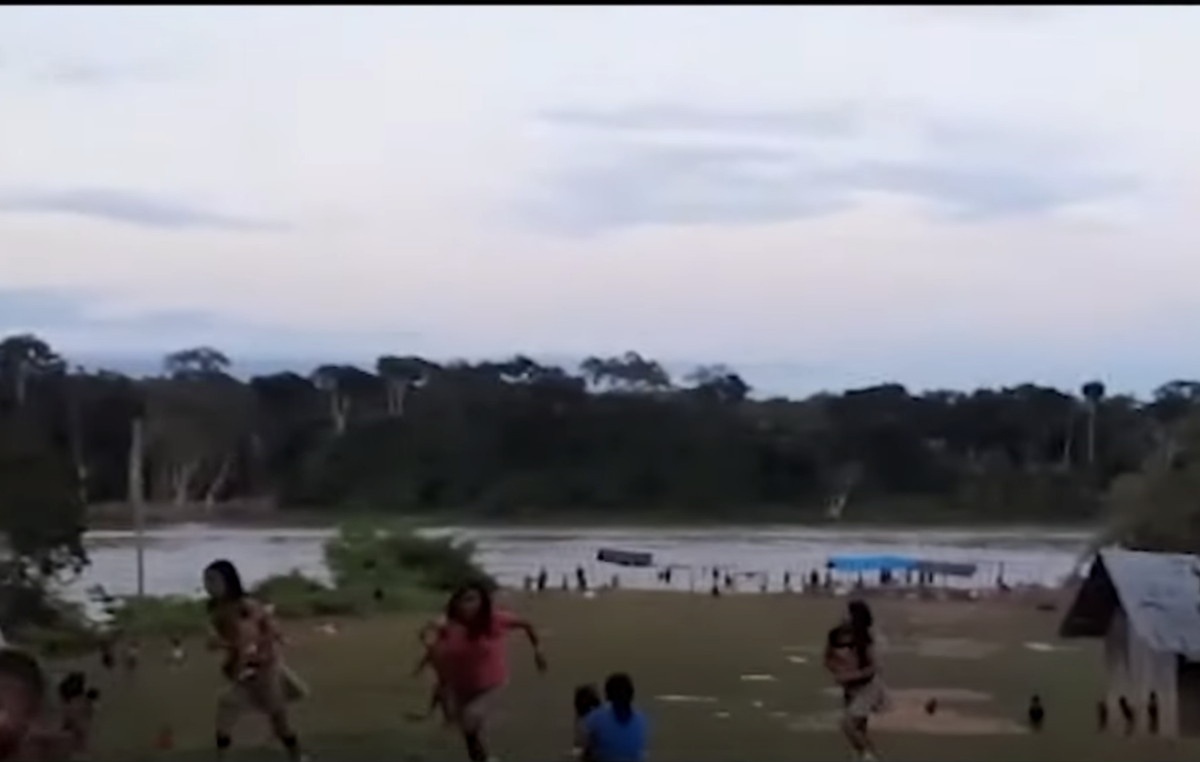 Yanomami people in the community of Palimiú flee as illegal miners open fire at them from a passing boat. © Survival

A major humanitarian crisis is engulfing the Yanomami. In the last few months several communities have been subjected to repeated, violent attacks by heavily armed goldminers who are operating illegally in the Yanomami territory. Following one such attack on Palimiu community, two young children drowned in the river as they tried to escape.

On 5 June a large group of miners entered the community of Maikohipi and set off tear gas canisters, forcing the Yanomami to flee into the forest.

Another community, Walomapi has been under constant attack since 10 May, according to the Indigenous health body, Condisi-YY. The latest there was on 8 June, when miners fired at Yanomami hunters who had to dive into the river to escape.

Junior Hekurari Yanomami, president of Condisi-YY said: “The situation is chaotic… the authorities must act urgently…. and uphold the Brazilian constitution.”

According to Dario Kopenawa, vice-president of Hutukara Yanomami Association: “Every day, the Yanomami are intimidated. There’s a lot of harassment, death threats, shouting, brandishing guns, shooting with tear gas. The authorities have never sent in security forces permanently… The authorities have not complied with our requests [for protection and to remove the miners]. The situation is very tense.”

Uncontacted Yanomami communities are highly vulnerable to attacks and diseases transmitted by the miners, and fears are growing for their safety.

Gold miners have been spotted close to Moxihatatea (uncontacted Yanomami). Above, one of the Moxihatatea communal houses, seen from the air. © Guilherme Gnipper Trevisan/FUNAI/Hutukara

The social and environmental impacts of the invasion are immense: 20,000 miners are polluting the river systems with highly toxic mercury. Several studies have shown that some Yanomami communities in the mining zones have levels of mercury poisoning significantly over the WHO’s recommended limit.

The miners are also destroying the forest – a recent report by Hutukara revealed that 2,400 hectares of forest have been destroyed. In 2020, deforestation increased by 30%.

Yanomami leader and shaman Davi Kopenawa, chairman of Hutukara Yanomami Association said: “You see the dirty water, the yellowish river, pits everywhere. These prospectors are like pigs from big farms—they dig a lot of holes looking for precious stones like gold and diamonds. They eventually come back. Twenty years ago, we managed to send these invaders away, and they returned. They are coming in like starved beasts, looking for the wealth of our land. They are advancing very fast.”

The miners are also spreading malaria and Covid-19. In the past five years cases of malaria have increased by 500%. In 2020 the Indigenous health department registered 20,000 cases of malaria. More than a third of the total Yanomami population may have been exposed to Covid-19, making a lethal combination which is devastating their health and ability to feed themselves. Yanomami children are dying from malaria, pneumonia and malnutrition.

Survival International has worked closely with the Yanomami for 50 years. Our Research Director Fiona Watson, who knows them well, is available for interview: [email protected]

To take action and support the Yanomami: svlint.org/StopMining