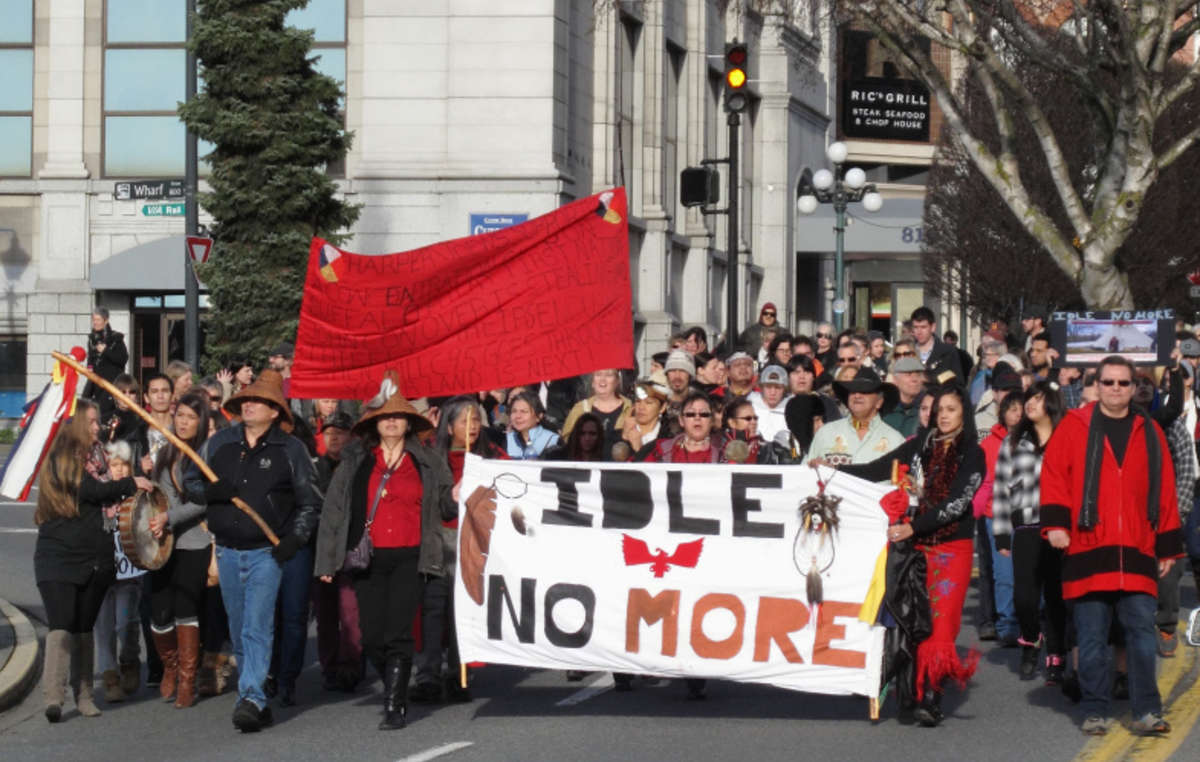 Native people across Canada have blockaded roads, bridges and railway lines as part of the grass-roots indigenous movement Idle No More.

From British Columbia, where dozens of protesters demonstrated outside hearings for a proposed oil pipeline, to Ontario, where border crossings to the USA were blocked, the scale of the protests strongly suggest that the movement is showing little sign of dying down.

The Idle No More movement began in November 2012, when four women from the province of Saskatchewan held a ‘teach-in’ about the likely effects of Bill C-45, a large and complex bill proposed by Prime Minister Stephen Harper, which would seriously weaken many environmental regulations.

On 4 December, a group of chiefs from the Assembly of First Nations (AFN), Canada’s principal indigenous organization, were prevented from entering the Parliament buildings to lobby MPs over the bill. News of the snub, using the Idle No More hashtag, quickly spread across the country.

Another important element of the protests has been a hunger strike by Theresa Spence, chief of the Attawapiskat First Nation in northern Ontario. This Cree community, despite being the location of De Beers’s Victor diamond mine, is riven by social problems, including poor housing and chronically inadequate education provision.

Chief Spence declared that her hunger strike would continue until the Prime Minister and the Governor General (the Queen’s representative in Canada), agreed to meet her to discuss Aboriginal rights.

On January 11 a delegation of First Nations leaders, under the aegis of the AFN, held a meeting with Mr Harper and various other ministers. The Governor General, however, did not attend. The meeting was inconclusive, with the Aboriginal Affairs Minister reporting that ‘it would be followed by high-level dialogue between the Prime Minister and Shawn Atleo’, leader of the AFN.

As described by the native writer Lisa Charleyboy, the objectives of Idle No More are ‘to build indigenous sovereignty, to repair the relationship between indigenous peoples of Canada (First Nations, Métis, and Inuit), the crown, and the government of Canada from a grassroots framework, and to protect the environment for all Canadians to enjoy for generations to come.’

Idle No More has called for a World Day of Action on January 28th.