Enter the world of the shaman with the words of Davi Yanomami, the “Dalai Lama of the Rainforest”, and images taken by Claudia Andujar, winner of the Goethe Medal 2018

The spirit world is a fundamental part of life for the Yanomami tribe of the northern Amazon. Their powerful shamans have many and varied roles as healers, cosmologists, dream tellers and keepers of botanical knowledge. They are guided by spirits (xapiripë) and the wisdom of their ancestors. This article offers a rare glimpse into their world with insights from eminent shaman Davi Yanomami, known as the Dalai Lama of the Rainforest, and pictures by award-winning photographer Claudia Andujar, recipient of the 2018 Goethe Medal.

Davi Yanomami has asked Survival International to tell you that his tribe are in grave danger and urgently need your support. Thousands of violent gold-miners are working illegally in their territory. These invaders are transmitting deadly diseases, contaminating the environment and poisoning the Yanomami. A measles outbreak on the Venezuela – Brazil border is killing members of the tribe. The uncontacted Yanomami are particularly vulnerable to such imported illnesses; disease can quickly kill entire populations. To help the Yanomami and other tribes, please click here. 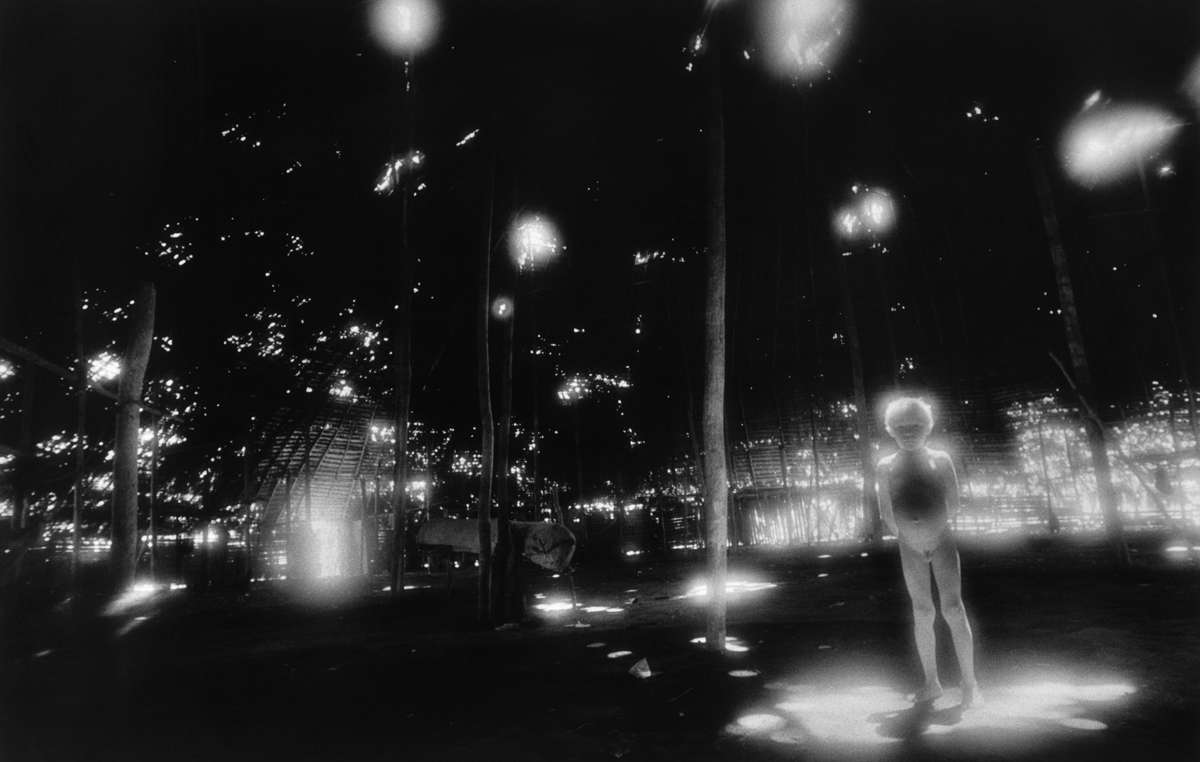 A Yanomami boy in the tribe's communal house, which they call 'yano'. © Claudia Andujar/Survival

Davi first saw xapiripë as a child and continued to see them in his sleep as he grew up. When he became an adult, he asked to be initiated as a shaman.

“We Yanomami learn with the great spirits, the xapiripë. We learn to know the xapiripë, how to see them and listen to them. Only shamans – those who know the xapiripë – can see them, because they look like humans but are tiny as specks of sparkling dust and bright like light. Their songs are powerful, and their thinking is straight.” 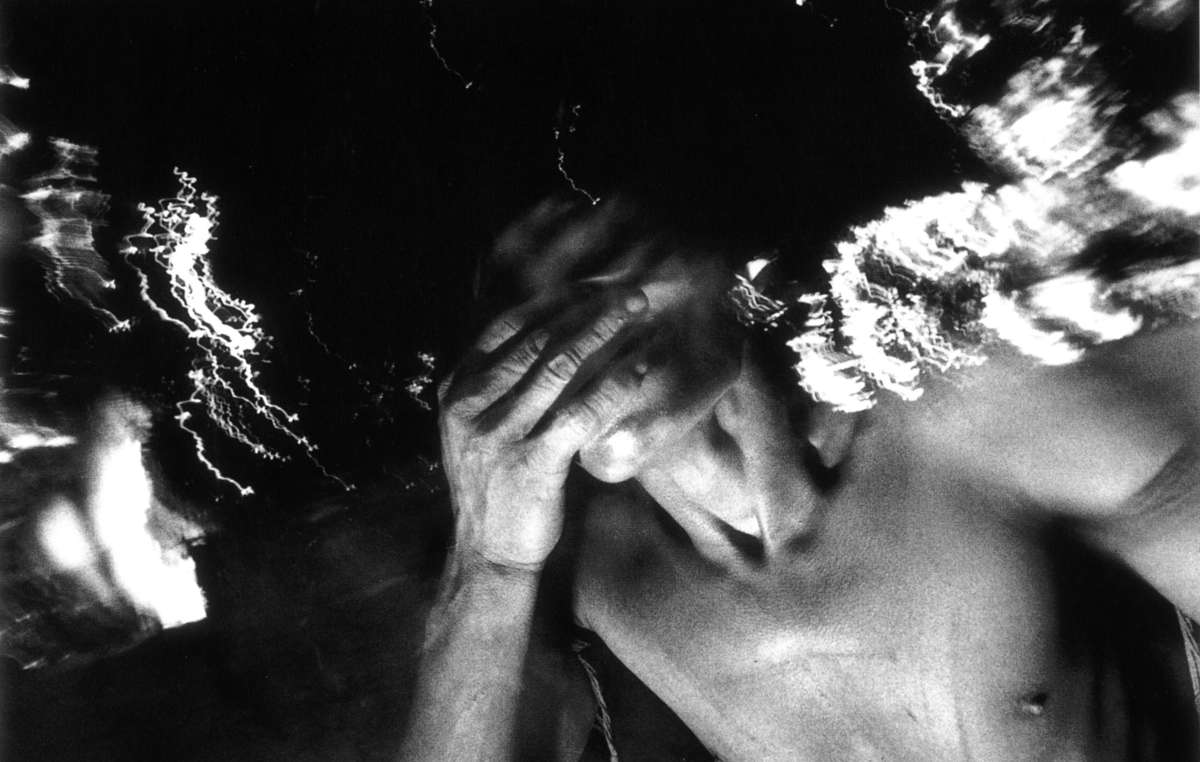 Yanomami shamans inhale the yakoana powder, extracted from the bark of the virola tree, in order to enter a dream state. The powder is administered through a long horoma tube, traditionally made from the hollowed stem of a palm tree. © Claudia Andujar/Survival

Through dreams and trances, Yanomami shamans transcend the physical confines of their bodies and the limits of the human consciousness to commune with the xapiripë.

“When for the first time you sniff the powder produced from the yakoana tree, xapiripë spirits begin to gather around you. First, you hear from afar their chants of happiness, faint as the hum of mosquitoes. Then you begin to see scintillating lights trembling up high, coming from every direction in the sky. Gradually the spirits reveal themselves, advancing and retreating with very slow steps.” 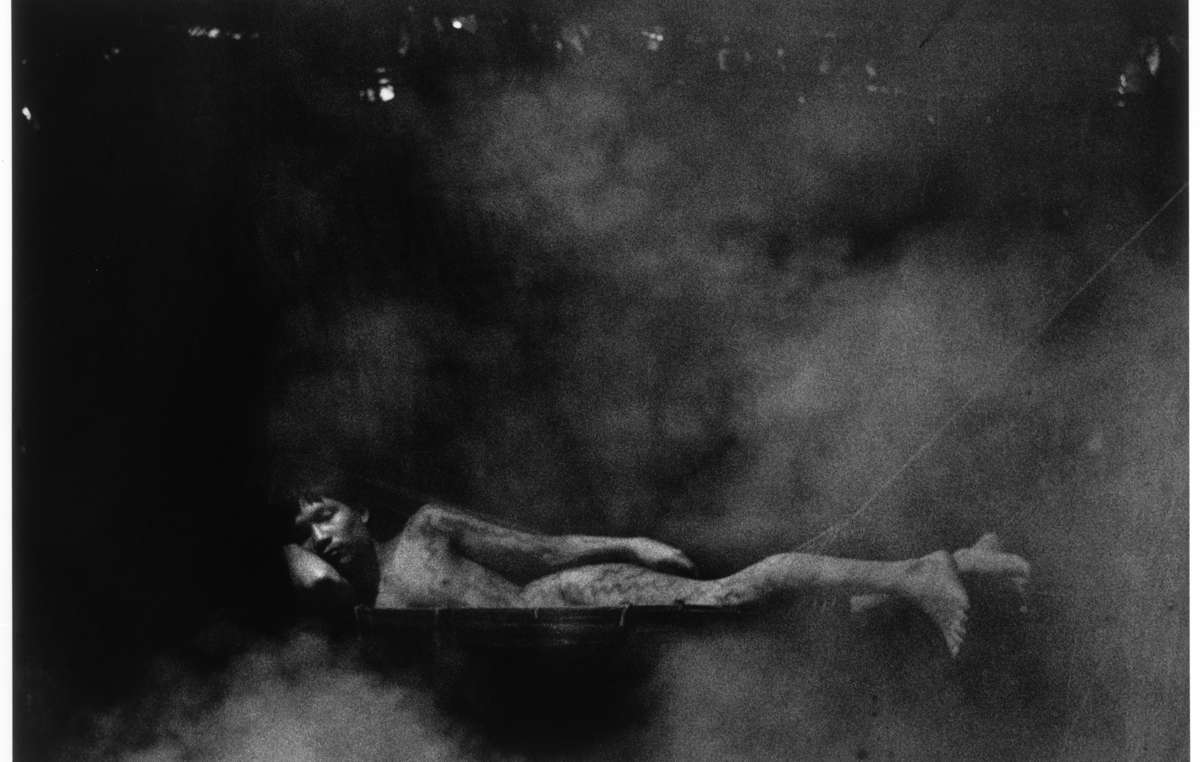 Yanomami shamans inhale the yakoana powder in order to enter a dream state. The powder is adminstered through a long horoma tube, traditionally made from the hollowed stem of a palm tree.

“This is how we make the spirits dance. There are many, many xapiripë, not just a few, but thousands, like stars. Some live in the sky, some live under the ground and others live in the high mountains which are full of forests and flowers. We call these sacred places ‘hutu pata’. When the sun is high in the sky, the xapiripë sleep. At dusk, they begin to appear. When we are sleeping, they are dancing.” 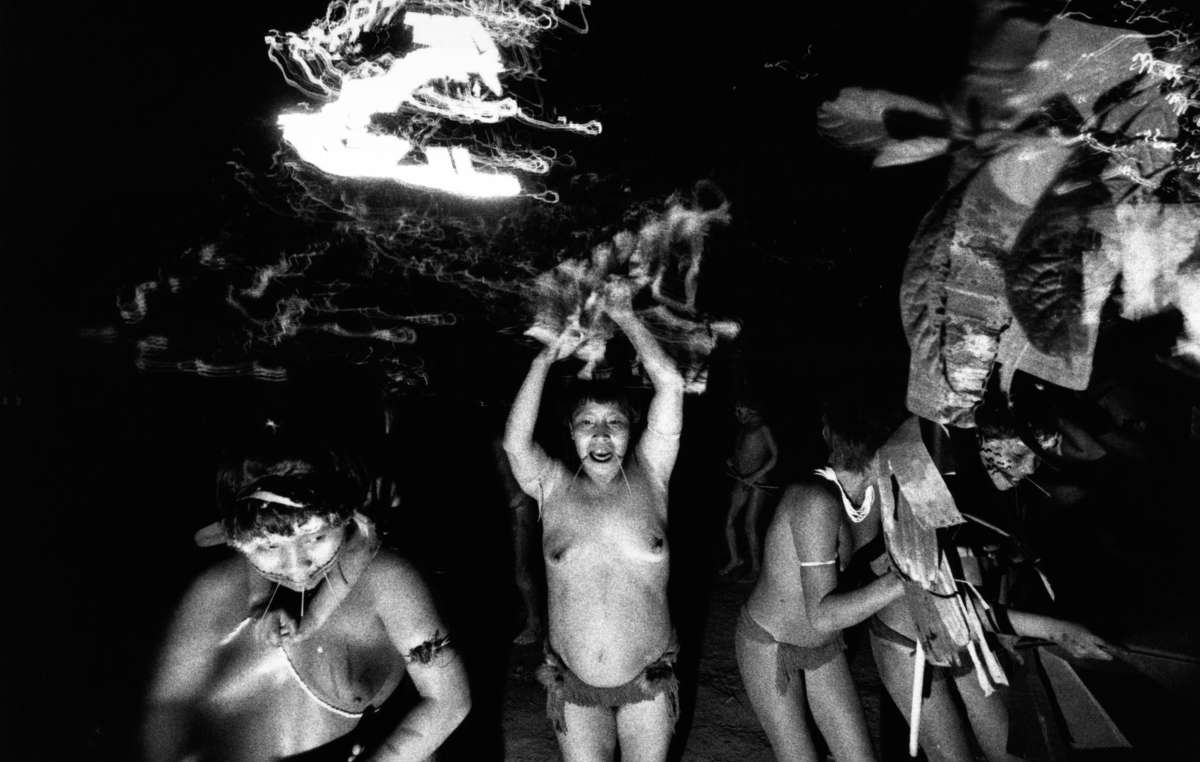 Yanomami women dancing. The spirit world is a fundamental part of Yanomami life. Every creature, rock, tree and mountain has a spirit. Sometimes these are malevolent, attack the Yanomami and are believed to cause illness. Shamans control these spirits by inhaling a hallucinogenic snuff called yakoana. © Claudia Andujar/Survival

“One by one the spirits arrived. The toucan spirits arrived with their big ear sticks and bright red loin cloths. The hummingbird people arrived and flew around. The moka frog spirits were there with quivers of arrows on their backs. Then came the peccary spirits, the bat people and the spirits of the waterfall. My soul began to shine. All came and slung their hammocks in my chest.” 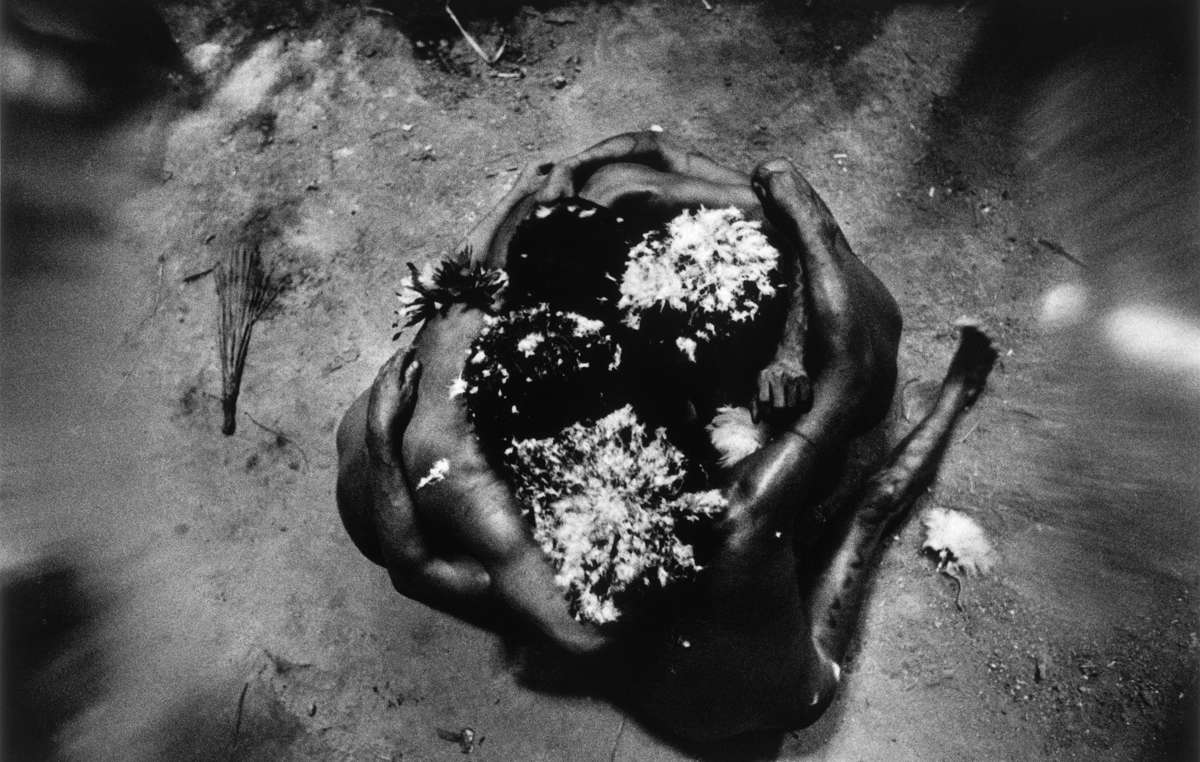 Yanomami shamans control the spirits of the forest by inhaling a hallucinogenic snuff called yakoana. Through their trance-like visions, they meet the spirits or xapiripë. © Claudia Andujar/Survival

“The xapiripë have danced for shamans since the very beginning of time, and they continue to dance today. Their heads are covered with white hawk down, and they wear black bands made of monkey tails and turquoise cotinga feathers in their ears. They dance in a circle, unhurriedly.” 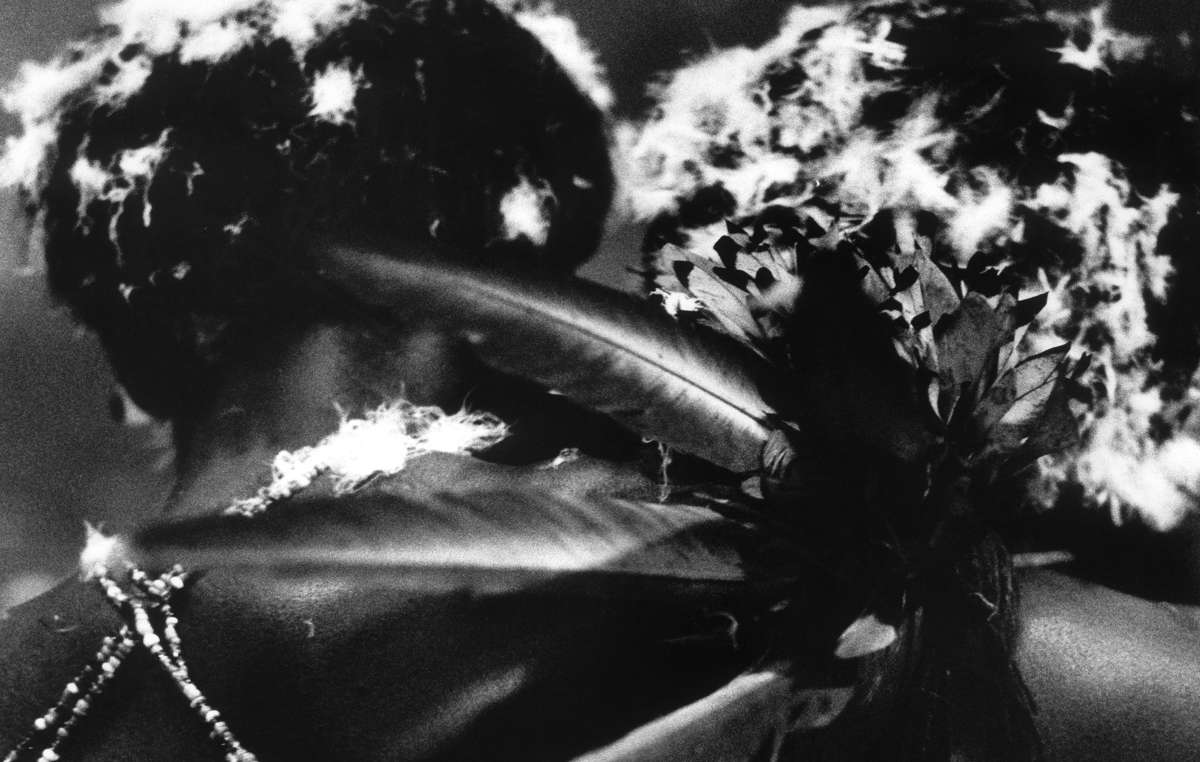 Two Yanomami shaman wearing feathers from the king vulture. Shamans control the spirits by inhaling a hallucinogenic snuff called yakoana. Through their trance like visions, they meet the spirits. © Claudia Andujar/Survival

“The xapiripë descend to us on threads as fine as a spider’s web. They are beautiful, painted with bright colours and urucum (annatto). Their armlets are decorated with macaw and parrot feathers. They dance very beautifully and sing differently. There are different songs: the song of the macaw, of the parrot, of the tapir, of the tortoise and of the eagle. 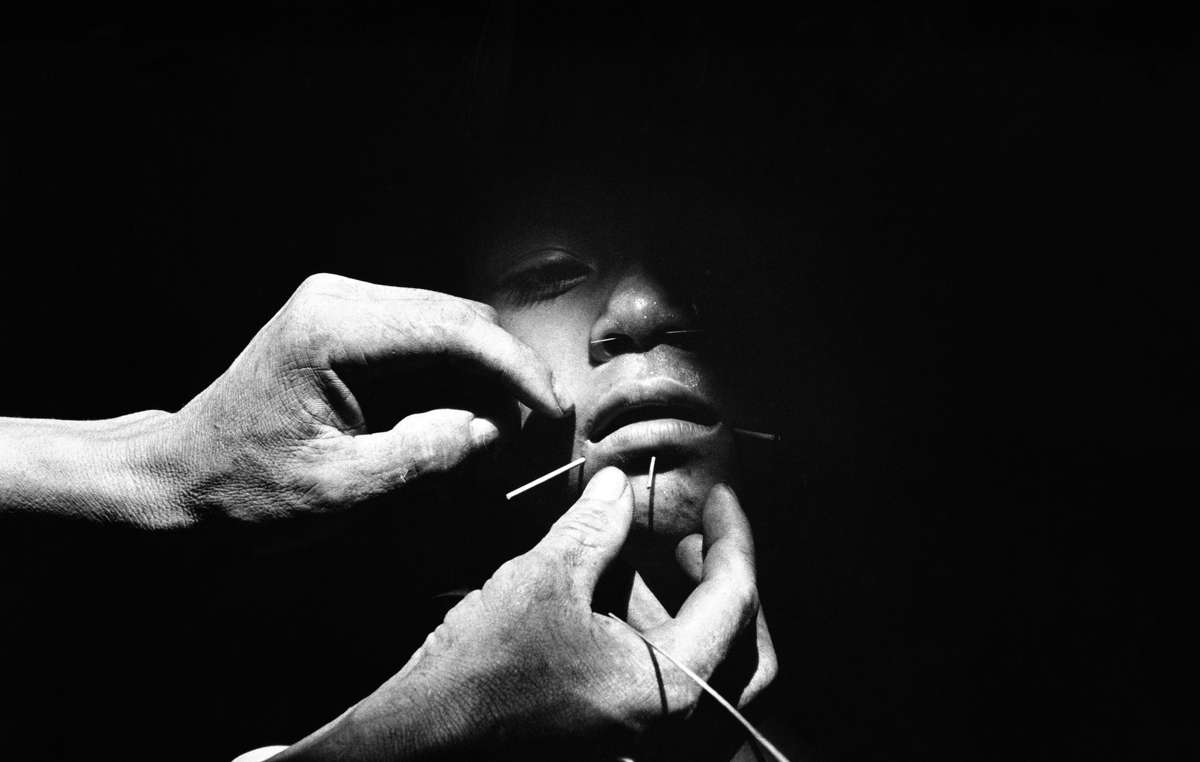 A Yanomami woman having her face decorated. © Claudia Andujar/Survival

Yanomami shamans also enlist the help of xapiripë to cure human illnesses. Diagnosing and detecting diseases takes years of shamanistic experience. They also use different medicinal plants to treat fevers, stomach-aches, muscular pains and other ailments. In general, every ailment has its cure, except for diseases that have been brought in by outsiders, to which the Yanomami have little immunity.

“If the xapiripë didn’t exist, we would no longer be alive. The evil spirits would have devoured us long ago. They know about the illnesses that afflict us. They throw the disease far away, into the underworld. And so they cure us.”

By communing with and controlling the xapiripë, the Yanomami shamans are not only protecting their own community, but looking after the rest of the world as well. Davi believes that many powerful shamans are needed to control the planet.


We, the shamans, also work for you, the whites, he says. Our shamans know that our planet is changing. We know the health of the Amazon. We know that it is dangerous to abuse nature, and that when you destroy the rainforest, you cut the arteries of the future and the world’s force just ebbs away. The sky is full of smoke because our rainforest is being logged and burnt. The rains come late, the sun behaves in a strange way. The lungs of the sky are polluted. The world is ill. The forest will die if it is destroyed by the whites. Where will we go when we have destroyed our world? When the planet is silent, how will we learn?"

Survival International is working tirelessly to help protect Yanomami land so they can live freely and as they choose. We helped secure the Yanomami Park in 1992, which along with the Yanonmami’s land in Venezuela remains the largest area of forest under Indigenous control anywhere in the world. We urgently need your help to defend this region from loggers, miners and others who seek to exploit the Yanomami and their resources and bring violence, disease and destruction to the tribe. The global movement for tribal peoples is growing, you can join us now: https://www.survivalinternational.org/donate