A version of this article appeared in Counterpunch on January 24, 2020 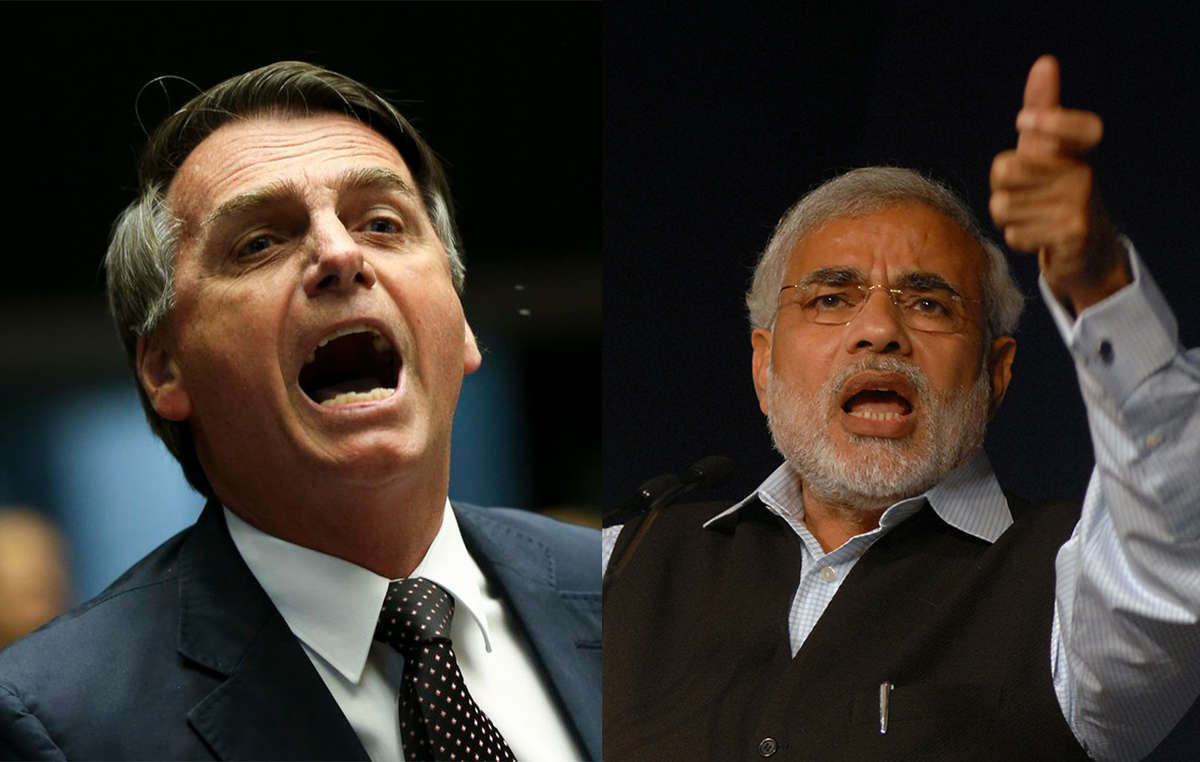 A man who has repeatedly romanticized dictatorship and advocated the use of torture seems like an odd choice for guest of honor at the annual celebration of the constitution in the biggest democracy in the world. However, it makes perfect sense that Brazil’s notorious President, Jair Bolsonaro, has been invited to India’s Republic Day parade by Prime Minister Narendra Modi.
Authoritarian nationalism is on the rise across the globe and anti-democratic leaders are now at the helm of the world’s biggest democracies, including India and Brazil, as well, of course, as the USA. This is bad news for everyone, but minorities are particularly at risk as these demagogues claim that “their” rights must be sacrificed for the national good. Bolsonaro and Modi have already taken several significant strides down this dangerous path.
While Bolsonaro’s war against Brazil’s indigenous peoples has been covered extensively by the international press and received a great deal of attention on social media, far less noise has been made about what’s happening to the forest-dwelling people of India. India is home to more tribal people than any other country on Earth: Out of the estimated 370 million indigenous and tribal people worldwide, over 100 million live there.
There is growing national and international concern about the impact on Muslims of India’s Citizenship Amendment Act (CAA) and National Register of Citizens (NRC), but this legislation is catastrophic for tribal communities too.  According to tribal activist and writer Gladson Dungdung:
“Adivasis [tribal people] will be denied their citizenship, detained in the detention camps and intruders will be rehabilitated in their land and territories. This is unacceptable. Adivasis are first settlers of the country, they must be kept out of the CAA/NRC and their land, territories and resources must be protected.”

Land theft is a core element of the existential threat facing indigenous and tribal people at the mercy of dominant societies worldwide. In recent years, this threat has accelerated in both India and Brazil as Modi and Bolsonaro’s administrations pursue populist, majoritarian agendas that entail commandeering indigenous land and resources “for the good of the nation.” 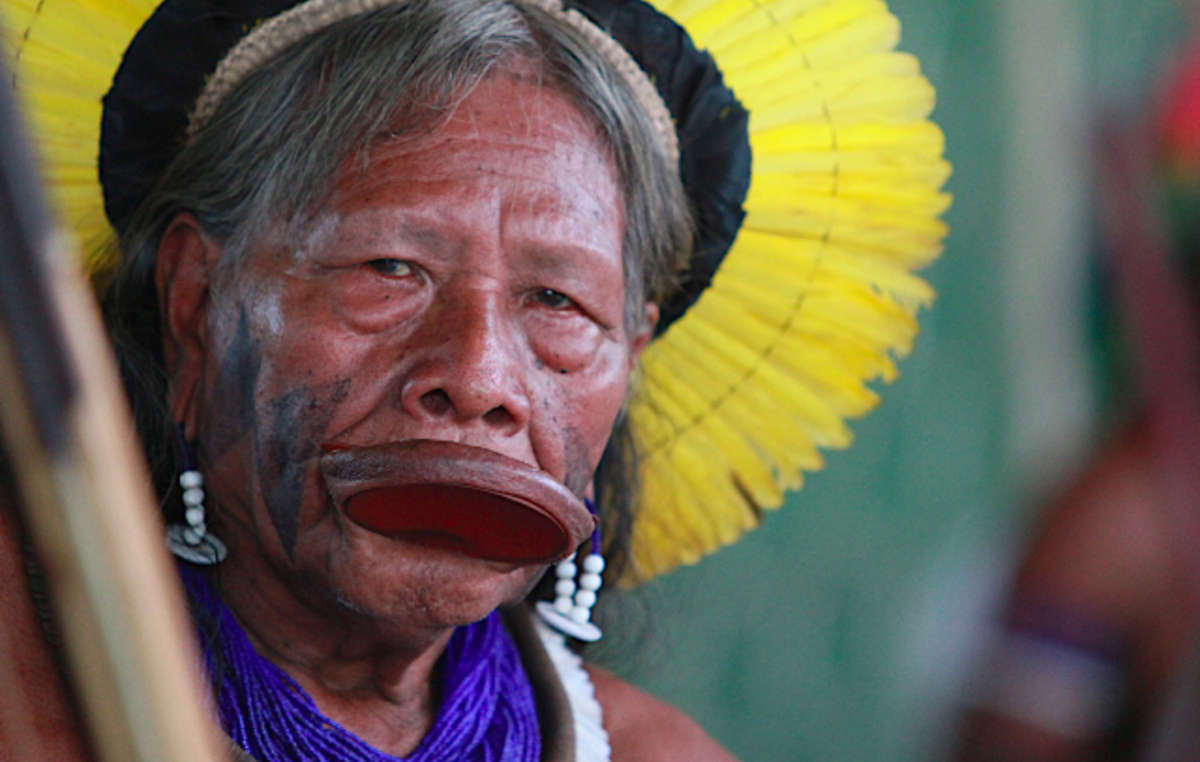 Last week, Kayapo chief and activist Raoni Metuktire convened a meeting of Brazilian indigenous peoples “with the goal of coming together and denouncing that a political project by the Brazilian government of genocide, ethnocide and ecocide is underway.” This meeting was partly in response to Bolsonaro’s latest attack: proposed new legislation to open up indigenous reserves for resource extraction, such as mining for gold and oil, and economic activities like agriculture and tourism. If the bill passes, indigenous communities will have no power to veto such projects.

State-sanctioned land theft is occurring in India on an almost unfathomable scale. There are up to 8 million forest-dwelling people currently facing eviction from their land; a number roughly equivalent to the population of New York. This is the result of the government’s gross mishandling of a court case that challenged the Forest Rights Act (FRA), legislation which guarantees the rights of people living in India’s forests. Demonstrating its contempt for the people concerned, the Indian government’s Ministry of Tribal Affairs didn’t even turn up at court hearings to defend its own law.
The outcry against this exceptionally flawed decision has led to the eviction order being suspended – for now. The next Supreme Court hearing on the case will take place imminently. V.S. Roy David of the National Adivasi Alliance (NAA), a group representing tribal peoples in India, has said: “We unequivocally appeal to the Supreme Court to re-evaluate this retrograde anti-people order which will throw millions of Adivasis and other traditional Forest Dwellers into the streets.”
Survival International has campaigned for decades for the rights of forest-dwelling tribes in India. It highlights the catastrophic outcomes of previous evictions, such as that of the Chenchu people from Pecheru village, evicted in the 1980s in the name of conservation. Chenchu survivors report that of the 750 families that used to live in the village, just 160 families survived after the eviction took place. Many starved to death.
Resistance, from people like Chief Raoni, V.S. Roy David, Gladson Dungdung and their domestic and international allies, has already proved powerful and effective. The Bolsonaro and Modi regimes have both proposed laws to erode protections and provisions for indigenous and tribal peoples, but the protests that followed forced the administrations to abandon these proposals, at least for now. 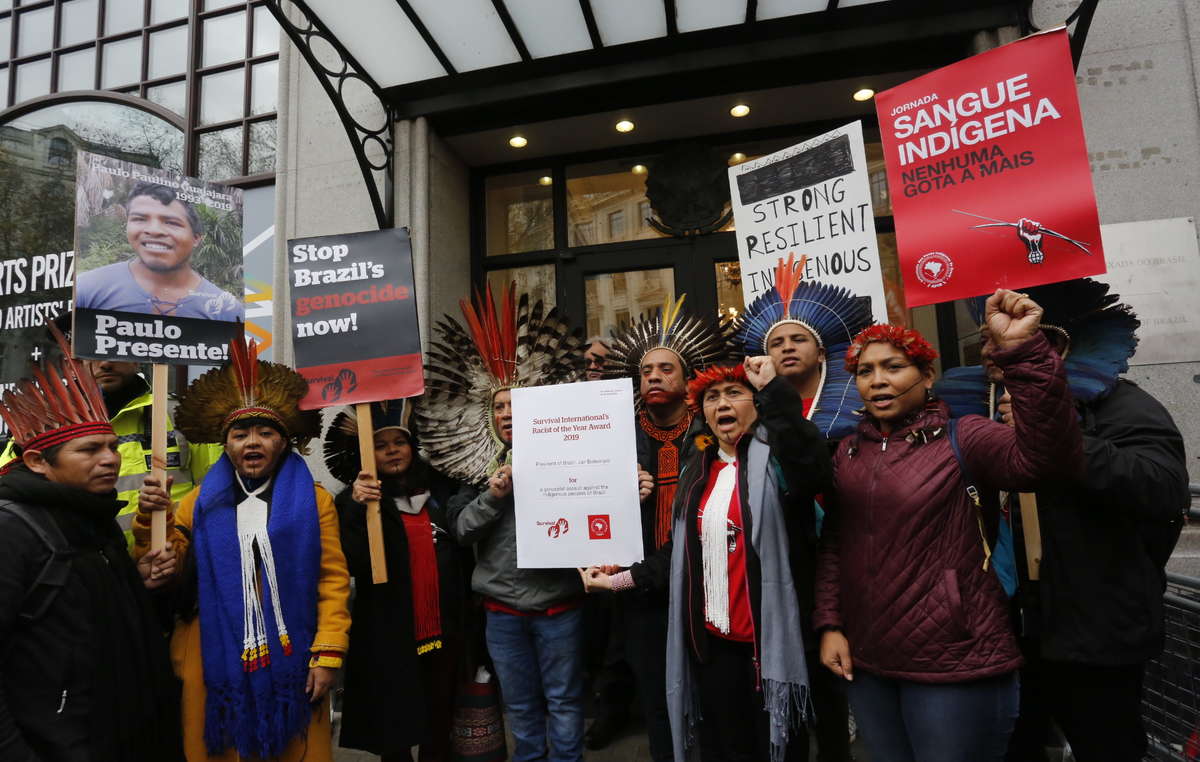 In 2019, a secret draft amendment to India’s colonial forest law was leaked to the press. It allowed forest guards to shoot tribal people, to issue communal punishments, to seize property and arrest citizens with impunity. It also allowed authorities to extinguish rights provided under the FRA and hand over forest land to private companies. Eight months after it was leaked, following national and international protests, the Indian government withdrew the proposed changes to the law although many fear it will be brought back in another guise.
The Bolsonaro regime proposed to end the indigenous healthcare system, SESAI, a decentralized care model with 34 Special Indigenous Health Districts, run in collaboration with local communities and tailored to their needs. Indigenous people saw the dissolution of SESAI as a direct threat to their lives, and especially the lives of their children and elderly. The proposal sparked outrage and protest among indigenous peoples all over the country. From Paraná to Rondônia, from Pernambuco to Mato Grosso do Sul, indigenous groups occupied public buildings and highways in support of SESAI. The Minister backed down and made assurances that the programme would not be abolished, only a week or so after the proposition was first floated.
Brazil and India are states founded on and distinguished by diversity. Both have provisions to protect the rights of their indigenous and tribal citizens enshrined in their constitutions. Anyone who believes in constitutional democracy must stand in alliance with the indigenous and tribal people of India and Brazil: for tribes, for nature, for all humanity.