“Midway upon the journey of our life I found myself within a forest dark, For the straightforward pathway had been lost.” Like every Italian, I’d had these lines from Dante’s Inferno drummed into me as a child without ever really understanding them. Here, deep in the Congolese rainforest, suddenly everything made sense: forests truly could be infernal places.

Huge trees, with their psychedelic-green leaves hide the sky above me. A suffocating humidity makes it hard to breathe. As I focus on the uncanny sound of insects and other unfamiliar animals lurking in the undergrowth, mosquitoes prey on every single part of my body that I haven’t managed to cover.

The Baka, one of the Congo Basin peoples formerly known as “Pygmies”, stride on ahead, while I lag behind, tripping up every five seconds in an effort to keep up with them. The odd pitying look in my direction lets me know that they are going as slowly as possible just for me. They stop to point towards something in the jungle that I can’t identify: a gorilla has just passed by. I freeze, paralyzed with fear, while they smile.

I am in the Messok Dja rainforest, northwest Congo, an area known for its gorillas, elephants and chimpanzees. As a biodiversity hotspot, it has attracted the attention of WWF. The biggest conservationist organization in the world has decided to push for it to be turned into a national park. The problem is that WWF has no mandate to do so, as this land belongs to tribal people.

According to a WWF report, the project will affect 48 communities of Baka and their Bakwele neighbors. All depend on Messok Dja forest to survive. It is not only a question of livelihood though. This rainforest also provides the Baka with natural medicine and contains sacred areas where their ancestors used to reside. 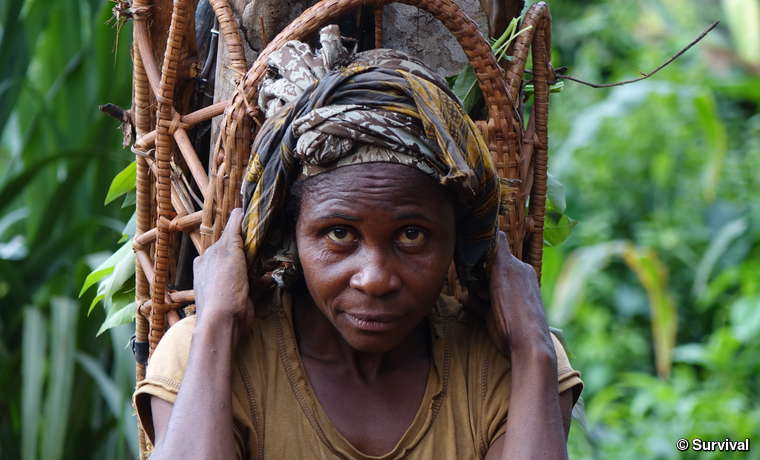 Despite their close relationship with their surrounding environment, the Baka I talk to feel that the forest is now off limits to them. This has been the case since 2008, when WWF decided to set up a field base headquarters in Sembe, a town very close to the proposed new park.

Since then, and notwithstanding the fact that Messok Dja is not even officially a national park yet, the rangers have sown terror among the Baka in the region. Rangers have stolen the Baka’s possessions, burnt their camps and clothes and even hit and tortured them. If Baka are found hunting small animals to feed their families they are arrested and beaten.

Fear of park-ranger violence has led many Baka to abandon their traditional hunting expeditions (called molongo), which used to keep them in the depths of the Messok Dja forest for months. These forest trips are for Baka much more than we think and are fundamental for community identity: Young Baka learn values and skills and are taught the history of their tribe through stories and songs.

Although, like all hunter-gatherers, the Baka depend on a much wider area for their livelihood, they now spend much of their time in permanent forest camps along the road. Their villages have become, as they say, a prison. “The WWF has ruined the forest. There were many important things for us in there. The forest needs us and we need the forest. But now we go inside as if we were thieves and they hit us with their machetes when we do it.” Isn’t it paradoxical that the legitimate inhabitants of this forest are forced to feel like thieves when their land is being stolen in the name of conservation?

And they call it consent?

The theft of tribal lands is illegal. National and international law, not to mention WWF’s own policy, state that tribal peoples must be consulted and their free, prior and informed consent obtained for any project undertaken on their land. Regardless of whatever WWF’s claims are about this, all the Baka I’ve met have a clear opinion: “They never asked for our opinion, they just gave us an order: ‘this is the park and you won’t be allowed to enter.’”

It seems that some local Congolese human rights NGOs have refused to be involved in the project, unconvinced that consent has been obtained. A source that prefers to remain anonymous told us: “WWF called me to help them let the local population know about Messok Dja but the process of creating it had already started. This is why I refused to help — we cannot decide how the communities should be protecting their territories nor what kind of protected area (a park, a reserve, etc) is best for them — only the communities themselves can decide that. The entire process is illegal.”

In any case, it became clear to me during my time with the Baka that they were in no position to consent to anything. They live in fear of park rangers and more particularly the WWF: the Baka word for park ranger is “dobidobi” (an abbreviated form of WWF). For so long as this is the case, the Baka could never give ‘free’ consent to a project which has the involvement of WWF.

“WWF is aware of this problem”, a report notes, “The communities associate ETIC [the wider conservation project that includes Messok Dja National Park] and WWF with ecoguards and therefore with the repression of (big) poaching (which unfortunately is a huge problem that the sector is facing). As a result, many community members, particularly tribal people, have been hesitant to participate in the meetings. Many communities have also refrained from disclosing their areas of real activity out of distrust.”

Despite this knowledge, WWF is proceeding with the project, thanks to funds and support from the European Commission, WWF Netherlands, the Global Environment Facility and UNDP, among others.

In a village very close to the park, I am woken up by the sound of trucks transporting timber. For the Baka, this deafening coming and going is yet further humiliation. While they, the people who have nurtured and protected the forest for generations, are being evicted to make room for a park, the logging companies continue to destroy their lands undeterred, often acting in partnership with the big conservation organizations.

“The Baka protect nature. We enter the forest to get meat, sweet potatoes, and vegetables to eat, not to sell it. We don’t have machines that can cut down trees. We climb on the trees to collect honey but we don’t hurt them. The logging companies are taking all the trees away, destroying everything.”

Targeting tribal people like the Baka has diverted attention away from the true causes of environmental destruction: logging, criminals colluding with corrupt officials (who lead poaching networks), and western consumerism. For the local population the link between corruption and poaching is very clear.

As a Bakwele tells Survival: “A soldier asked my brother to bring elephant’s body parts to Brazzaville. When we arrived at the barrier where the ecoguards were, they let the soldier pass while they tried to arrest my brother who was only the driver. He ran away out of fear and was chased down by the ecoguards, who punished him with ten lashes.”

This kind of behavior also alienates them from conservation efforts, turning a natural ally into an enemy and jeopardizing attempts to protect the environment. It is hard to see how the park will ever work without the Baka’s support.

Putting too much power and weapons into the hand of a group of ill-trained and poorly paid rangers is not the solution; it simply creates a circle of impunity. Rangers are inevitably drawn towards the infinitely more lucrative wildlife crime while their power and guns prevent them from being punished.

In Congo, I asked myself how on earth conservation efforts had got into this mess. How was it that a model of conservation had been adopted which had resulted in human rights violations; had made a people whose lives depend on the forest an enemy of conservation, and had failed miserably to target the real culprits of environmental destruction. I began to think about the disturbing similarities between this type of conservation and colonialist practices.

As colonialists did before them, conservationists presume to know better than local people. They seem to be convinced that tribal peoples’ deep understanding of how to protect the environment is inferior to their own, and they dismiss centuries-old practices as backwards, primitive and even damaging.

But the analogy does not stop here. When they are beaten by park rangers, the Baka use the verb ‘chicotter’. The word derives from the Portuguese ‘chicote’, a heavy leather whip used by French and Portuguese colonialists across Africa to beat the local population. It seems that in this part of the world at least, colonial violence continues to this day, in all but name. And it’s not only physical violence.

The psychological violence the Baka endure is equally reminiscent of Africa’s colonial past: “They see the Baka as animals, not as people. When they see us they only see Pygmies, thinking that we know nothing and that they can hit us when they want”, a Baka tells me. Comparisons between tribal peoples and animals like this make uncomfortable and shocking reading for 2018. It screams of a colonialist rhetoric which we like to think we have left well behind.

But the more uncomfortable truth is, we haven’t. Despite its good intentions, colonialist mentalities seem alive and well within the conservation movement. Colonialism has been, and is, many things but it represents one thing especially: the conviction that a group of humans is superior to another and that anything is allowed: physical violence, humiliation, death. Whether this is to impose a park, a religion or a nationality does not matter: the core ideology and its consequences are always the same.

As we walk across the forest, the Baka, showing no sign of sweat, stop occasionally to show me different things in the forest. No tree, fruit, plant or flower goes unnoticed. Each contains a hidden message which only the Baka understand and which my western senses prove lamentably ill-equipped to decipher.

It is the tribal peoples that are the best conservationists and guardians of the natural world. Their knowledge of the forest is so vast that even a team supported by WWF had to ask for their help in collecting the GPS coordinates of the most important sites of Messok Dja to establish the park’s borders. The Baka accompanied them in the forest in the same way they are now accompanying me, unaware that those coordinates would one day become their prison.

A tall Baka man with bright eyes shows me a sticky grey substance that he has just obtained from a tree: “Here is the forest’s lighter”, he tells me. It’s the resin of the Paka tree, that lights easily when hit by a spark. I look at him surprised, embarrassed at my ignorance, and my inability to survive five minutes without electricity and google instructions.

I realize how much we need the Baka’s knowledge to preserve the planet and humanity’s future, and how important it is to fight for a model of conservation that respects tribal peoples’ rights, something which Survival International has been advocating for years.

The Baka stand ready to fight, both for their own sake and that of the greater good: “We cannot accept the park. It’s useless. Everything is there: food, life, health, all of this you can find in the forest. If we give it away it would be a sacrifice, we would be sacrificing the lives of our children, of our parents, of ourselves — it would be like committing suicide.” It would be a sacrifice for us too: we would lose tribal peoples, the environment and perhaps also our humanity.