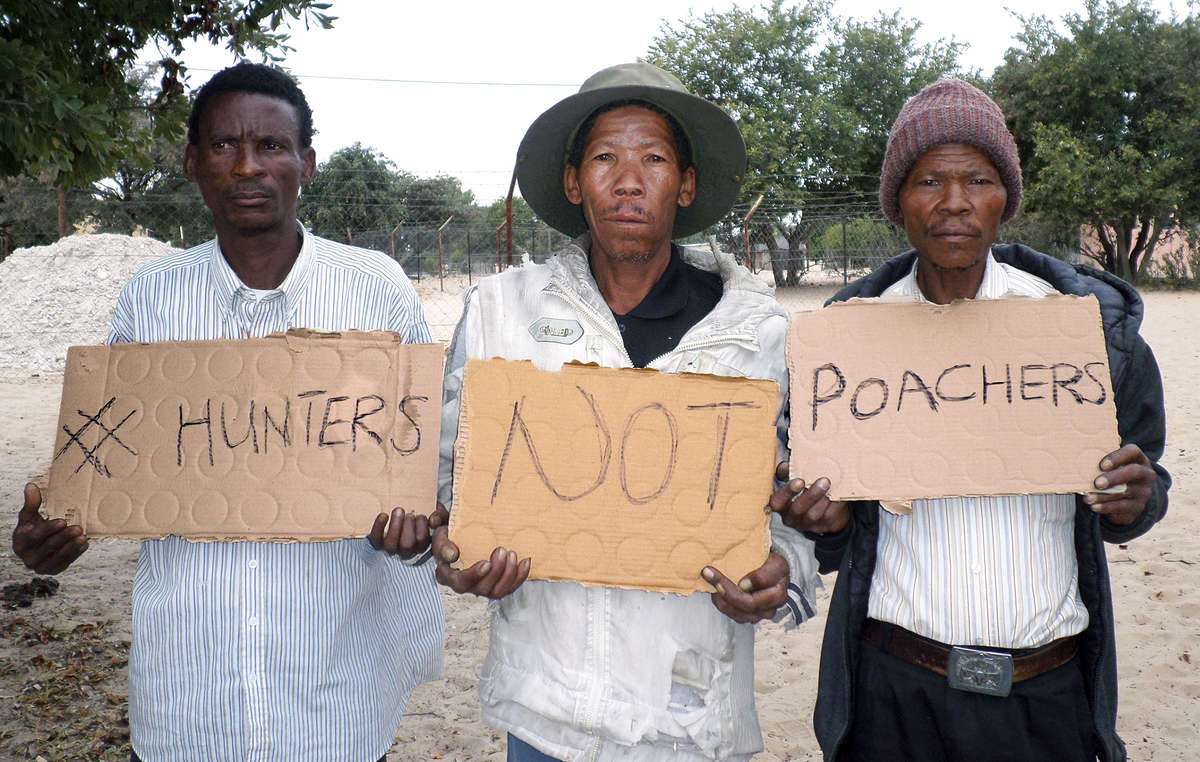 Bushmen hunt for their survival, but are treated like poachers on their land. #HuntersNotPoachers © Survival International

Africa’s last hunting Bushmen have given formal notice of their intention to sue the Botswana government over its “unlawful and unconstitutional” attempts to starve them off their ancestral land in the Central Kalahari Game Reserve.

The Bushmen rely on subsistence hunting to feed their families but face harassment, torture and arrest when found hunting for survival. Earlier this year, the Botswana government issued a nationwide ban on hunting without notifying the Kalahari Bushmen or offering any compensation.

This is the fourth time the Bushmen have been forced to resort to legal action against the government in their desperate wish to live in peace on their land. In a landmark victory in 2006, Botswana’s High Court ruled that the Bushmen have the right to live, and hunt, in the Central Kalahari Game Reserve.

Despite the High Court ruling, not a single hunting license has been issued to the Bushmen living inside the Central Kalahari Game Reserve. Ironically, wealthy trophy hunters are exempt from the ban and continue to legally hunt giraffes and zebras on private ranches.

The Bushmen have hunted game sustainably for many generations, and pose no threat to the survival of wildlife in the Central Kalahari Game Reserve. © Philippe Clotuche/Survival

Bushman Roy Sesana told the Botswana Sunday Standard, "President Ian Khama and his brother Tshekedi [Minister of Environment, Wildlife and Tourism] decided to ban hunting without consulting us. It was a calculated move to starve us out of CKGR [Central Kalahari Game Reserve]. They know that we are dependent on hunting and they decided to ban hunting in CKGR.”

President Ian Khama, who sits on the board of Conservation International, claims the move is to protect the diminishing wildlife numbers in Botswana.

But tribal peoples like the Bushmen are better at looking after their environment than anyone else. They are the best conservationists of their lands, and the Bushmen’s methods of subsistence hunting with spears, bows and arrows pose no threat to the wildlife of the Central Kalahari Game Reserve.

Earlier this year, Bushman spokesperson Jumanda Gakelebone traveled to London to ask for Prince Charles’s support against the hunting ban.

The Prince of Wales has backed a new anti-poaching campaign by United for Wildlife, a coalition of conservation organizations including WWF, Conservation International and The Nature Conservancy, and supported by President Khama.

Many large conservation organizations fail to distinguish between illegal poachers and tribal peoples hunting for their livelihood – tribesmen are accused of “poaching” because they hunt their food. And they face arrest and beatings, torture and death, while fee-paying big game hunters are encouraged.

The government continues to harass and persecute the Bushmen and last year even barred the Bushmen’s long-standing lawyer Gordon Bennett from entering the country to represent his clients. Bennett successfully led three cases for the Bushmen against the government.

Stephen Corry, Director of Survival International, the global movement for tribal peoples’ rights, said today, "Tribesmen the world over are being accused of “poaching” because they hunt their food. They face arrest and beatings, torture and death, while fee-paying big game hunters are encouraged. It’s time we recognized that tribal peoples are the best conservationists. Until then, Survival International will continue to fight these abuses, and highlight the fact that tribal peoples’ lives and lands are being destroyed by the conservation industry, tourism and big business."

- The notice was served by the Bushmen’s lawyers on the Attorney General on August 8, 2014.