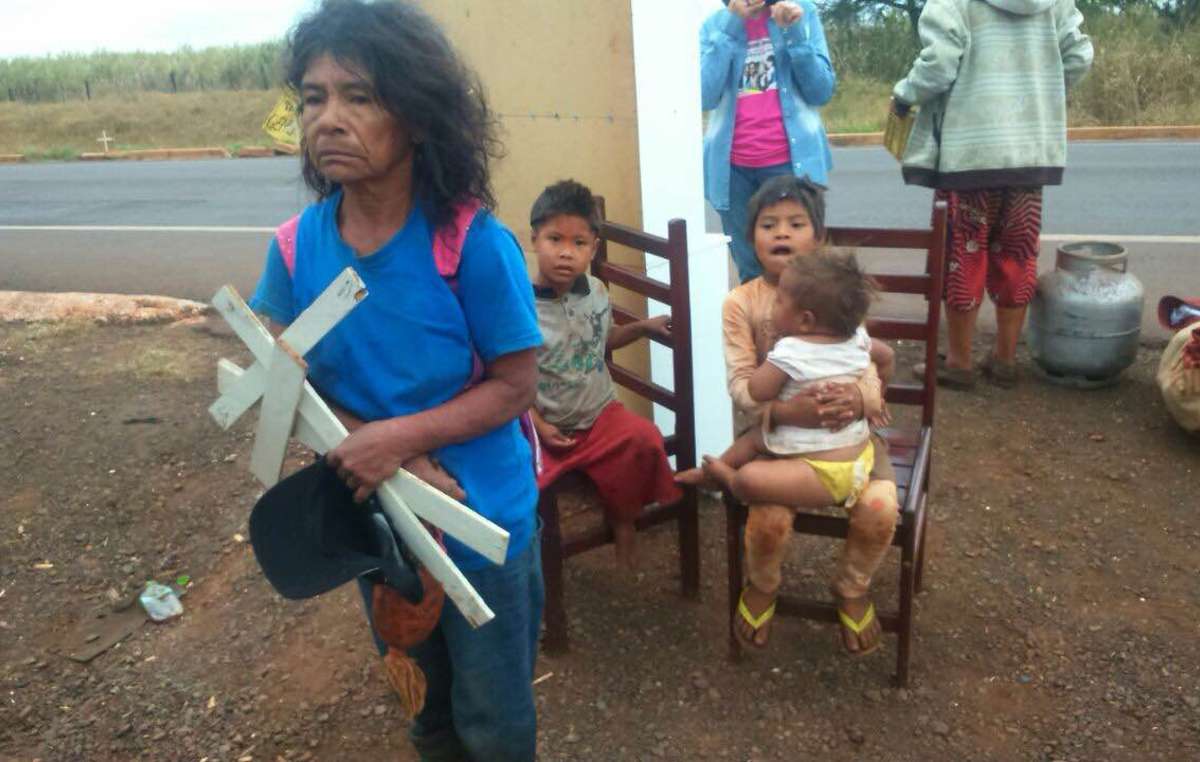 A video showing a tribal community’s homes being bulldozed, condemning families to live by the side of a major highway, has caused outrage in Brazil.

The Indians had been forced to live by the side of a highway for ten years, during which eight people were run over and killed, and another died from pesticide poisoning.

In 2013 the community re-occupied a small patch of their ancestral land. They have now been evicted from it again, after a judge granted the landowner’s request for an eviction order, despite having received appeals from the Guarani, from their allies in Brazil, and from thousands of Survival supporters around the world.

The Guarani of Apy Ka’y are now back on the side of the highway.

Another video shows armed police overseeing the eviction of the nine Guarani Kaiowá families. Tribal leader Damiana Cavanha is shown denouncing the eviction, insisting on her people’s right to defend their lives, protect their lands and determine their own futures.

Around 100 federal and military police evicted the Apy Ka’y Guarani community, whose ancestral lands have been destroyed for industrial-scale farming. © Aty Guasu

She said: “We do not accept this. I will stay here, this is my right. We have our rights. It’s not only the white people that have rights, the Guarani Kaiowá and the Indigenous peoples also have rights. So many of us have died, so many people have been killed by the gunmen… Let us stay here, we have our Tekoha [ancestral land] and I will return to my Tekoha.”

In June 2016, ranchers’ gunmen attacked another Guarani community at Tey’i Jusu. One man was killed and several others, including a twelve year old boy, severely injured.

Most of the Guarani’s land has been stolen from them. Brazil’s agri-business industry has been trying to keep tribal people away from their territories for decades. They subject them to genocidal violence and racism so they can steal their lands, resources and labor in the name of “progress” and “civilization.”

The situation facing the Guarani is one of the most urgent and horrific humanitarian crises of our time. In April 2016, Survival International launched its “Stop Brazil’s Genocide” campaign to draw the crisis to global attention in the run-up to the Rio 2016 Olympic Games.

Survival’s Director Stephen Corry said: “This is terrible news, and it is tragically all too typical of the appalling situation facing the Guarani in Brazil. We cannot sit idly by and watch the destruction of an entire people. If the Guarani’s legal right to live on their land is not respected and upheld, they will be destroyed."