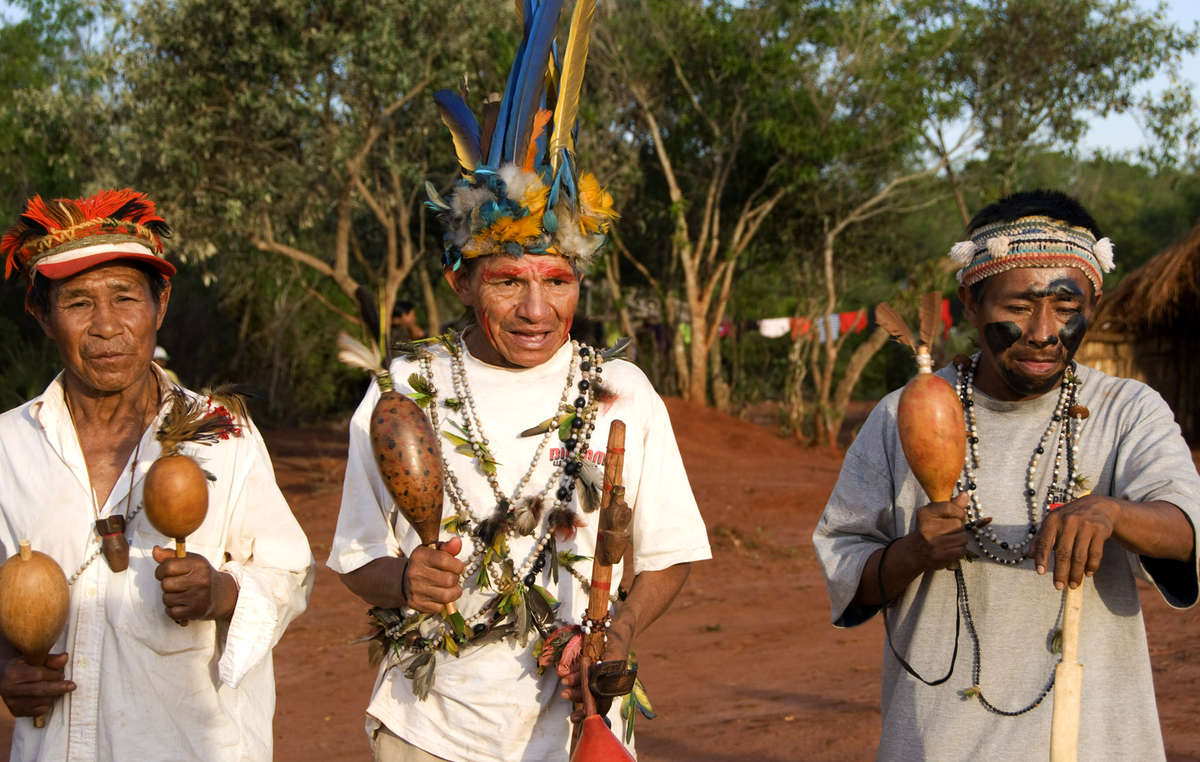 The Guarani have a deep sense of connection to their land, but have seen most of it stolen and destroyed by intensive agriculture. © Fiona Watson/Survival

On the eve of the Olympics, a tribe in Brazil has made a powerful statement to the ranchers who are destroying their land and subjecting them to genocidal violence and racism.

This follows a recent wave of violence and evictions, and the death of a seven-month-old baby in Apy Ka’y community in July.

Aty Guasu, the organization of Brazil’s Guarani tribe, said: “You are killers and you continue to attack our tekohá [ancestral lands]. But we won’t retreat from the fight for our lands which were stolen from us. Every time you kill one of us, we will be stronger in our struggle. Every time you shoot at us, we will take a step forward. And for every grave, we will reoccupy more land. We guarantee this.”

Aty Guasu has also produced a video compiling footage of recent instances of brutality against the Guarani and featuring graphic footage.

Many Guarani Indians have been forced to live on roadsides and are attacked by gunmen or forcibly evicted if they try to reoccupy their ancestral land. In July, Guarani families were evicted from their ancestral land by almost 100 heavily-armed police officers. A baby subsequently died of malnutrition and exposure, as Guarani houses were bulldozed and the community was forced back into makeshift encampments on the roadside. 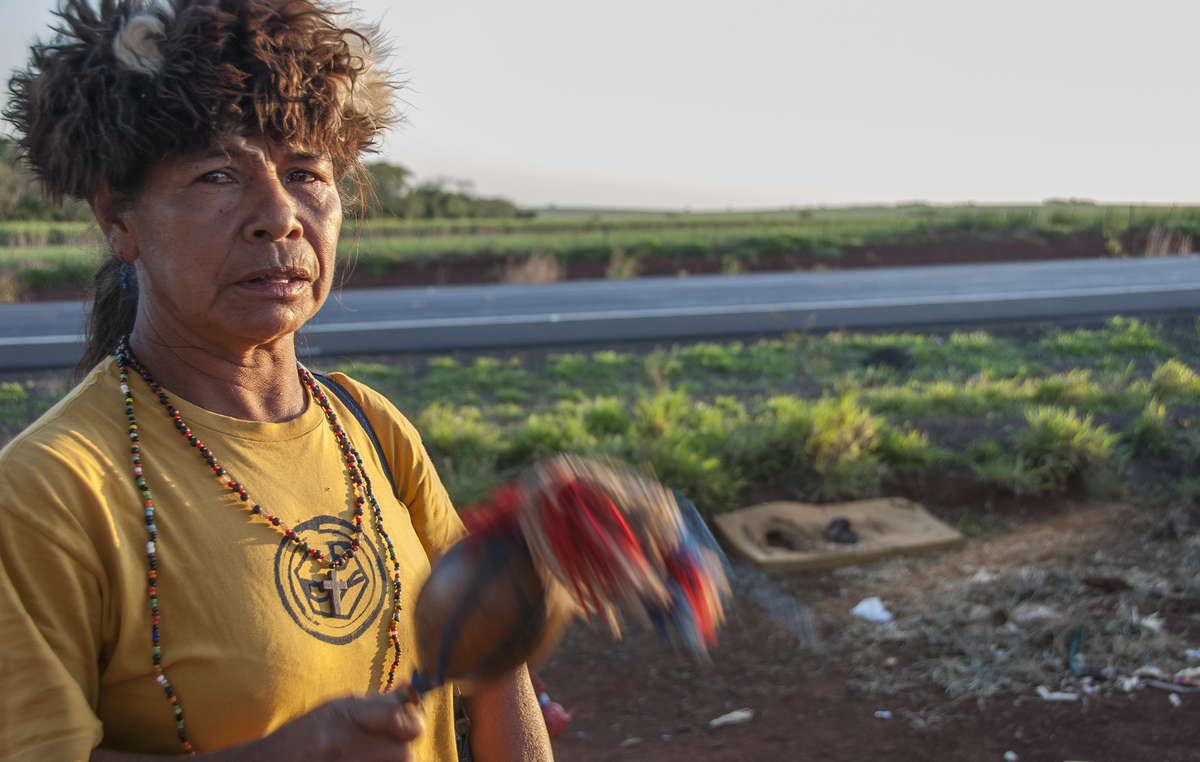 Earlier in 2016, several other Guarani communities were attacked by ranchers’ gunmen. One attack in Tey’i Jusu community led to one Guarani man being killed and several others – including a twelve year old boy – being hospitalized.

Over the past few decades, most of the Guarani’s land has been stolen by destructive agribusiness, and they live by the side of the road and in overcrowded reservations. Guarani children starve and many of their leaders have been assassinated. Hundreds of Guarani men, women and children have killed themselves, and the Guarani Kaiowá suffer the highest suicide rate in the world.

In a video made with equipment provided through Survival’s Tribal Voice project, Eliseu Guarani, a Guarani leader, said: “Brazil will host the Olympic games this year, the government will be on the world stage and is trying to hide the situation we Indigenous people face…We Guarani are being attacked, our leaders are being killed… and our land is not being returned to us, but these Olympic Games won’t show any of that. People around the world will watch these games and cheer and they’ll also be cheering our suffering.”

In April Survival International launched its “Stop Brazil’s Genocide” campaign for the run-up to the Rio 2016 Olympics, to draw attention to the situation facing tribes like the Guarani. Their lands, resources and labor are being stolen in the name of “progress” and “civilization.” 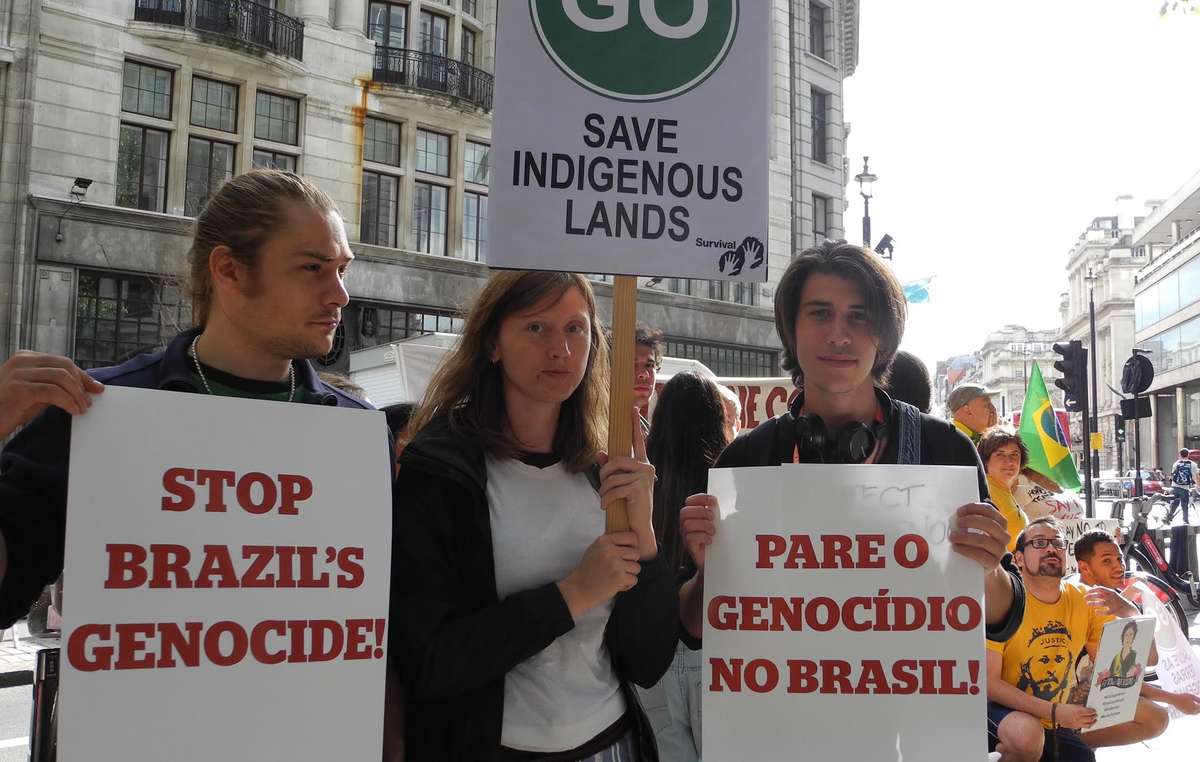 Survival supporters demonstrating outside the Brazilian embassy in London © Survival

On July 31st Survival supporters demonstrated outside the Brazilian embassy in London.

The campaign is calling for the Brazilian government to uphold the law by protecting the Guarani, demarcating their land, prosecuting murderers and providing food for starving communities until they get back their ancestral land. It is also concerned with uncontacted tribes – the most vulnerable peoples on the planet – and PEC 215, a proposed change to Brazilian law which would undermine tribal land rights and lead to the break up and exploitation of existing Indigenous territories.

Survival’s Stephen Corry said: “An urgent and horrific humanitarian crisis is unfolding across Brazil while the media’s eyes are diverted by the Olympic Games. The Guarani’s situation is not an anomaly, it’s the continuation of a centuries-old process of land theft, genocidal violence, slavery and racism. Scores of Indigenous people are dying and being killed, tribes across the country are being annihilated. It’s difficult to exaggerate the severity of this crisis which will only end when tribal peoples are respected as contemporary societies and their human rights protected. Brazil needs to act now, before more tribes are destroyed.”