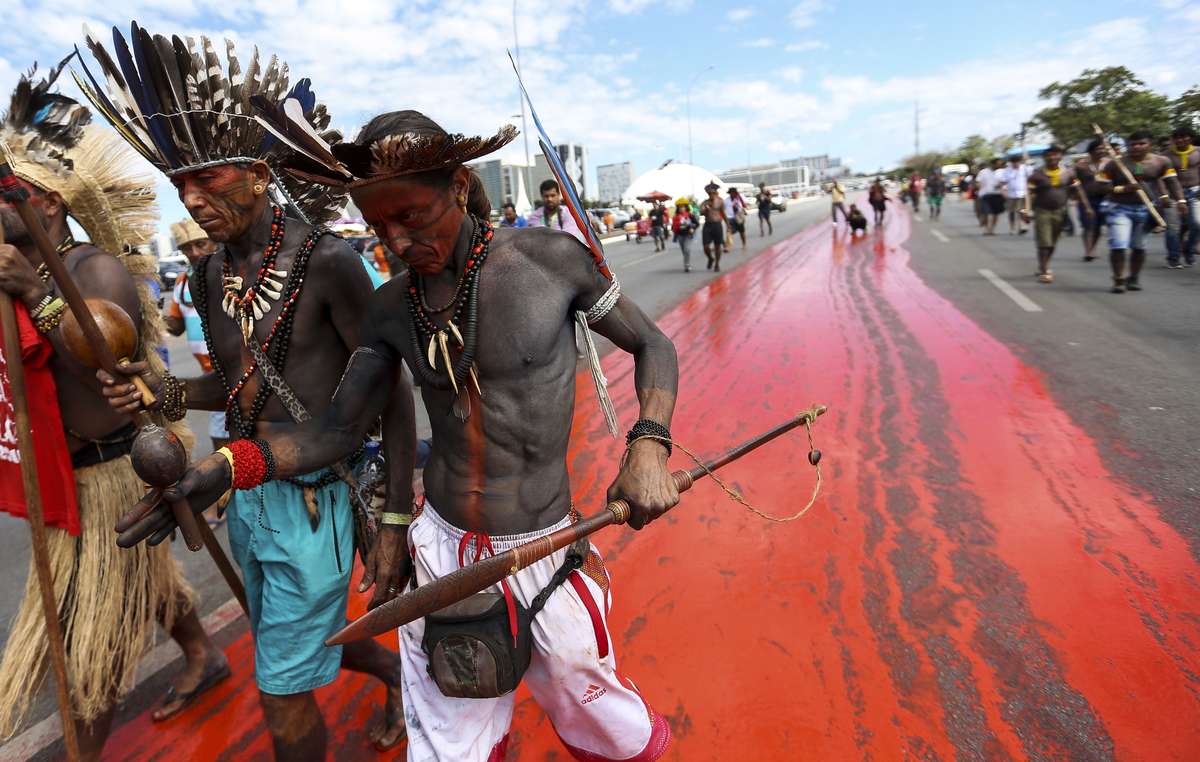 Image from indigenous protests in Brasilia, April 2018. By staining the streets red, we are showing how much blood has been shed in our fight for the protection of indigenous lands. said Sonia Guajajara, an indigenous leader © Marcelo Camargo/Agência Brasil

This page was last updated on January 5, 2019 and may contain language which is now outdated.

Jair Bolsonaro has started his Presidency in the worst possible way for the Indigenous peoples of Brazil. Taking responsibility for Indigenous land demarcation away from FUNAI, the Indian affairs department, and giving it to the Agriculture Ministry is virtually a declaration of open warfare against Brazil’s tribal peoples.

Tereza Cristina, the new head of the Ministry, has long opposed tribal land rights, and championed the expansion of agriculture into Indigenous territories. This is an assault on the rights, lives and livelihoods of Brazil’s first peoples – if their lands are not protected, they face genocide, and whole uncontacted tribes could be wiped out.

This onslaught on Brazil’s first peoples attacks the heart and soul of the Brazilian nation.

The theft of Indigenous territories also sets the stage for environmental catastrophe. Tribal peoples are the best conservationists and guardians of the natural world and evidence proves they manage their environment and its wildlife better than anyone else.

Indigenous people are already resisting. The Aruak, Baniwa and Apurinã tribes have said: “We don’t want to be wiped out by this government’s actions. Our lands play a vital role in maintaining biodiversity. We are people, human beings, we have blood like you do, Mr President, we’re born, we grow… and then we die on our sacred land, like any person on Earth. We’re ready for dialogue, but we’re also ready to defend ourselves."

Sonia Guajajara, an Indigenous leader and vice presidential candidate in the 2018 election, has said: "We will resist. If we’re the first people to be attacked, we’ll also be the first to react."

APIB, the Association of Indigenous Peoples of Brazil, says: “We have the right to exist. We won’t retreat. We’ll denounce this government around the world.”

Survival Director Stephen Corry said today: “Survival International has stood in solidarity with Brazil’s Indigenous peoples for 50 years – for their survival, for the protection of Brazil’s most biodiverse territories, for the health of our planet and for all humanity. We will continue to campaign passionately for their lives and lands to be fully respected and defended.”