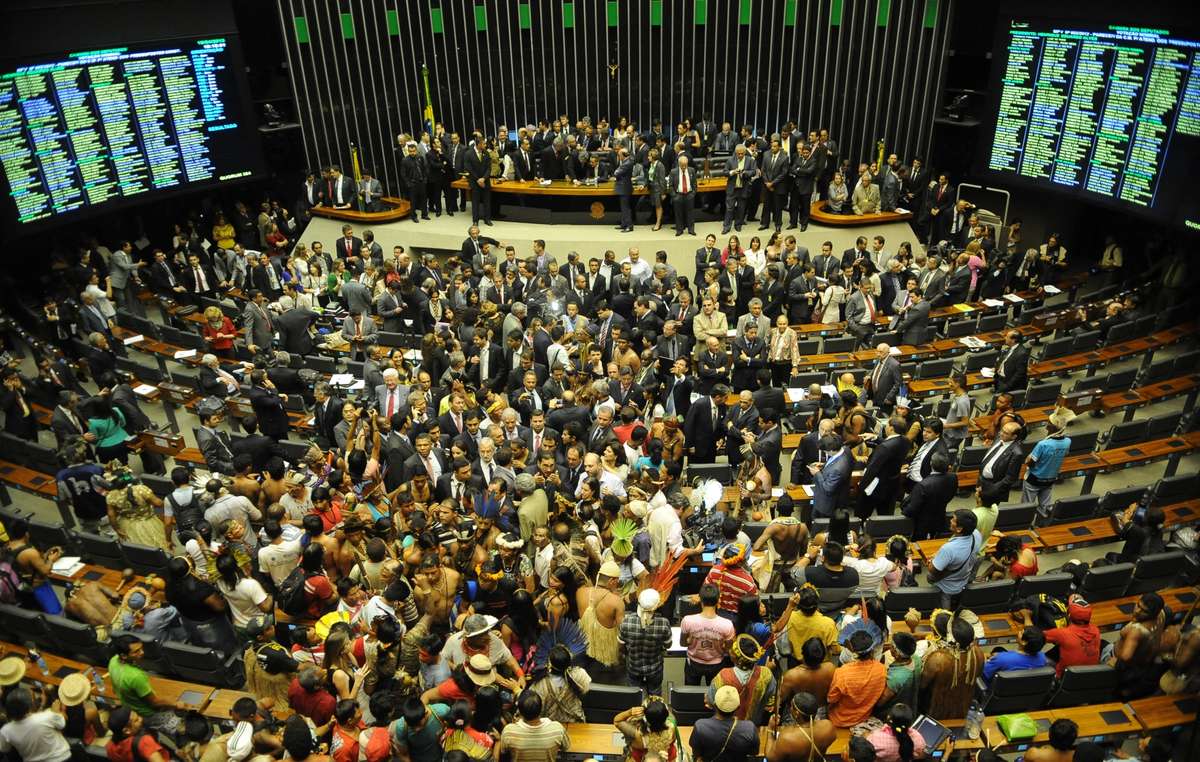 As Brazil marks its annual ‘Day of the Indian’ today, hundreds of Brazilian Indians of various tribes invaded and occupied part of the country’s Congress this week, to protest at attempts to change the law regarding their land rights.

The Indians are outraged about a proposed constitutional amendment that would weaken their hold on their territories. They fear that ‘PEC 215’, by giving Congress power in the demarcation process, will cause further delays and obstacles to the recognition and protection of their ancestral land.

The Indians say they will not stop protesting until the planned amendment is scrapped.

Alongside Directive 303, amendment 215 is a result of pressure by Brazil’s powerful rural lobby group which includes many politicians who own ranches on Indigenous land.

It could spell disaster for thousands of Indigenous peoples who are waiting for the government to fulfil its legal duty to map out their lands.

Whilst Brazil’s sugar-cane industry booms, benefitting from plantations on Indigenous land, the Guarani Indians of Mato Grosso do Sul suffer from malnutrition, violence, murder and one of the highest suicide rates in the world. Guarani spokesman Tonico Benites explains, ‘Guarani suicide is happening and increasing as a result of the delay in identifying and demarcating our ancestral land’.

Elsewhere in the country, Indigenous peoples are fighting for their land to be protected from waves of invasions at the hands of loggers, ranchers, miners and settlers. The Awá Indians in the north-eastern Amazon are now Earth’s most threatened tribe. The uncontacted Awá will not survive unless action is taken now to protect their forest.

Yesterday, the Yanomami association Hutukara organized a demonstration of about 400 Yanomami in Ajarani, in the eastern part of their territory. This area has been occupied by cattle ranchers for decades. Despite a court order to leave, they have refused to do so.

Hutukara’s vice-president Maurício Ye’kuana said, ‘The presence of the ranchers in the region has caused huge harm to the Indigenous people and to the environment, such as deforestation and burning of the forest. We want an end to this.’

Meanwhile Munduruku Indians have been protesting for months against the proposal to build a series of hydro-electric dams along the Tapajós, a large tributary of the Amazon.

Last month the military and police launched ‘Operation Tapajós’ in an attempt to stamp out the Indians’ protests against the arrival of technical teams surveying the area for the first dam, São Luis do Tapajós.

On 16 April a federal judge ordered that this operation be suspended, and that the Indians and other affected communities be consulted before technical studies are carried out. The judge also ruled that an environmental impact assessment should be carried out on the cumulative impact of all the dams planned for the Tapajós.