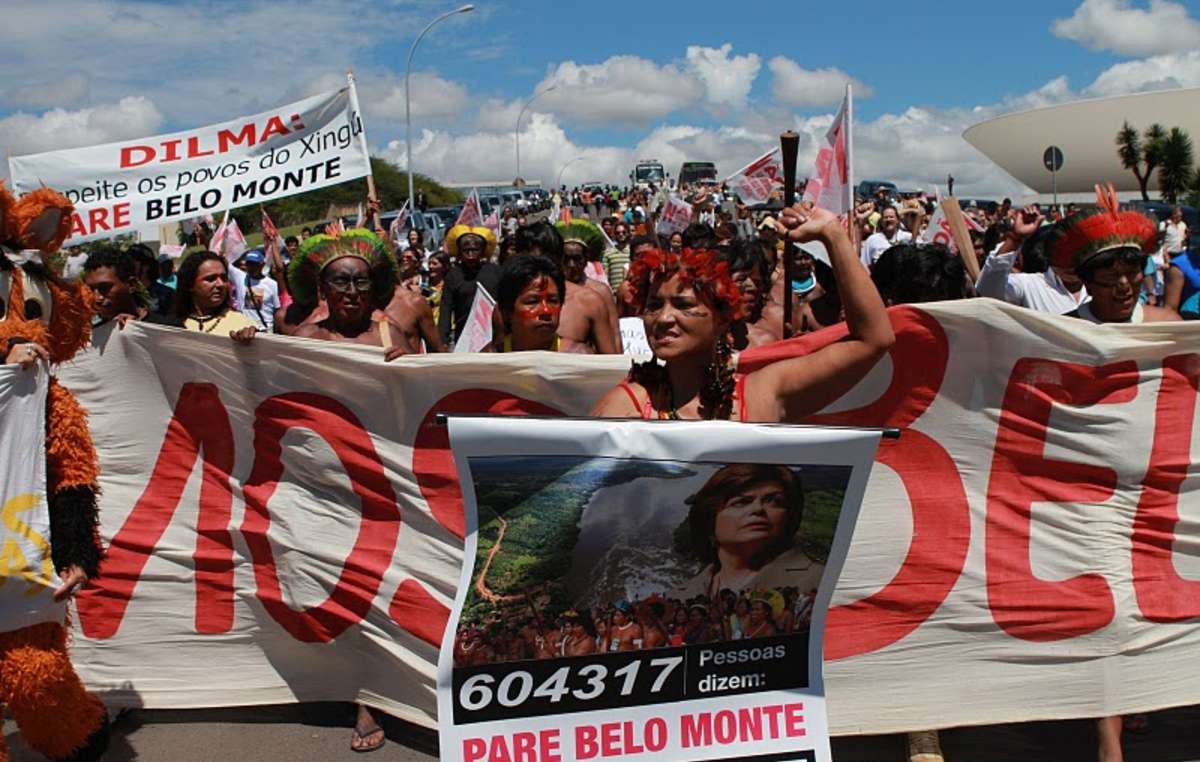 Indigenous people from the Amazon protesting in Brasília against the Belo Monte mega-dam project, Brazil. Numerous tribal peoples’ lives and livelihood are under threat due to the construction of this dam, which would be the world’s third largest dam upon completion. © Amazon Watch

Hundreds of people, including over 80 Amazonian Indians, gathered yesterday outside the Brazilian Congress and Presidential Palace to protest at the proposed Belo Monte dam in the Amazon rainforest.

A delegation of Indians entered the Presidential Palace to deliver a petition signed by around half a million people, calling on Brazil’s new President Dilma Rousseff to put a stop to the ‘disastrous’ dam.

The Indians also delivered a letter signed by more than 78 civil society organizations warning of the huge risks involved in the dam project and calling for it to be halted. Download the letter (in Portuguese, 258KB pdf).

Megaron Txucarramãe, a Kayapó Indian who participated in the protest, said today, ‘Belo Monte will bring huge damage to the Indians and to our land. It will flood our forest. Our forest provides us with food, our river provides us with fish. Everything will be destroyed if the dam is built. Our message to Dilma is that Belo Monte must not be built!’

Sheyla Juruna of the Juruna tribe said, ‘This is a life and death struggle… By pushing forward with this dam, the Dilma government is trampling on our rights. This is not just about defending the Xingu River, it’s about the health of the Amazon rainforest and our planet.’

If built, the Belo Monte dam would cause huge devastation to the rainforest upon which the Indians depend for their survival. The Indians have not given their consent for the project to go ahead.

The uncontacted Indians in the area are particularly vulnerable as they have little immunity to outside diseases and any contact with the immigrants expected to arrive for the dam construction could be fatal for them.

Survival International has written to President Dilma warning that Belo Monte puts the lives and livelihoods of the Indigenous peoples of the area, especially the uncontacted Indians, at huge risk.

Last month, Brazil’s environment agency IBAMA issued a partial construction licence for the dam, despite the fact that the consortium building the dam, ‘Norte Energia’, has failed to comply with numerous social and environmental conditions required for the licence to be granted.

Opposition to the dam is growing, amongst Brazilian and international environmental and human rights groups, lawyers, scientists, economists and politicians.