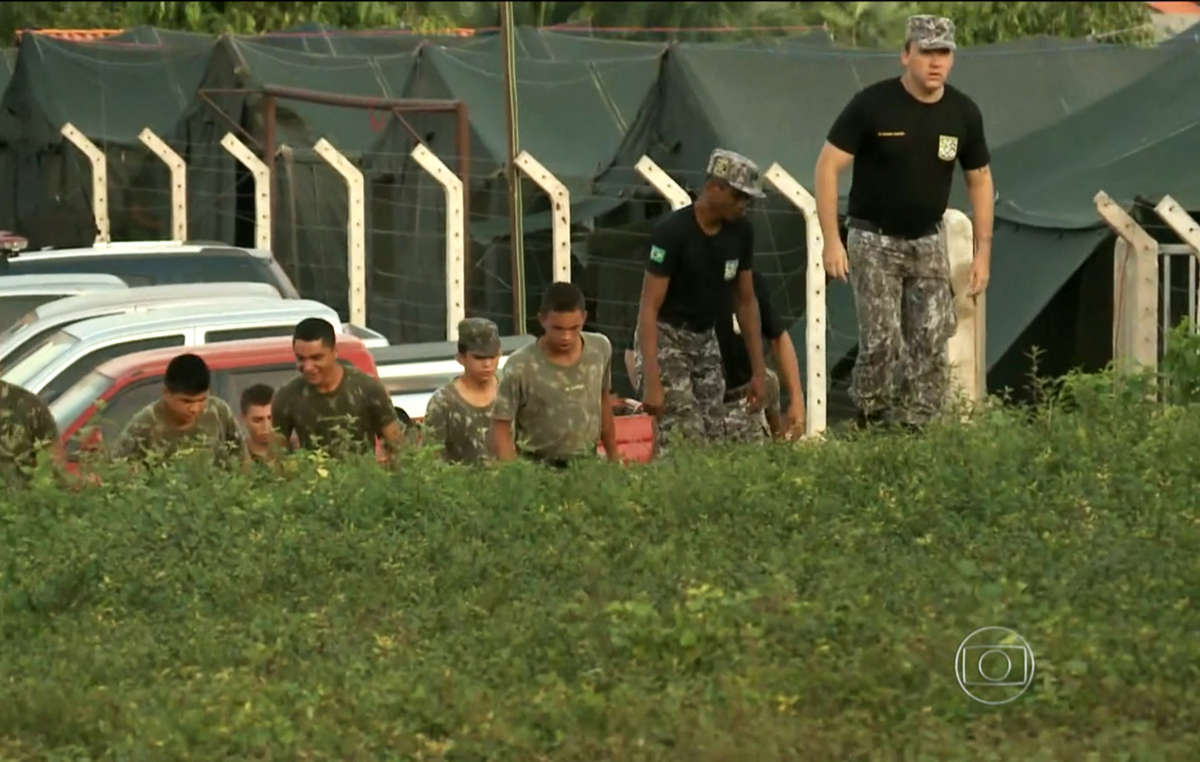 More than six months after the Brazilian army moved in to tackle illegal logging outside the land of the Awá, the Brazilian government has now started a major ground operation to evict illegal invaders from inside the Awá’s land. © Globo TV

After months of campaigning by Survival International, Brazil’s government has launched a major ground operation to evict illegal invaders from the land of the Awá, Earth’s most threatened tribe .

Soldiers, field workers from Brazil’s indigenous affairs department FUNAI, Environment Ministry special agents and police officers are being dispatched to notify and remove the illegal settlers, ranchers and loggers – many of whom are heavily armed – from the Awá indigenous territory in the North-Eastern Brazilian Amazon.

The operation comes at a crucial time as loggers are closing in on the tribe and more than 30% of the forest has already been destroyed.

In June 2013 Brazil’s military launched a ground operation against illegal logging around the land of the Awá. The forces closed down at least eight saw mills and confiscated and destroyed other machinery, but they did not remove the loggers and ranchers from inside the Indians’ land.

An Awá man told Survival, ‘For a long time we’ve been asking for the invaders to be removed… we don’t want to see the loggers destroying our forest. We like to see the forest standing.’ 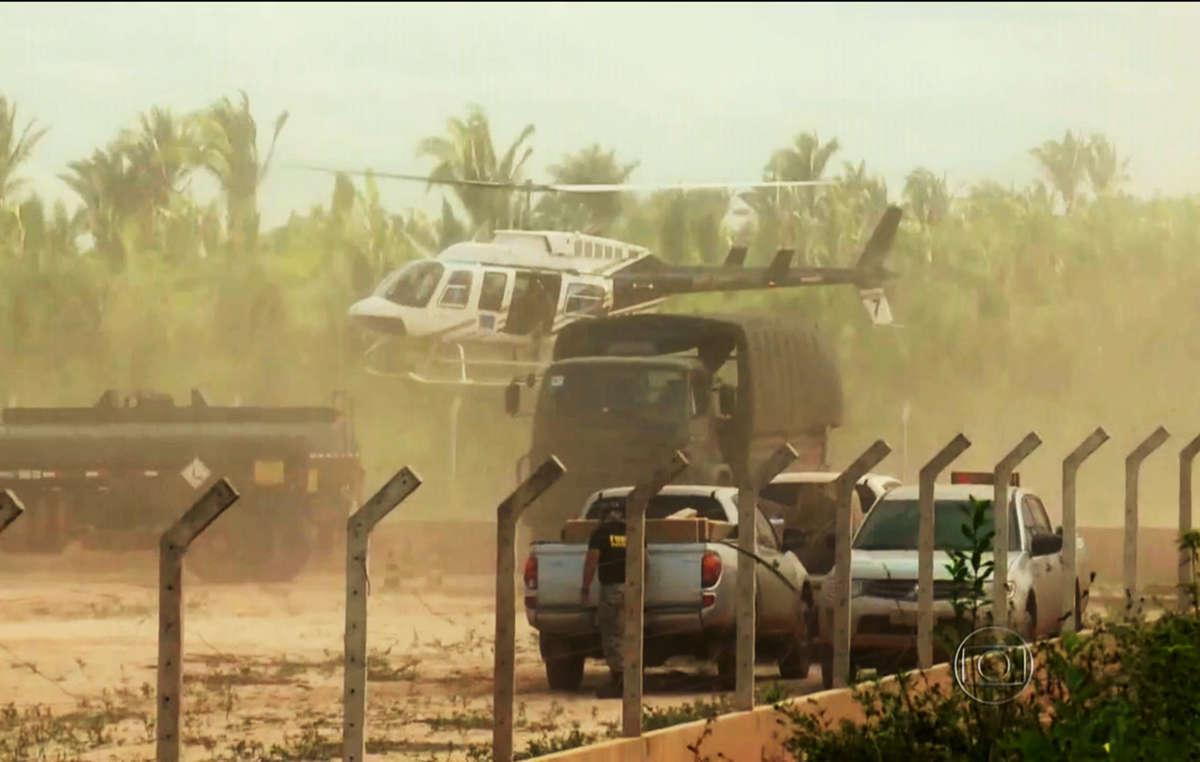 Army helicopters and trucks move in as part of the operation. © Globo TV

This break-through operation follows a high-profile campaign by Survival International, which has been backed by celebrities such as Hollywood stars Colin Firth and Gillian Anderson, UK fashion designer Vivienne Westwood and Brazilian photographer Sebastião Salgado, who recently visited the tribe to document their plight.

Salgado’s images and the Awá’s shocking story reached millions of people worldwide as they were featured in Vanity Fair, the Sunday Times and Brazilian news outlet O Globo.

Since the launch of the campaign in April 2012, Survival’s supporters have sent more than 55,000 letters to Brazil’s Minister of Justice, urging him to evict the invaders, and have spread the campaign’s awáicon logo around the world’s landmarks, such as Brazil’s Sugarloaf Mountain, South Africa’s Table Mountain, San Francisco’s Golden Gate Bridge and the Eiffel Tower in Paris.

The Inter-American Commission on Human Rights, the Americas’ leading human rights body, also demanded answers from the Brazilian government, having received an urgent petition from Survival and Brazilian NGO CIMI.

As a result of the global campaign, the Awá were put at the top of FUNAI’s priority list in April 2012, but it has taken the government until now to start evicting the illegal invaders, while more forest has been destroyed. 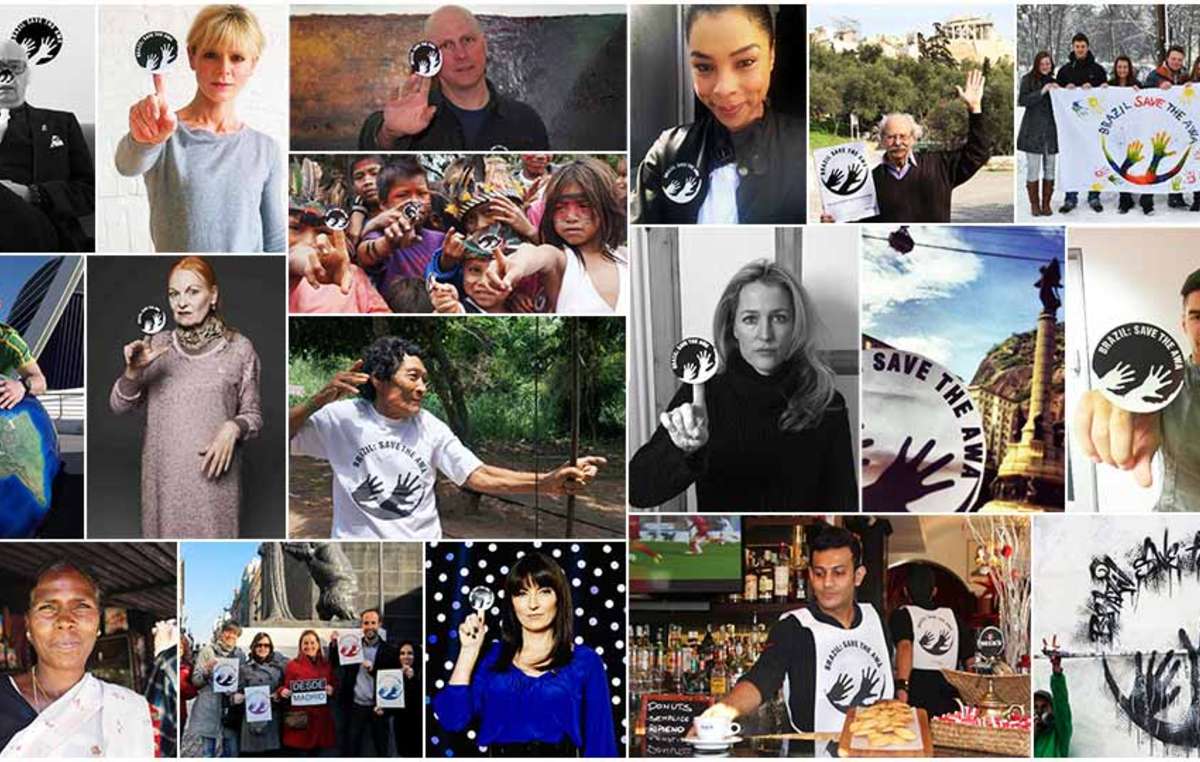 The global campaign to save the Awá has been backed by celebrities and thousands of supporters around the world. © Survival International

The Awá are one of the last nomadic hunter-gatherer tribes in Brazil and depend entirely on the rainforest. They have been finding it increasingly difficult to find game and are scared to go hunting for fear of encountering the armed loggers.

Around 100 Awá are uncontacted and are particularly vulnerable to attacks and the spread of diseases to which they have little immunity.

Survival has welcomed the start of the evictions operation, and is now urging the Brazilian authorities to put in place a long-term solution to stop the invaders from returning, and to guarantee the safety of the 450-strong tribe.

Survival’s Director Stephen Corry said today, ‘This is a momentous and potentially life-saving occasion for the Awá. Their many thousands of supporters worldwide can be proud of the change they have helped the tribe bring about. But all eyes are now on Brazil to ensure it completes the operation before the World Cup kicks off in June, and protects Awá land once and for all.’

Note to editors:
- Download a timeline of Survival’s campaign to save the Awá (pdf, 92 kb)
- A groundbreaking TV documentary on the dramatic destruction of the Awá’s forest, produced in collaboration with Survival, will be broadcast on Tuesday, January 7, on France 5.