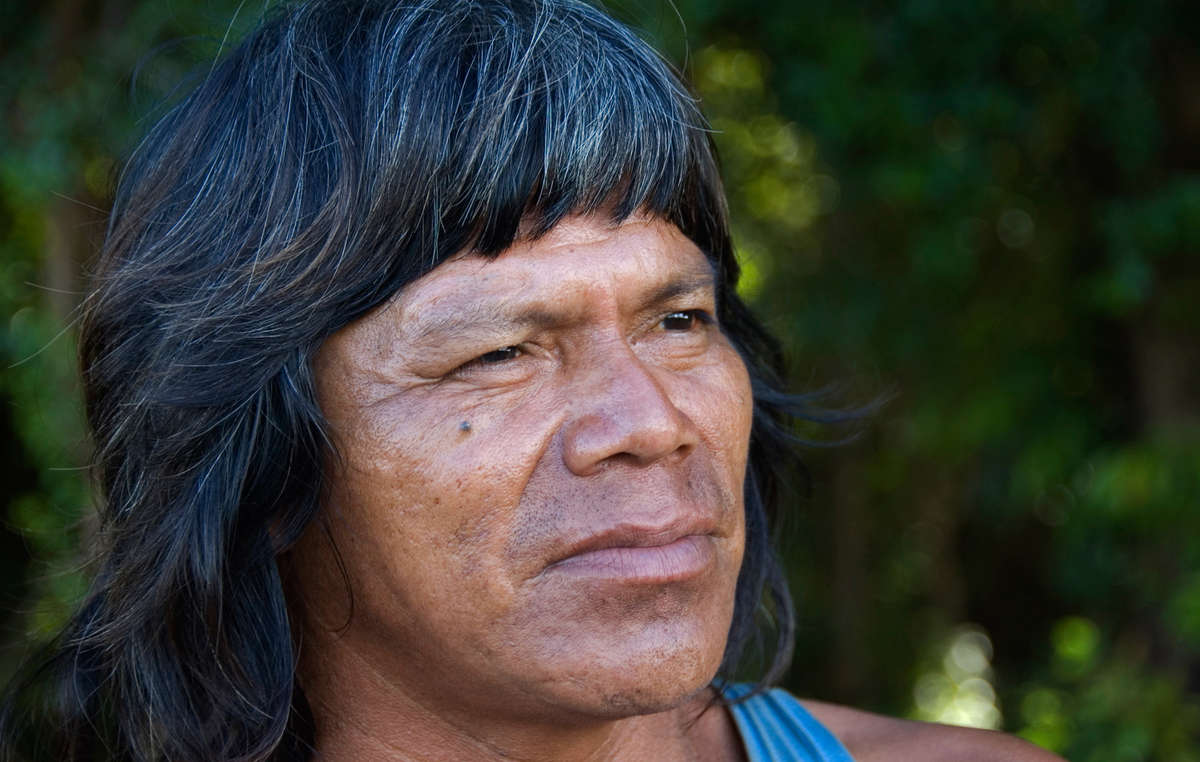 One of Brazil’s most prominent indigenous leaders, Ambrósio Vilhalva, has been stabbed to death near his community in southern Brazil. He was 53.

Although details of the murder are confused and there are conflicting accounts, many believe his murder was at the behest of the landowners who have taken over his people’s territory.

With his large, powerful frame, Ambrósio’s physical presence made an instant impact. He was genial and outgoing, and well known for his philosophizing. He liked nothing better than to expound his views on the universe whilst drinking tereré (the ubiquitous tea of southern Brazil) from a cow-horn gourd. His easy-going manner masked a strong will and a deep determination to fight for what he believed in – land, above all, and justice for his people.

Ambrósio’s life typified that of so many Guarani. His community, Guyra Roka or ‘Place of the Bird’, was expelled from their tekoha (ancestral land) in the 1940s and 50s by ranchers and farmers, and dumped in a tiny reserve already overcrowded with hundreds of other Guarani refugees. Violence, suicide and malnutrition were soon rife.

This pattern has been repeated across southern Brazil, where the Guarani, numbering some 50,000, have been powerless witnesses to the theft of 99% of their once-verdant territory. With no land to cultivate and no means of sustaining themselves, the Guarani now have one of the highest suicide rates in the world.

Like many, Ambrósio and his community dreamed of returning to their tekoha. In 2000, led by Ambrósio and his father Papito (the rezador or religious leader) the community moved out of the reserve to camp on a roadside near their land, now cleared, fenced off and filled with endless fields of sugar cane. Life here was grim too – their rickety tarpaulin shelters were permanently enveloped in clouds of dust from the trucks thundering past day and night. Children were malnourished, and adults were forced to seek work on the ranches occupying their land.

Tired of waiting for the government to take action, Ambrósio and Papito led three attempts to reoccupy their land, finally succeeding in 2004. Avoiding the ranchers’ pistoleiros, the community settled on a tiny piece of land where they planted crops amidst the sugar cane. Largely thanks to Ambrósio’s tireless and passionate advocacy, the Minster of Justice finally recognized Guyra Roka as Guarani land in 2009. But it was a victory in name only – the landowners vowed not to move, and occupy the area to this day. The largest and most powerful is Zé Teixeira, a state congressman.

Ambrósio was catapulted into international stardom in 2008 when he played the lead role in Birdwatchers, an award-winning feature film by Marco Bechis that highlighted the bitter conflict between the ranchers and the Guarani. With his love of language and powerful, brooding presence, Ambrósio was a natural. The film’s director later said he tore up the script and let the Guarani speak their parts as they saw fit.

He attended the launch of the film at the Venice Film festival in 2008, along with other Guarani actors. Here he spoke of the Guarani’s long struggle for land rights and equality in one of Brazil’s richest and most violent states, and said, ‘This is a great film, as people can observe who the Indians really are and see their problems.’

Prophetically, he told a Survival campaigner who accompanied him that, ‘I am marked. When I return to my land they will come for me.’

In a grim turn of the dice, fiction has become reality. Ambrósio’s character in the film is brutally murdered as he leads his people back on to their land at the dead of night to avoid the ranchers’ gunmen.

Whilst he wore his fifteen minutes of fame lightly and toured the sights of Venice with his tereré gourd always to hand, it was not easy to return to the grinding poverty, the constant death threats from the patrolling gunmen, and the total abandonment by the Brazilian state.

Ambrósio is the latest in a long line of Guarani leaders systematically targeted for their activism. Ever since the reoccupation he had received death threats, and the intimidating presence of pistoleiros patrolling around the community meant that he rarely ventured out. Medical staff from the government health agency who were supposed to make regular visits stopped coming, and abandoned the community to their fate. All this undoubtedly took a toll on his health and his family.

Ambrósio leaves his wife Maria, his father Papito and several children and grandchildren.