The Wanniyala-Aetto (‘forest people’) live in a region of tropical forest to the east of Sri Lanka’s central mountain massif. They are thought to have lived in Sri Lanka for many millennia before the arrival of the now dominant Sinhalese and Tamils. They are commonly known by outsiders as ‘Veddah’.

Until recently, the Wanniyala-Aetto lived in their forest. They hunted deer, wild boar and other animals and birds, and collected honey, fruit and nuts. They also practiced a form of ‘shifting cultivation’, clearing small plots of land or ‘chenas’ from the forest and planting grains, vegetables and tubers.

A family would move to a new plot every year, returning to the same piece of land after seven or eight years.

Today, the Wanniyala-Aetto live in villages outside their forest. They can no longer practice ‘chena’, and have only small plots of land for growing rice and vegetables and raising cattle and goats. Those hunting and gathering in the forest now risk arrest and violence, but many continue to do so.

Others work for wages on the land of Sinhalese settlers or perform dances and sell trinkets to tourists. Some women work in domestic labour in the Middle East.

In the 1950s the Sri Lankan government started to open up the Wanniyala-Aetto’s land for Sinhalese settlers. Forests were bulldozed, hunting grounds were flooded, and thousands of settlers began to arrive.

In 1983, the Wanniyala-Aetto’s last forest refuge was designated as the Maduru Oya National Park. They were moved to government villages and banned from entering their forest without a permit. They were also banned from hunting and gathering.

The transition to this new life has been difficult, and many families
struggle to grow enough food on the small plots they were given by the
government.

Children are now taught the language and religion of the dominant Sinhalese population. Alcoholism and mental illness are rife in the new communities.

Since 1998, some men have been granted permits to hunt and gather in a small area of their forest, but those without permits continue to face fines or imprisonment if caught.

In recent years, three Wanniyala-Aetto, all with permits, have been shot dead by park guards. Many Wanniyala-Aetto want to return to their land in Maduru Oya.

Survival is calling on the Sri Lankan government to recognise the rights of the Wanniyala-Aetto to live, hunt for their own consumption and gather forest produce inside the Maduru Oya National Park. 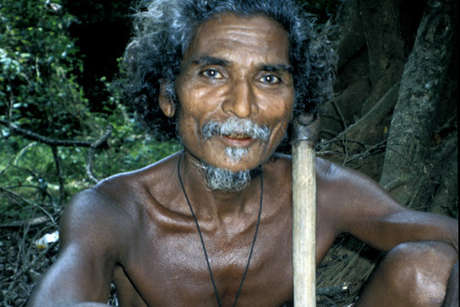 Sri Lanka: Survival calls on UN to stand up for Wanniyala-Aetto

Survival has urged the UN Human Rights Council to call on Sri Lanka to recognize the rights of the Wanniyala-Aetto. 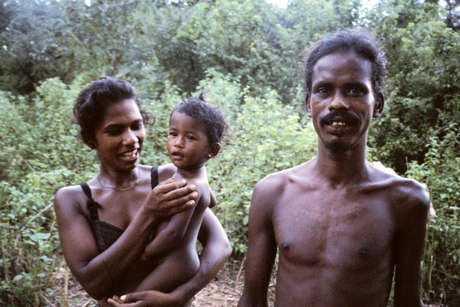 Charges against four Wanniyala-Aetto men, arrested in Sri Lanka in August for collecting honey on their own land, have been dropped.

Four men from the Wanniyala-Aetto tribe of Sri Lanka have been arrested for collecting honey on their own land.

Wanniyala-Aetto fined for trespassing on their land

Two Wanniyala-Aetto men have been fined for trespassing on their own land in an attempt to return to their hunting grounds.

Ten Wanniyala-Aetto arrested for trespassing on their own land

Ten Wanniyala-Aetto people have been arrested for trespassing on their own land in an attempt to return to their hunting grounds. They face trial later this year.