The Yanomami have been resisting the destruction of the Amazon for decades. © Fiona Watson/Survival

The COP 21 summit to be held in Paris from the end of the month has so far declined to give a voice to the Indigenous peoples most directly threatened by ecological catastrophe. This omission comes despite clear evidence that tribal peoples are the best conservationists of the environments in which they live.

The global environmental summit will focus on energy policy in industrialised nations rather than the destruction of natural environments such as the Amazon. Despite the extensive efforts of Indigenous peoples in Brazil and elsewhere in South America to resist logging, mining and ranching activities that continue to destroy vast swathes of the rainforest, there appears to be no impetus to lend them any support at COP 21.

A recent report from the Rights and Resources Initiative (RRI) found that very few of the governments attending the Paris summit have even mentioned Indigenous rights in their conservation or climate policies. Twenty-six out of the forty-seven countries examined made no reference to tribal land management at all in their proposals.

Despite their exclusion from the major speaking platforms, hundreds of Indigenous leaders from South America and elsewhere in the world will be attending in order to have their voices heard. They will include celebrated tribal activists Davi Yanomami, Raoni Kayapó and Mauricio Yekuana. 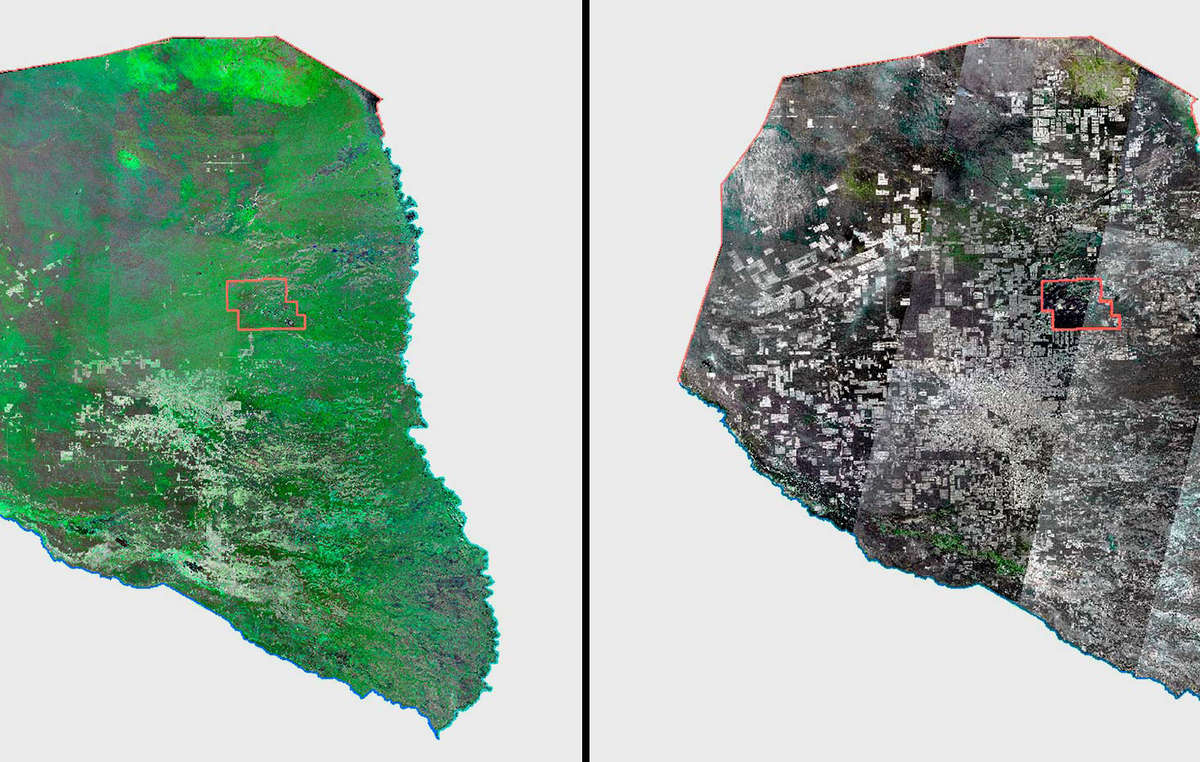 In the Paraguayan Chaco, robbing tribal people of their land has accelerated deforestation, as this satellite image shows © Survival International

On the subject of protecting the Amazon, Davi Yanomami said: “The climate is changing. Global warming, as you call it. We call it Motokari. It’s making the earth’s lungs sick. So we need to respect this world, we need to put the brakes on, we can’t continue destroying nature, earth, rivers. You can’t continue killing us, the Indians in the forest. We Indians know how to look after our forest.”

Some of the tribes actively battling to save their environment include:

• The Guajajara: A group known as the Guajajara Guardians have attracted attention for their bold efforts at resisting deforestation. They have been involved in clashes with armed logging gangs, and even organised initial efforts to extinguish a huge fire in the Arariboia Indigenous territory over the past two months.

• The Ka’apor: Earlier this year, the Ka’apor responded to illegal logging in their territory by forming an Indigenous ‘army’ to fight back. They have since suffered retributive violence.

• The Guarani: The Indigenous people of southwestern Brazil and Paraguay continue to have violence inflicted on them for their attempts to hold on to their land against sugar cane and soya farmers and big cattle ranching operations. In October, two Guarani teenagers were shot by ranchers, and the tribe has in recent years been trying to organise boycotts of the internationally exported beef and soya produced on their lands without their consent.

Tribal peoples are the best conservationists and guardians of the natural world. They are also the people most acutely affected by the destruction of the natural environment in which they live. Without the support of the international community, however, South America’s Indigenous people and the Amazon regions in which they make their homes could be destroyed forever.

Survival International director Stephen Corry said: “Our industrialized society is responsible for destroying the natural world and polluting the atmosphere. Tribal peoples, on the other hand, have proven themselves far better at looking after the environment. So the arrogance of assuming that “we” have all the answers while sidelining tribal peoples is disgraceful. It’s time to start listening to the tribal voice, and to recognize that we are junior partners in the fight to save the environment.”