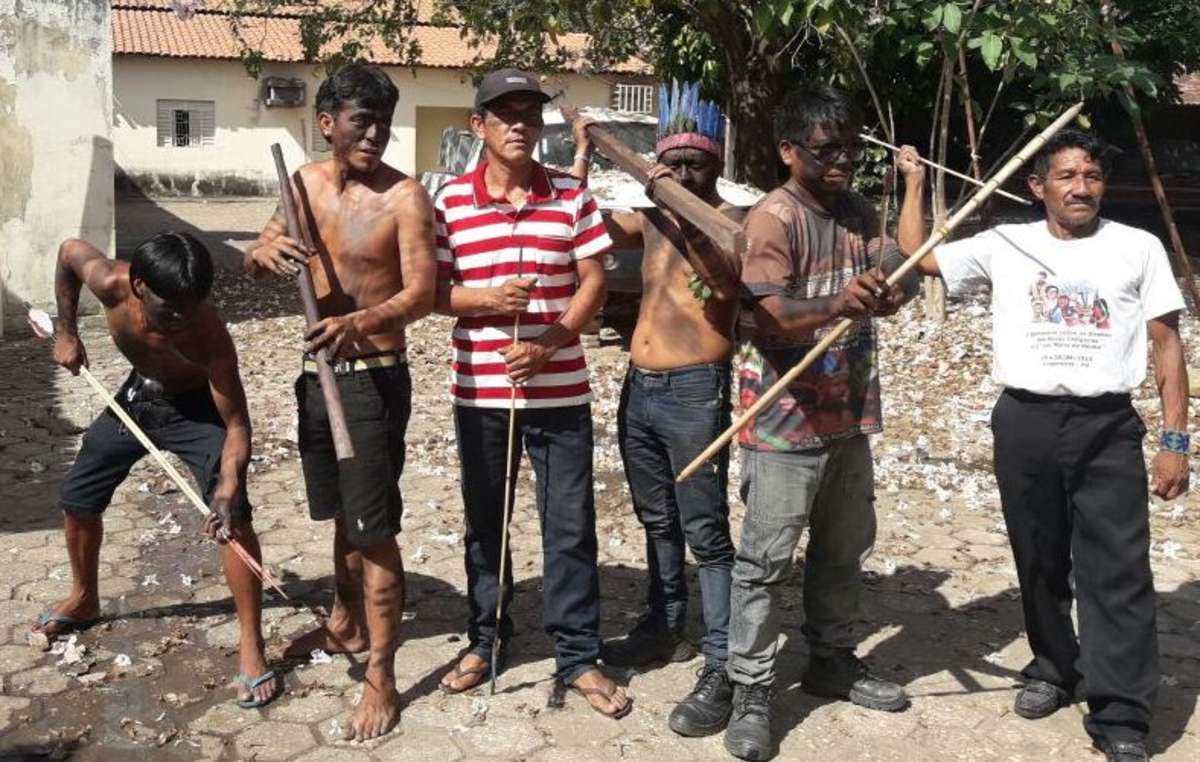 A group of Brazilian Indians hailed as heroes for patrolling the Amazon and evicting illegal loggers have occupied government offices, to demand protection for their lands.

It is the first protest of its kind by the Indians, known as the Guajajara Guardians. Their people face an emergency, as much of their forest has been razed to the ground.

The Guardians work to protect their forest in the north-eastern Brazilian Amazon. They share the area, known as the Arariboia Indigenous territory, with uncontacted Awá Indians.

The Indians’ forest is an island of green amid a sea of deforestation. Heavily armed illegal loggers are now penetrating this last refuge, and the government is doing little to stop them.

Tainaky Guajajara, one of the Guardians’ leaders, said at the protest in the city of Imperatriz: “We’re occupying FUNAI [government Indigenous affairs department] to demand our rights to the land, and protection for the environment. We need help, urgently. Our land is being invaded as we speak. The Brazilian government has forgotten us – it’s as if we don’t exist. So we’ve reached the limit. We will no longer put up with the way they treat us.”

The Guajajara Guardians have taken matters into their own hands to save their land from destruction, and to prevent the genocide of the Awá. They patrol the forest, detect logging hotspots and crack down on invasions.

Kaw Guajajara, the Guardians’ Coordinator, said: “The uncontacted Awá can’t live without their forest. Our work has stopped many of the invaders… As long as we live, we will fight for the uncontacted Indians, for all of us, and for nature.”

Their work is dangerous – the Guardians constantly receive death threats from the powerful logging mafia, and three Guardians were killed in 2016. But they continue courageously and they know that the Awá, like all uncontacted peoples, face catastrophe unless their land is protected.

Their operations have succeeded in drastically reducing the logging, but they urgently need help from the Brazilian authorities: Resources and equipment for their expeditions, and support from government agents who can arrest the loggers and keep them out.

The Guardians are also demanding that the government implement an agreement drawn up by FUNAI, the military police force and the State’s security forces to build base camps to protect the territory, and to carry out joint operations to police the area.

Survival International’s Director, Stephen Corry, said: “The Guardians are protecting one of the last patches of Amazon rainforest in the region. Their determination to keep their forest intact is more important than ever as President Temer’s administration is trying to slash Indigenous land protection throughout Brazil. The Guajajara Guardians are unique and an inspiration to all who care for human rights and the environment. The government’s constitutional duty is to help them protect the forest. Its destruction could wipe out the uncontacted Awá. This is another humanitarian crisis in Brazil’s treatment of its tribal peoples.”