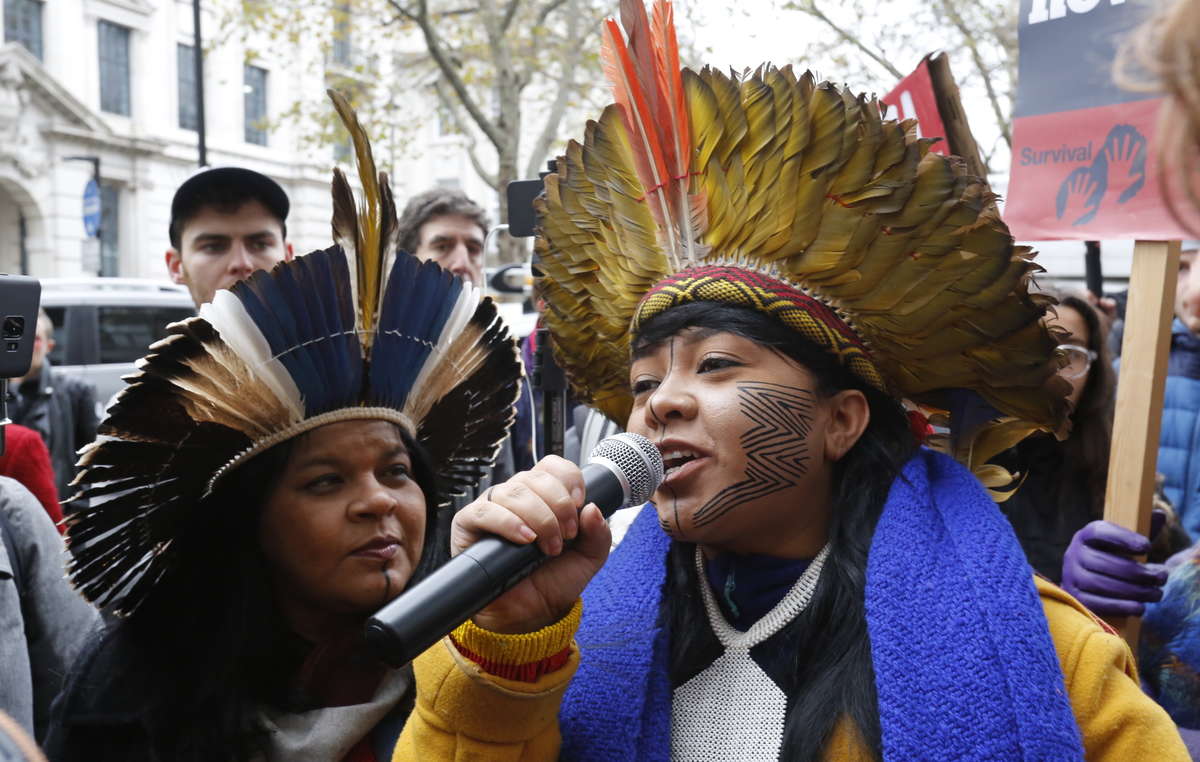 Protestors will gather outside the Brazilian Embassy in London to call for an end to the genocidal attacks being waged against Brazil’s Indigenous peoples. Supporters of Amazon Rebellion, Brazil Matters, CAFOD, Greenpeace, Parents for Future and Survival International will protest to #StopBrazilsGenocide as part of the “Struggle for Life” (“Luta pela Vida”) global action led by the Association of Indigenous Peoples of Brazil (APIB).

The protestors will stand in solidarity with APIB against the “Marco Temporal” (or “Time Limit Trick”), draft bill 490 known as the “Bill of Death”, and a series of other genocidal plans and actions by the Bolsonaro government which threaten the survival of Brazil’s Indigenous people.

The protest coincides with a week-long protest camp in Brasília that thousands of Indigenous people are expected to join, and a series of actions across the globe including a protest in San Francisco.

APIB said: “May the country listen to its Indigenous peoples. Our lives are linked to the earth, as we live in communion with it. We are the guardians of the forests and all forms of life that live there. We are facing a Congress that continues to push its anti-Indigenous agenda. We are fighting against the Time Limit Trick, scheduled to be voted by the Supreme Court on August 25th. We will resist!”

Brazil’s Supreme Court is due to restart voting on the Time Limit Trick on 25 August. The Time Limit Trick is a proposal put forward by the agribusiness sector in Brazil claiming that Indigenous peoples only have the right to territory that they were physically occupying on October 5, 1988 – the day the current Constitution came into force.

- The Xokleng: one of their territories is the subject of the Supreme Court case due to commence on 25 August and set to decide on the validity, or not, of the Time Limit Trick.

- The Guarani: nearly all their land was stolen before 1988 and is now used for agribusiness. They would be among the hardest hit. Their campaign to get their land back, already a mammoth battle, would become even harder and bloodier.

- The uncontacted Kawahiva: their existence and location was officially confirmed after 1988, like many other uncontacted tribes.

- Many other uncontacted tribes, whose existence still hasn’t been officially confirmed by the government, despite plenty of evidence. There are 86 such cases, one of which is the uncontacted Indians of Ituna Itatá Indigenous territory, whose emergency Land Protection Order is due to expire imminently.

If approved, the Time Limit Trick would set Indigenous rights back decades and could wipe out whole uncontacted tribes. The Indigenous movement and their allies are campaigning for it to be scrapped.

Pictures will be available shortly after the event.