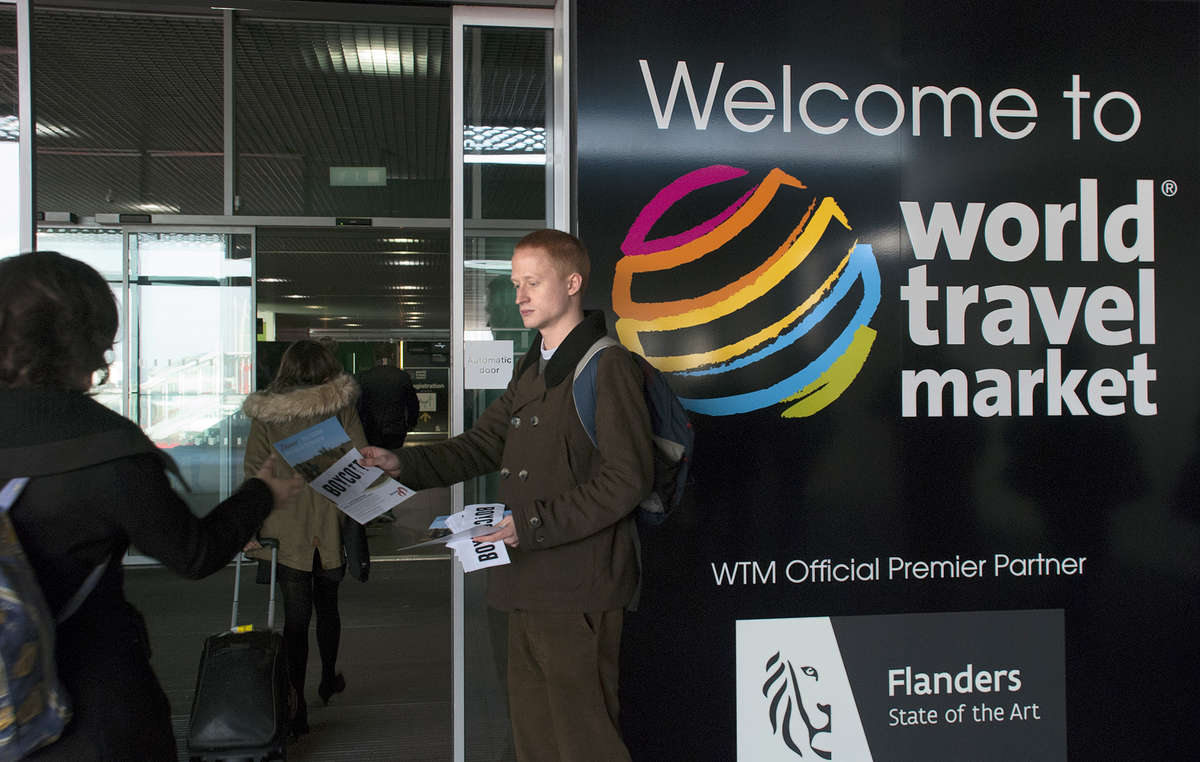 Protestors handed leaflets to visitors to the World Travel Market in London, calling for a boycott of Botswana tourism until the Bushmen are allowed to live in peace on their land. © Sophie Pinchetti/Survival

Supporters of Survival International, the global movement for tribal peoples’ rights, called for a boycott of Botswana tourism at the World Travel Market in London today, over the country’s relentless persecution of Africa’s last hunting Bushmen.

On today’s World Responsible Tourism Day, protestors handed leaflets to visitors to the leading travel industry event, where the Botswana Tourism Organisation is hosting a stall all week. Botswana actively promotes visits to the Bushmen’s ancestral land in the Central Kalahari Game Reserve, while starving the tribespeople off their land by preventing them from hunting.

Earlier this year, the Botswana government imposed a nationwide ban on hunting without consulting the Bushmen. Now they are accused of “poaching” because they hunt their food. And they face arrest and beatings, torture and death, while fee-paying big-game hunters are encouraged to kill giraffes and zebras on private game ranches.

There is no evidence that the Bushmen’s way of hunting is unsustainable. © Philippe Clotuche/Survival

And while Botswana’s President Ian Khama is praised by international conservation organizations, he has allowed fracking exploration and recently opened a diamond mine on Bushman land.

In a recent interview with The Guardian, President Khama revealed his disdain for the Bushmen. He said the Bushmen lived a “very extinct…very backward form of life,” and claimed they were responsible for “severe loss of wildlife” in the reserve.

There is no evidence that the Bushmen’s hunting methods are unsustainable. On the contrary, a study conducted between 1986 and 1996 found that numbers of some antelope species hunted by the Bushmen actually increased.

Over 8,000 people have pledged not to visit Botswana until the Bushmen are allowed to live freely on their land, and several tour companies have joined the boycott.

Survival’s Director Stephen Corry said today, “Tribal peoples are portrayed as backward and primitive simply because their communal ways are different. It’s a way of justifying the theft of their land and resources in the name of ‘progress’ and ‘civilization’. President Khama’s comments are nothing new – they reflect a level of prejudice and racism that was typical of the colonial era and which should have long since been consigned to the history books.”