Tribal peoples are the best conservationists and guardians of the natural world. Survival’s new report reveals how the world’s biggest conservation organizations are implicated in their eviction from ‘protected areas.’ © Selcen Kucukustel/Atlas

A hard-hitting new report launched by Survival International – the global movement for tribal peoples’ rights – reveals how conservation has led to the eviction of millions of tribal people from “protected areas.”

Many of the world’s biggest conservation organizations, including the Worldwide Fund for Nature (WWF) and The Nature Conservancy, are implicated in this issue. And United for Wildlife, set up by Prince William and Prince Harry, does not acknowledge calls to back tribal peoples’ rights to live on their traditional lands and hunt for food.

The launch of the “Parks Need Peoples” report coincides with the World Parks Congress in Sydney, a once-in-a-decade global conference on protected areas conservation, and comes ahead of Prince William and Kate’s launch of United for Wildlife in the United States next month.

Survival’s report shows that nearly all protected areas are, or have been, the ancestral homelands of tribal peoples, who have been dependent on, and managed them for millennia. But in the name of “conservation”:

• Tribal peoples are being illegally evicted from these lands.
• They are accused of “poaching” because they hunt their food.
• They face arrest and beatings, torture and death at the hands of anti-poaching squads.
• Although the tribes have been evicted, tourists, and in some cases even fee-paying big-game hunters, are welcomed in.

Botswana’s Bushmen have faced arrest, beatings and torture in the name of ‘conservation.’ © Survival International

The “Parks Need Peoples” report examines current cases of eviction, such as the Baka “Pygmies” in Cameroon; the Bushmen in Botswana; and tribal peoples in India’s tiger reserves. But this model of conservation can be traced back to the creation of Yellowstone and Yosemite National Parks in the 19th Century in the United States, which led to the brutal eviction of Native American tribes.

Bushman Dauqoo Xukuri from the Central Kalahari Game Reserve in Botswana said, “I sit and look around the country. Wherever there are Bushmen, there is game. Why? Because we know how to take care of animals.” 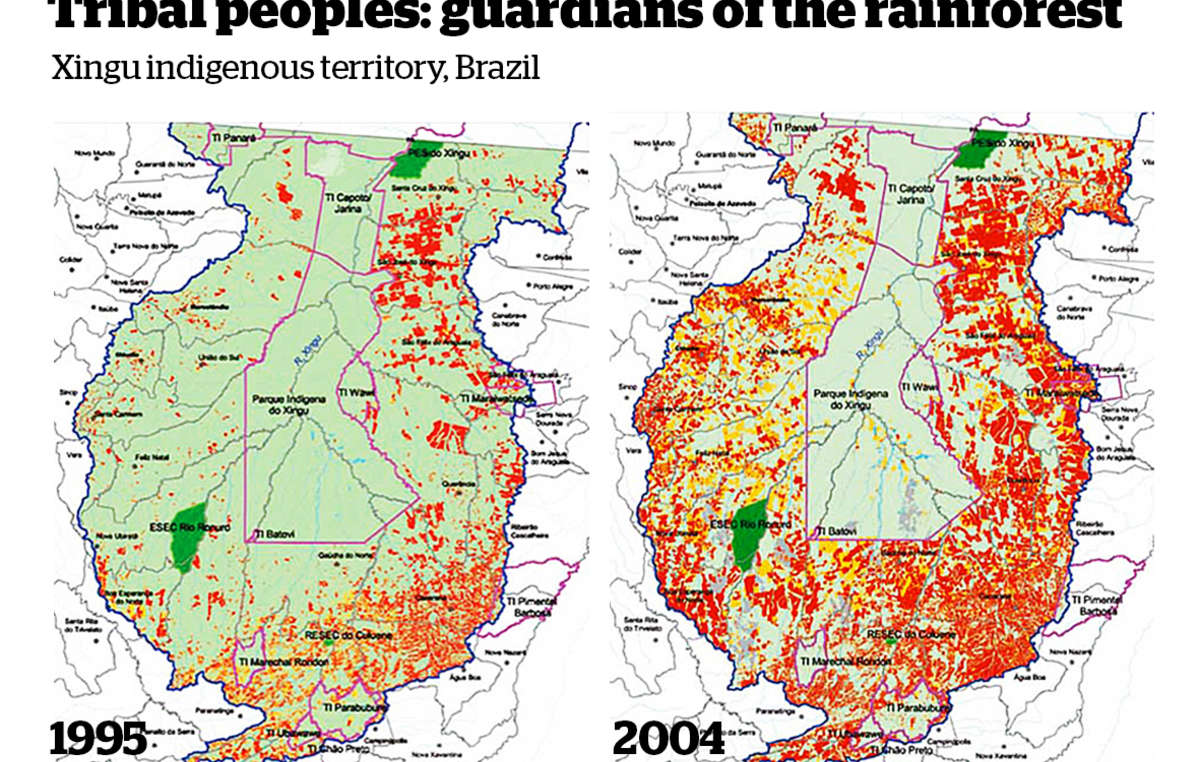 The Xingu Indigenous park (outlined in pink) is home to several tribes. It provides a vital barrier to deforestation (in red) in the Brazilian Amazon. © ISA (Instituto Socioambiental)

Survival’s “Parks Need Peoples” report concludes that the current model of conservation needs a radical shake-up. Conservation must stick to international law, protect tribal peoples’ rights to their lands, ask them what help they need in protecting their lands, listen to them, and then be prepared to back them up as much as they can.

Survival’s Director Stephen Corry said today, “Millions are being spent by conservationists every day, yet the environment’s in deepening crisis. It’s time to wake up and realize that there is another way and it’s much, much better. Firstly, tribal peoples’ rights have to be acknowledged and respected. Secondly, they have to be treated as the best experts at defending their own lands. Conservationists must realize it’s they, themselves, who are junior partners.”