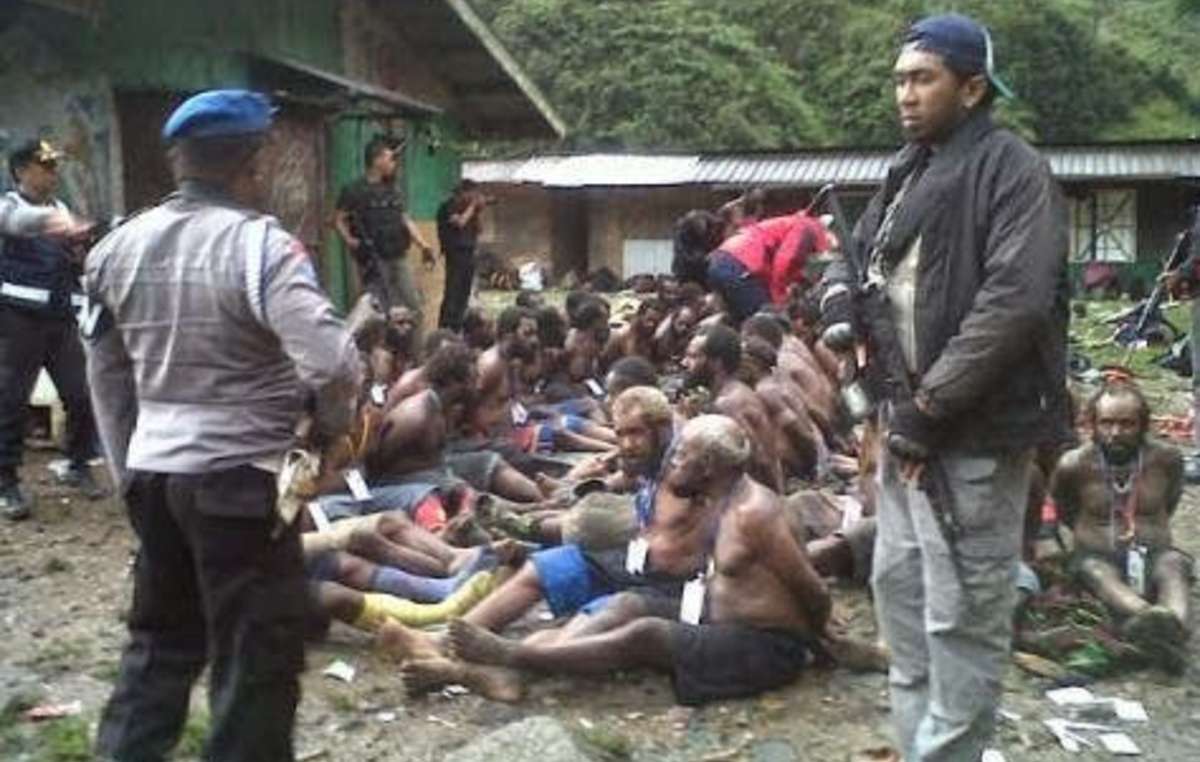 Papuan villagers were stripped to their waists and had their hands tied behind their backs before being interrogated by police. © local media

Hundreds of Papuan tribal people have fled their homes following a brutal military operation in the Papuan highlands. The crackdown is happening close to Grasberg – the world’s biggest copper and gold mine.

On January 7, hundreds of police and soldiers targeted the highland village of Utikini following the killing of two police officers and a security guard from the mine.

Pictures have emerged, probably taken as ‘trophy photos’ by soldiers or police, of Papuan men stripped to their waists with their hands tied behind their backs. Villagers report that 116 Papuans were arrested, including 48 women and 3 children. The police interrogated and tortured many of them. Twelve remain in police custody.

Survival International has received reports that, in a nearby village, Jekson Waker was shot twice in the feet, to ‘keep him still’. The soldiers and police have burned houses and tents belonging to members of the Dani, Amungme, Damal and Moni tribes.

Police allegedly found that many of the villagers had cards supporting Papuan self-determination. Such political expressions can be dangerous in West Papua, where people are jailed for up to 15 years for simply raising the West Papuan flag.

Activists have reported that during a press conference on January 7, an Indonesian Police chief said, “I ordered [them] to burn the civilians’ houses in Utikini village. This was deliberately done to trim the movement. I will annihilate them’.

The presence of so many police and soldiers has spread terror in the region and many have fled their villages and are hiding out in the jungle. Military sweeping operations such as these are commonplace in West Papua, where soldiers and police kill, rape and torture with impunity.

This incident comes just weeks after the fatal shooting of five Papuan teenagers by soldiers and police. Indonesia’s new President condemned the killings and called for a fact-finding team to investigate the deaths. However, many Papuans remain unhappy that it took the President 20 days to make a statement, and have little faith that justice will be done.